Lessons in Community From the Jasper Marching Band 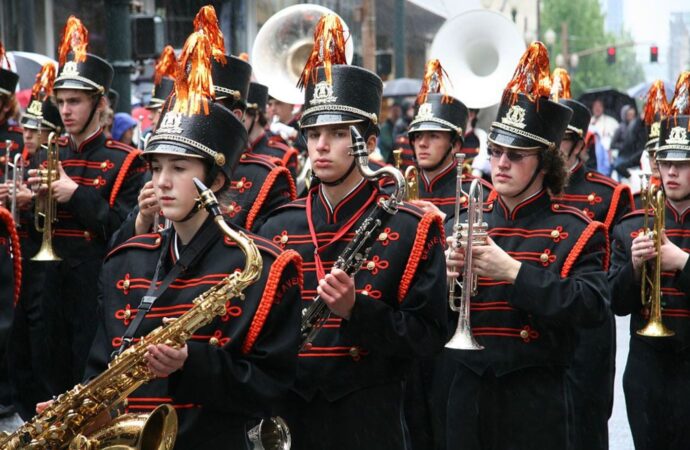 It is in our small towns, tossed and scattered across the heartland—these local communities from which my band so proudly hails—that we find our greatest opportunity to salvage the American republic.

For many years I listened to the recitals and drills occurring in the distance at the high school just two blocks from my home. It was in the evenings after school, of course, that I heard the truncated blasts of the winds, the blares of the brass, and the staccato of percussion, loud and abrupt as the autumn twilight faded, the cool temperatures descending upon the tormented students marching stoically into the long night. Stopping and starting in some manic pursuit of an unattainable vision, this rabble was eventually magically transformed into a silvery, mellifluous, marching band.

Above the din was a voice from Mt. Olympus, emanating from a Zeus-like figure, the director. Scolding, hectoring, commanding his young minions to hasten or slow, play louder or softer, the director always demanded better performance from his weary foot soldiers in the quixotic quest of excellence.

I could not imagine then what possible reward could justify the prolonged agony, the competitions and recitals, and the grand effort and machinery and force of numbers required to produce so elaborate a display. I certainly never imagined I would subject my own children to such chaos and tribulation. Yet now I must applaud the Jasper Marching Band and all the students, teachers, and parents that pour themselves into it. For there is really nothing like marching band for bringing forth the best of the republican virtues we need so desperately today: initiative, discipline, teamwork, and devotion to a cause greater than the self.

My perspective on marching band changed when my young children blossomed into adolescence and joined the ranks of their storied colleagues. They, too, were subjected to the discipline, symmetry, and beauty that made up one of their town’s most historic and splendid institutions. And with their participation, the rest of the family also got involved in this community endeavor.

My wife and I and our two youngest children would slavishly attend the band’s every performance, fascinated, uplifted, and unable to deny its charm. Civic pride took over and I found myself preparing burgers at district and football games like other band parents. I involved myself in fundraisers. I followed the progress of the band, the weekly report from the principal, the bombastic ruminations of its quirky but beloved director, marking my calendar, and checking my schedule. My life was no longer my own: I was a member of a team, an appendage of the marching band to which I swore unflinching fealty.

Our band’s performance at State was its best and I was convinced of their inevitable triumph. But then I watched in despair as two judges delivered unto our lions a fourth-place rank, causing them to fall behind bands our team had defeated handily only a week before.

The disappointment was profound. I had become identified with the band. Their unjust loss was my own, and, in truth, I am still in mourning.

Yet the memory of the season, the exhilaration of the band’s performances through the year, lingers. I find myself reliving the moments through videos and photos, as if unable to relinquish it, almost wishing it could go on, despite my many other obligations. Such had become my attachment to the hardships and travails of the band. And it is in such attachment that we see a beacon of hope for America.

It is in our small towns, tossed and scattered across the heartland—these local communities from which my band so proudly hails—that we find our greatest opportunity to salvage the American republic. It is here that we hold fast to the formerly mainstream verities of hearth and home, faith and family, God and country. Here, we cling to the customs and mores of a commercial republic, based on the principles of liberty, limited government, and private property rights. And as seen in the instance of our local marching band, it is here that we uphold such quaint notions as sacrifice, dedication, and the pursuit of one’s dreams—all nurtured in an ambience of Judeo-Christian ethos, family, church, civic associations, and community.

Small communities still recoil at noxious ideologies such as critical race theory, radical feminism, and transgenderism. We shudder at the horrendous damage and moral anarchy that has culminated in widespread illegitimacy, dysfunctional families, welfare dependency, drug addiction, and criminality. We are aghast at the relentless indoctrination of our youth in our entertainment, films, social media, and, especially, our schools and woke churches. It is in these local communities that there remains an appetite to stand athwart the cult-Marxist wave and preserve our way of life.

At the national level it appears we are broken, hopelessly divided between two competing visions. But it is at the local level where we may succeed, attending school board meetings, petitioning our county commissioners, and lobbying our city councils. Locally, we are best positioned to defend our beliefs, and preserve the sanctities and traditions that bind a community and a society, and allow a people to thrive and flourish. Here, we can best defend American values and Western civilization, beginning the long march through our institutions to retake them—or to create new ones.

The spiritual rot is deep, the chaos profound. But there remain shoots of life, sprigs and seedlings of truth, beauty, and goodness across the vast expanses of the continent, and, yes, they flourish in small towns like Jasper, Indiana, with its illustrious high school marching band.