BBC Dad Isn’t a Tool of the Patriarchy. He’s All of Us Who Balance Work and Family 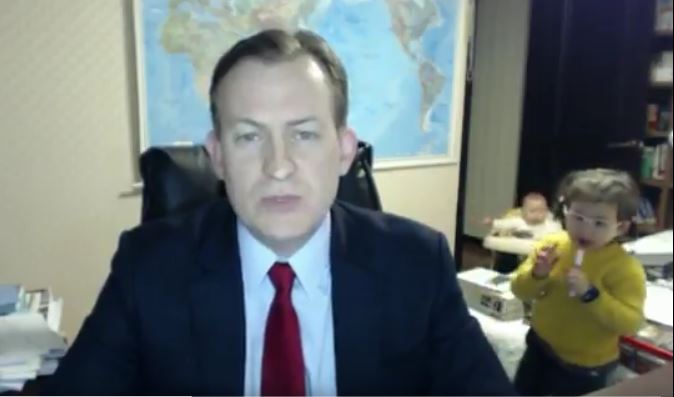 Is Robert Kelly just another tool of the patriarchy? That’s the question circulating on the Internet after the video of Kelly, forever to be known as “BBC dad,” went viral. Thirty million views later, people may be running out of things to say about the hilarious scene when Kelly is trying to speak seriously on the subject of South Korea while his two children wander into the room.

But not Moley Tant at the website of the New Statesman. The columnist writes:

“Basically, the message this video delivers to me is: being a man is playing life on the easy setting . . . Here’s the worst/best bit of the video. When Mr. Pundit doesn’t even turn round to acknowledge his child, but instead gives the little tyke a gentle shove to get out of the way.”

Tant insists that if a woman had done that we’d think she was a terrible mother. She further indicts Kelly because he “shoves the kid back with the easy reassurance of someone who knows that another person is going to swoop in and deal with the kids. This, you feel, is the kind of guy who refers to looking after his own children as ‘babysitting.’”

This, you feel, is the kind of comment that makes men feel as if they can never win.

Like Tant, I have no idea what kind of father Robert Kelly is, but the guy is working from home. Fathers who believe that looking after their own children is “babysitting” are generally miles away from the smell of diapers. As for how we would judge a woman pushing her child back in this way, perhaps she’s right. We would be harsher, but I’ve seen plenty of women lose patience with children (and even forget that they are children) when a professional commitment is competing for their time.

The reason, of course, that the video gained the popularity it did is that so many of us do work from home or live on the verge of some similar embarrassment. It would be hard to count the number of times when my kids were smaller that I had to take a work phone call or do a radio or Skype interview while I was on parenting duty. Pleading with toddlers not to make a peep, praying that a baby won’t wake up from a nap early, sitting them in front of the television and hoping they won’t want to change the channel—I’ve been there.

Sometimes this situation couldn’t be helped. But sometimes I was cheating. I was telling myself that I was spending the afternoon taking care of my children, but really I wasn’t. I was multitasking, but as with so much of what happens with multitasking, I wasn’t doing anything well. I wasn’t focusing on the work conversation and I wasn’t paying attention to the kids. I kept putting them off and the more they demanded my attention, the shorter I became with them.

Fathers are often criticized for not multitasking as well as women do. My husband once marveled that I was emailing him about picking up children, posting thoughts on twitter and eating lunch all while being interviewed for a live national radio show. But there is something to be said for focusing on one task at a time. You could take Robert Kelly to task for not knowing how to focus on questions about South Korea while warmly ushering his children toward the exit, but let he who is without sin post the first mean Twitter comment.

This blog post has been reproduced with the permission of Acculturated. The original blog post can be found here.