A while back I started an experiment of smiling brightly at perfect strangers while out and about doing my daily routine. Knowing that times are difficult, my intention was to bring a little joy into random people’s lives, while also causing them to wonder where my joy came from.

Admittedly, I don’t always practice this habit, for my personal problems and the cares of the world can get me down, making it hard to try to lift others up with a friendly smile. But I’m inspired to go at this practice with more vigor after seeing a chart from Gallup on the rise of unhappiness. 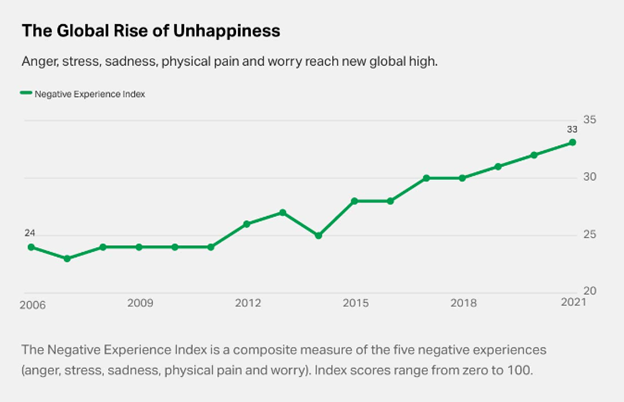 As you can see, unhappiness began to rise around 2012, particularly gaining speed in the last several years. And in thinking about this rise and its possible causes, I began to see a way we could start that unhappiness index on a downward trend.

What happened between 2011 and 2012? One important thing was the release of the iPhone 4S. Sure, iPhones had been around for a few years, but the iPhone 4S was the iteration that greatly expanded the megapixels on the camera and made video much more possible. Combined with the forward-facing camera introduced the year before, the selfie culture was born.

Perhaps the fixation on self was palpable in society, for it was right around this same time that David McCullough Jr. gave his rather famous commencement speech, “You Are Not Special” at Wellesley High School in Massachusetts. McCullough encouraged students not to expect everyone in life to cater to them, but to work hard and live fulfilled lives, avoiding self-indulgence. The American founders worked hard to ensure that future generations could pursue life, liberty, and happiness, he said, so we shouldn’t squander such a gift by sitting and watching videos on YouTube.

Instead of self, McCullough urged students to seek wisdom. “Wisdom is the chief element of happiness,” he said, quoting Sophocles. So, if we are to reverse the rising swing of unhappiness, it seems the best way to do it is by infusing the culture with wisdom.

But where do we get that wisdom? A Proverb of Solomon, presented in one of his famous chapters on wisdom, suddenly echoed in my head, providing the answer: “The fear of the Lord is the beginning of wisdom: and the knowledge of the holy is understanding.” If wisdom is the main component of happiness, and wisdom is found by following and understanding God, then could the rapid rise in unhappiness be related to our rejection of God?

Such a thought led me to once again track down Pew Research’s chart of religious “nones,” or those Americans who don’t identify with any religion. In 2007 that number was around 16 percent but rose rapidly to 29 percent by 2021. Judging from the chart below, much of the increase has come since around the year … 2012. 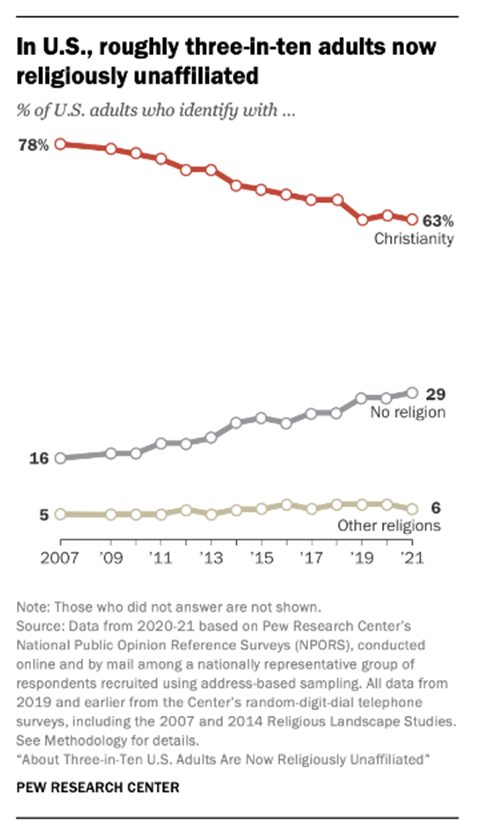 “Nonsense!” I can hear many exclaim. “Religion and following God has nothing to do with happiness!” Such protests have likely been around for years, a fact evidenced by author Alexis de Tocqueville’s mid-1800s work, Democracy in America. After discussing the great importance religion had in America he wrote:

The free American nation, Tocqueville maintained, was free for the very reason of its religious or Christian nature. In fact, Tocqueville believed that Americans would say it was in their best interest to ensure that new states founded during America’s westward expansion must “be religious, in order to maintain our liberties.” And it is those same liberties that inform and aid our happiness, also, including the freedom of religion.

Many Americans are miserable and others will likely grow unhappy in the coming years. That’s tragic, especially since there’s something we can all do about it, namely, stop looking at ourselves and start looking toward God. Only through Him will we find the wisdom that leads to true happiness.