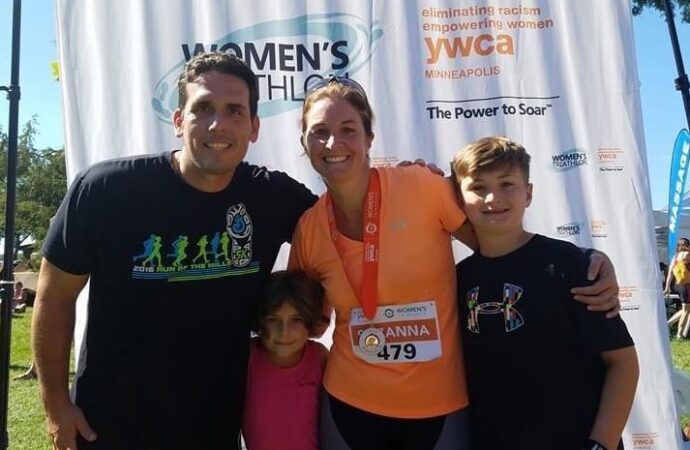 Suzanna Newell was a triathlete and an active mother and working professional when she first received the COVID-19 vaccine. Now she has small fiber neuropathy and has difficulty accomplishing basic tasks.

For St. Paul resident Suzanna Newell, there’s life before the jab and life after the jab.

Suzanna got her first vaccine dose in late March 2021. Her second shot came on Apr. 13, 2021, and two days later she became very sick and never recovered. In fact, her symptoms have worsened in the past year.

Before willingly taking the COVID vaccine early last year, Suzanna was an active 49-year-old wife and a mother of teens, a triathlete, and a working professional. After the vaccine, she has suffered debilitating illnesses including extreme leg pain, dizziness, and fatigue. She experiences “brain fog,” intense tinnitus, and joint pain. She’s been diagnosed at a University of Minnesota clinic with small fiber neuropathy, a condition affecting the peripheral nervous system and often causing severe pain.

Suzanna can’t go to the mall with her daughter without a walker or a wheelchair. She cannot go to her son’s or daughter’s athletic events unless she wants to endure intense pain while sitting to watch. Small chores like chopping vegetables are so physically taxing that she needs to take breaks while doing them. “It hurts just to sit, down my spine, and joint pain,” she said. Her heart rate can be erratic—one minute it’s palpitations; the next, her blood pressure falls very low.

Suzanna receives disability benefits through her employer but would like to be working full-time in financial services, as she had done for more than two decades before she got the vaccine.

Yet in spite of the painful new life Suzanna leads, she also has hope for the future. “I will do it again,” she said, when asked about her experience as a triathlete.

As she pushes toward that and other goals—like researching and finding resources to treat the vax-injured—the federal government is playing dumb about the reality of these injuries. While there is still emergency rental assistance for people whose work was affected by the pandemic shutdown, “There’s no safety net for vaccine-injured people,” Suzanna says. “Now, all my savings are going toward medical expenses. If you don’t have disability from work, who’s going to support you?”

Because of a 1986 federal law, you cannot sue pharmaceutical companies, Suzanna said, noting that the Vaccine Injured Compensation Court was created at that time. But COVID vax-injured folk aren’t included in that fund.

“I know people living out of their cars, I know people who’ve committed suicide. … These peoples’ bodies are damaged, and the doctors are afraid to even mention the vaccine.”

During her search for answers to her illness, Suzanna has learned a lot about vaccines, the Vaccine Adverse Event Reporting System (VAERS), the stonewalling tactics of government officials, and more. And she has learned to find community and fellowship with others who are vax-injured and with those trying to help them. She has joined the board of directors of the advocacy group, React19, and administers the Facebook group “Team Humanity.”

But Facebook has flagged as disinformation the factual posts Suzanna and her husband, Pedro, have made about this widespread problem of vaccine injuries.

“Why have my First Amendment rights been taken from me?” she asks.

It is a fair question. After all, she had trusted the government, expecting that the vaccine was safe.

“I was one of the first people to get it. I wasn’t nervous about it. I was proud—I felt I was doing my part, helping my country,” she said.

She got the vaccine because she worried that without it, she’d get COVID, passing it on to her mother and older sister, both of whom have health problems and for whom she was a caregiver. Now, she’s the one whose health is compromised.

Early on in her illness, Suzanna visited her primary physician. As they discussed test results, she questioned whether she might be imagining her vaccine reaction—whether the symptoms were simply another easily explained physical malady.

But unlike Suzanna, many patients have their symptoms and concerns disregarded by medical officials, so many of the injured naturally fear talking about their vaccine injuries or their mental health because they don’t want to be pegged as a hypochondriac … or worse.

Editor’s Note: Have a vaccine-related story that you would like to share? Email our editors at [email protected] with your contact information and a brief description of your experience to help our editors with the selection process.