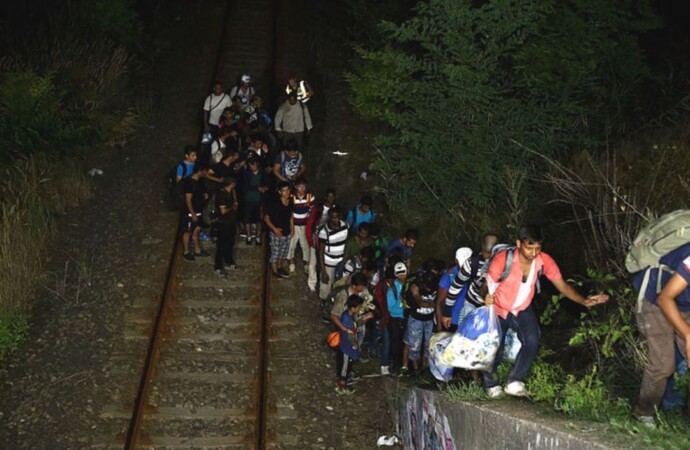 With Biden welcoming migrants crossing illegally and helping them settle wherever in the U.S. they choose, every state becomes a border state.

Millions of Americans are paying taxes this week. What worsens the pain is to see President Joe Biden spending our tax money on hotel stays, debit cards, and cellphones for migrants illegally crossing the southern border.

Biden is rolling out the welcome mat.

Illegal border crossers will no longer be treated like criminals but more like customers. The president’s fiscal budget, presented March 28, cuts funding for Immigration and Customs Enforcement by 8 percent despite an expected surge in migrants and reduces detention beds. Meanwhile, Biden’s increasing funding for a speedier service for migrants entering the country illegally, with more flights and ground transportation. Kind of like a travel agency.

As of late May, Customs and Border Protection officials will not be able to send back migrants using Title 42, a legal tool devised to limit immigration during COVID-19. Illegal immigration is predicted to surge to 18,000 people a day. Biden isn’t planning to deter it, only to accommodate it.

There will be no punishment for sneaking into the country, or what the White House prefers to call “irregular” immigration.

Migrants won’t be detained in crowded facilities, sleeping under metallic sheets. These facilities are being phased out.

After crossing and being apprehended, migrants are fingerprinted and handed an Order of Release and Recognizance, granting them a legal right to travel in the U.S., so long as they report to an ICE officer when they reach their destination.

Then they’re welcomed by Catholic Charities or other nonprofits, who help with travel instructions. Some are taken directly to bus stations or airports. But many others are checked into hotels for one or two days of R&R before continuing to the destination of their choice. Call it the Catch and Concierge experience.

Over the last year, the Biden administration has contracted hotel space in Scottsdale, Arizona, El Paso, Texas, and other sites to house migrants while they’re provided COVID screening, medical care, hot meals and a chance to shower and rest. What’s next? Mints on the pillow?

Hotels were used in the past to house migrants but only because detention facilities were full, not because they were replacing them.

Don’t think because these charities are helping that taxpayers are off the hook.  The federal government is Catholic Charities’ largest source of funds, and Jewish Family Service gets its money largely from Catholic Charities. Illegal immigration is funded in a tangled maze that invariably leads back to U.S. taxpayers.

That’s who’s paying for the smartphones and tablets for migrants—the latest perk. White House press secretary Jen Psaki claims the devices will make it easier to track migrants. Border officials, according to the Los Angeles Times, insist the smartphones are for safer travel, not tracking. Migrants can simply throw the device away.

Previous administrations used ankle bracelets, but immigration advocates complained they were uncomfortable and humiliating, so the Biden administration discontinued them.

Even before migrants cross the border, the International Organization for Migration, a part of the United Nations, distributes plastic debit cards worth about $400 to help tide over migrants waiting to enter. Where does IOM get its money? Partly from America, of course. Twelve House Republicans introduced the “No Tax Dollars for the Immigration Invasion Act” to bar funding these cash giveaways.

With Biden welcoming migrants crossing illegally and helping them settle wherever in the U.S. they choose, every state becomes a border state. Taxpayers in all 50 states are clobbered with the cost of providing housing, emergency medical care, and public schooling. Dems in New York, who have no mercy on taxpayers, are even extending Medicaid to migrants 65 and over illegally in the U.S.

Americans are generous people, but they have to provide for their own kids and neighbors first. Without warning, Biden is flying migrants into communities under the cover of night and expecting them to be cared for. It’s nothing short of an ambush.