When Free Pre-K Is Worse Than No Pre-K 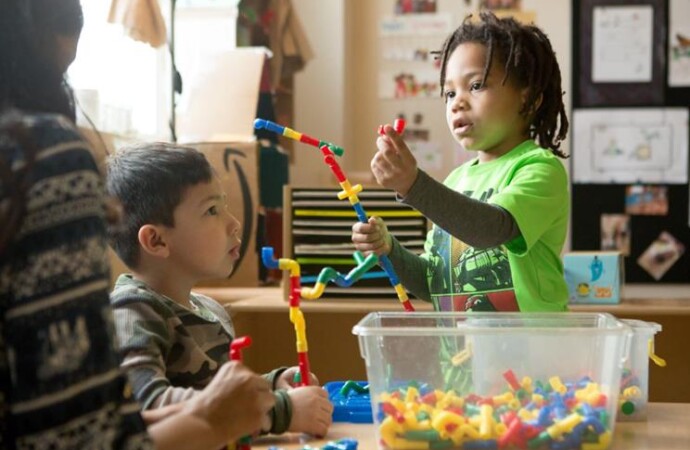 Dale Farran spent a decade studying over 1,000 kids who went to a state-run pre-kindergarten—and a control group of kids that wanted to, but didn’t get in. She is shocked and dismayed by what she discovered:

By 6th grade the pre-K kids were doing worse all around: worse reading, math and science scores; more learning disorders; and more discipline problems, including serious ones that got them suspended.

“It really has required a lot of soul-searching,” Farran told Anya Kamenetz on NPR. Now she’s pondering “what were plausible reasons that may account for this.”

One theory she has is that the free pre-K doesn’t look like pricey pre-K. Well-off parents usually send their kids to programs that have lots of art, music and unstructured play. Heck, the richest kids get to play in the forest with sticks.

But in the preschools attended by the poor, Farran was seeing kids stuck tracing letters on worksheets, or listening to lectures—five and a half hours a day of instruction. They also spent a ton of time simply getting from one activity to another.

Her study arrives at either the best or worst time, as talk turns to reviving President Joe Biden’s “Build Back Better” proposal to provide free, state-run preschool for all 3- and 4-year-olds.

Dr. Peter Gray, a Boston College psychology professor and co-founder with me of Let Grow has written, “If this study doesn’t put the nail in the coffin of academic training to little children, it’s hard to imagine what will.”

Here’s how the study unfolded: About 3,000 kids applied for the free pre-K program, open only to low-income families in Tennessee. A lottery determined who got in, creating two demographically identical groups: the “winners,” and the “control group,” on their own till kindergarten.

The majority of the kids in the control group were simply cared for at home. The rest were pretty evenly divided between Head Start and private child care.

Gray believes these outcomes were predictable. When kids are pushed into academics before they are ready, they feel lost, bored and dumb. Compare that to plain old playing, where kids learn how to make things happen, try out new ideas and make friends. Those are real lessons—some of life’s biggest. There’s time for academics later.

This is something the Germans figured out 50 years ago. In a Psychology Today piece, Gray recounts an enormous educational experiment in the 1970s:

The German government was trying to decide whether it would be a good idea, or not, to start teaching academic skills in kindergarten rather than maintain kindergarten as purely a place for play, stories, singing, and the like, as it had always been before. So, they conducted a controlled experiment involving 100 kindergarten classrooms. They introduced some academic training into 50 of them and not into the other 50.
The graduates of academic kindergartens performed better on academic tests in first grade than the others, but the difference subsequently faded, and by fourth grade they were performing worse than the others on every measure in the study. Specifically, they scored more poorly on tests of reading and arithmetic and were less well-adjusted socially and emotionally than the controls.


Taking these results to heart—and, even better, policy—the Germans decided not to pursue academic pre-K and to keep it more play-based. This is something that researcher Farran is considering now, too: Maybe little kids don’t need intensive training.