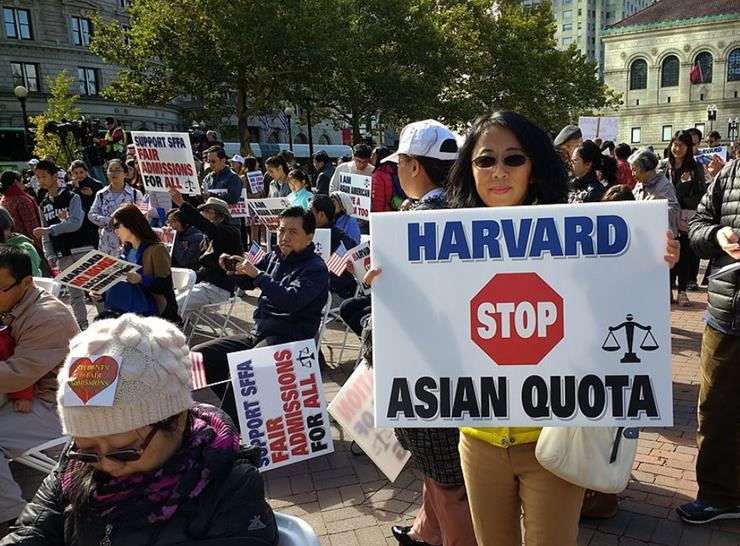 Americans are fed up with racial preferences.

More than three-quarters of Americans believe President Joe Biden should consider “all possible nominees” to succeed retiring Supreme Court Justice Stephen Breyer, rather than only Black women, according to a new poll.

Likewise, nearly three-quarters of Americans, including a majority of Hispanic and black people, oppose affirmative action. They don’t want black and Hispanic college applicants favored over other applicants who have higher test scores and grades, according to Pew Research.

A group of Asian victims of Harvard’s affirmative action are suing, represented by the nonprofit Students for Fair Admissions. The Supreme Court announced last week it will take the case.

That announcement has provoked woke outrage and predictions about the return of Jim Crow. Georgetown University law professor Paul Butler warns the Court will “take this country back to the time where straight White men ruled everything.” There isn’t a shred of truth to that warning.

Court papers document how Harvard rigs the admissions system to disqualify as many Asian applicants as possible. It systematically gives Asian teens low “personal” scores for subjective qualities such as courage and personality in an attempt to offset their higher scores on standardized tests.

A black student with a Preliminary SAT score above 1100 might get invited to apply to Harvard, but a white student from the same area of the country would have to get a score above 1310; an Asian girl would need at least 1350, and an Asian boy at least 1380. Unfair? You bet.

It’s a repeat of what Harvard did in the 1930s to keep Jews out, according to Kenneth L. Marcus, assistant secretary for civil rights in the Trump administration’s Education Department. “Just as Harvard in the 1930s thought that Jewish students lacked the character to make them good Harvard men, so today they often view Asian students as lacking the appropriate character,” Marcus said.

The Supreme Court never intended affirmative action to be permanent. In 2003, when it upheld the University of Michigan Law Schools’ use of race to promote diversity, Justice Sandra Day O’Connor wrote, “The Court expects that 25 years from now, the use of racial preferences will no longer be necessary.”

Fast forward, and the evidence is clear that affirmative action failed and should be replaced by programs that give a leg up to the poor, regardless of their skin color.

Harvard could do the same. Only 4.5 percent of students admitted to Harvard come from households with incomes in the bottom fifth of the nation. Many black students admitted are children of academics and professionals. Yet they’re pushed ahead of Asian applicants whose parents are first-generation unskilled workers.

Diversity the way Harvard and many other universities practice it is a scam. In reality, it gives privilege to black students.

Take Biden’s two leading candidates for the Supreme Court: federal Judge Ketanji Brown Jackson and California Judge Leondra Kruger, both Harvard College graduates, Jackson’s father is a lawyer; Kruger is the daughter of two physicians. Both women are cookie-cutter duplicates of the court’s current makeup—Ivy Leaguers who once clerked for the Court.

For real diversity and fairness, Biden should consider a broad field, including Chief Judge Sri Srinivasan of the District Columbia Court of Appeals, who has not only a law degree but also a business degree. That’s something none of the current justices has, though business cases dominate the Court’s docket.

It’s time for America to end affirmative action. It’s a polite euphemism for an ugly process—reverse discrimination. It hasn’t made the U.S. economically fairer, and another 25 years won’t change the results.