The Silver Lining in Single-Income Families 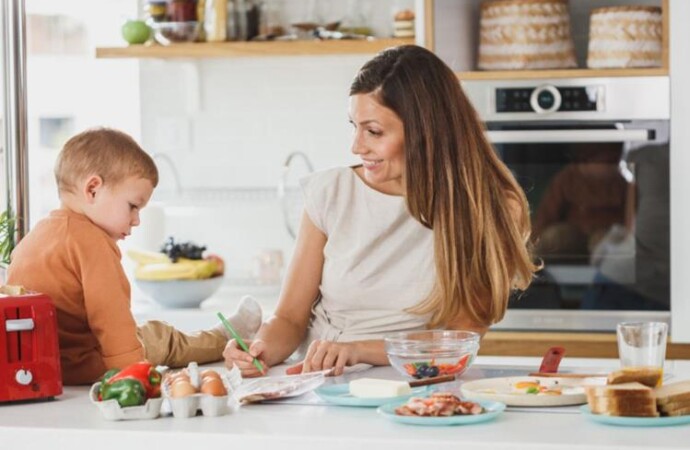 There have been countless repercussions from COVID so far, and it’s likely that more are on the way. Most of these repercussions are negative, but every once in a while, there’s one with a silver lining.

I saw one of these the other day while on Twitter, where Scott Adams—of Dilbert fame—shared a chart showing the change in private employment over the last year. Most drastic, and the first decline, was the drop that occurred from December 2021 to January 2022. In December, there was an increase of 776,000 jobs in the non-farm private employment sector, while in January, there was a decrease of 301,000 jobs in that same sector, revealing a sharp turnaround in the trend. “Too hard to find employees?” Adams speculated.

What is even more intriguing, however, is a response Adams received from a man named Mark Schneider. “There is a shortage of people, especially professionals,” Schneider wrote. “I think the pandemic may have triggered a return to single income families.”

I received an offer on LinkedIn and a phone call just this week.

I am also taking a new position in a week.

There is a shortage of people, especially professionals.

I think the pandemic may have triggered a return to single income families.

And there’s the silver lining: perhaps the pandemic is causing a pendulum swing back toward a better balance between work and home-life, something more conducive to successfully raising children and supporting marriages.

The theory that women are leaving the workforce and staying home was confirmed by a recent Washington Post article, which explains that although the U.S. added nearly 500,000 jobs in January, the gender divide is very evident in that growth, for the more than 1 million women who left the workforce at the start of the pandemic still haven’t returned to it. “Until January, women hadn’t seen such low labor force participation since the late 1980s or early ’90s,” Emily Martin, a vice president at the National Women’s Law Center, told the WSJ.

While the folks at the WaPo greet this decline of women in the workforce as a tragedy, I think it is a wonderful thing for the members of my sex. In recent decades, the modern woman has been expected to hold down a job in the workforce. Society treats her as a loser if she stays home, cooks the meals, cleans the house, and raises and educates the children. Because of this, many bright, ambitious, young women forego the joys of marriage and a home, spending their days toiling in an office, or they try to hold down a job and raise a family and maintain a home, growing increasingly stressed as they go because too many responsibilities leave all of them compromised in practice. It seems the women’s movement, which was supposed to liberate the female sex from the confines of her life, has only served to put her in a tighter straitjacket.

Author G. K. Chesterton predicted this constriction—long before it bound contemporary women hand and foot—in his 1910 book, What’s Wrong With the World. He explained how women are capable multitaskers in so many things—cooking, telling stories to children, thinking deeply and lending new insights to life. Men are unable to do such a wide variety of things simultaneously, as their wives can do, because men are forced to be single-minded experts in the job they hold outside the home. Chesterton contrasts this role of a man with that of a woman:

In reality, the woman who stays at home is not confined but is really the one free to fly and pursue all kinds of opportunities to engage in important work. Chesterton goes on to clarify the point further:

This is what has been really aimed at from the first in what is called the seclusion, or even the oppression, of women. Women were not kept at home in order to keep them narrow; on the contrary, they were kept at home in order to keep them broad. The world outside the home was one mass of narrowness, a maze of cramped paths, a madhouse of monomaniacs. It was only by partly limiting and protecting the woman that she was enabled to play at five or six professions and so come almost as near to God as the child when he plays at a hundred trades.

Call me a misogynist if you wish, but I tend to agree with Chesterton. And I tend to think that the million women who have not returned to work since the pandemic might have come to the same insight—by way of their own experience. Women are not dumb; the pandemic gave them a taste of what Chesterton calls “sanity,” a sanity which allowed them to find true fulfillment in the broad nature of the home—and they’ve discovered that they don’t want to leave it.

Such a flight from the workforce and back to the home is bound to have life-changing repercussions for the whole country. It strengthens marriages when women are freed to maintain happy homes for their husbands (and for their children). Such freedom also often leads to a more active counterbalancing of the propaganda machine at school and gives parents a chance to educate and influence their children in more wholesome and healthy ways.

Granted, relying on a single income may not be possible for everyone at a time when prices are rising rapidly through inflation. However, one can even argue that the family budget will not suffer much when one considers the elimination of costs associated with the woman’s employment—gas, lunch money, wardrobe, childcare, etc.—combined with a new reason to develop the skill of a more intentional frugality.

The world desperately needs sanity. Why not encourage more of it by bringing more mothers home?