Let’s Hear it for Risky Playgrounds 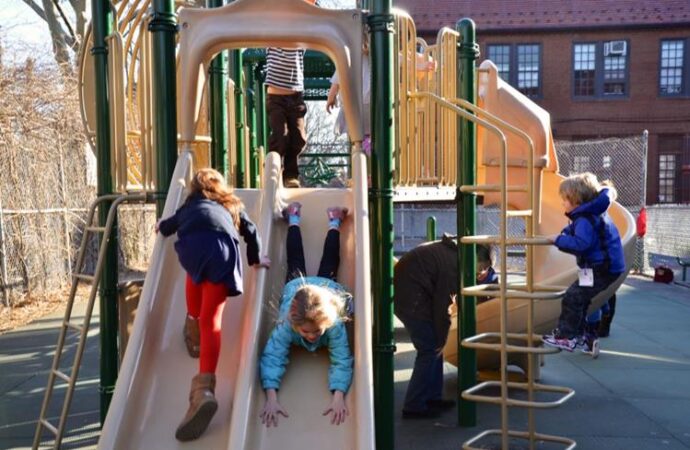 Germany is adding MORE RISK to its playgrounds. Some of its climbing structures are now three stories high. And who is requesting this?

“This is fantastic progress in understanding childhood as the right time for children to learn to recognize and mitigate risk,” says Gever Tulley—who should know. He’s founder of the SF Brightworks and Tinkering School in San Francisco and author of “50 Dangerous Things You Should Let Your Children Do.”

An influential German study in 2004 had found that “children who had improved their motor skills in playgrounds at an early age were less likely to suffer accidents as they got older,” writes reporter Philip Oltermann in The Guardian. He adds:

With young people spending an increasing amount of time in their own home, the umbrella association of statutory accident insurers in Germany last year called for more playgrounds that teach children to develop ‘risk competence’.

That’s music to an actuaries’ ears—and also to some parents.

My friend Siobhan is a New York native who moved to Germany. A few years ago, when her daughter was in elementary school, she says,

The school replaced the standard playground equipment with four long, thick trees with their branches removed, all interconnected with wide ropes and wobbly bridges made of rubber. The whole thing was maybe 6 feet at the tallest point. But the trees had been polished so they were slippery.

Sure enough, says Siobhan, the very first week they were installed,

A girl fell off and broke her arm. As an American, I nervously anticipated the outrage that would surely follow. My heart was in my throat as I eavesdropped on the other parents at pick-up the following day. What did I hear? ‘Children need to learn their limitations!’

No lawsuit? No, “Tear this thing down?” Siobhan was thrilled.

This more accepting approach to risk is starting to take hold beyond Germany, says Tim Gill, author of “Urban Playground: How Child-Friendly Planning and Design Can Save Cities.” “Even international safety standards organizations—so often the ‘fun police’ when it comes to playgrounds—are coming round to a more balanced, pro-risk view.”

While the appetite for risk here in America is perhaps a little slower to develop, New York City built its first adventure playground, The Yard, in 2016, complete with hammers, nails, plenty of wood and saws. It stands by its credo: “No parents allowed.” And as a denizen of play conferences, I can attest that a lot of play scholars are eager for more exciting playgrounds.

Unfortunately, that runs smack into our culture’s habit of underestimating kids, overestimating danger and hiring trial lawyers. In 2019, a family that had sued the Howell Township, NJ, school district when their daughter fell off the slide and broke her arm won a settlement of $170,000. Their lawyer had argued that the slide’s slope was too steep, as it was at a 35-degree angle, rather than 30.

Perhaps out of fear of just that kind of thing, one school district—Richland, Washington—just plain got rid of its swings, arguing that, “Swings have been determined to be the most unsafe of all the playground equipment.”

Yeah. Because all the merry-go-rounds and seesaws have already been uprooted.

Thus does American childhood remain, for the most part, a mulch-chip, no-slip, primary-colored plastic safe space. Or, as a German insurance exec might put it, a risk-ignorance breeding ground.