Debunking the Myths About WWII 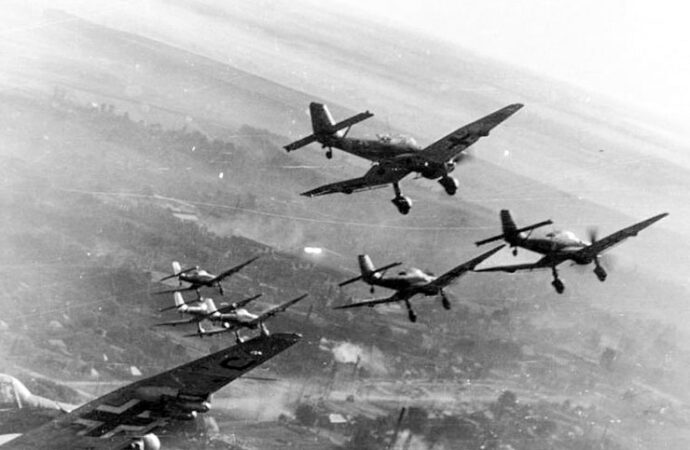 Victory in Europe Day is observed each year on May 8, remembering the key contributions of the United States and Britain to Germany’s defeat. The following day, May 9, commemorates the Day of Victory, which focuses on the crucial contribution of the Red Army to the collapse of the Third Reich.

As it happens, May 9 is also observed in the EU as Europe Day, supposedly to “celebrate peace and unity” in the Old Continent. It was established by the Council of Europe in 1964 as a German-instigated initiative to replace the theme of Allied victory (and by implication German defeat) with something pleasingly harmless. Over the years, Europe Day has morphed into yet another occasion to disseminate pro-EU propaganda, notably to open the doors of the Council and other EU institutions to the grateful public.

Different dates are commemorated in different places with different agendas, advancing significantly dissimilar narratives on the bloodiest conflict in human history. Rather than help debunk the distortions of historical record used to support those narratives, some professional historians additionally muddy the waters by endeavoring to dispel “the real biggest myths about World War II” which are neither real nor big.

One of these academics is Robert Citino, senior historian at the National World War II Museum in New Orleans. Hislist of “the real biggest myths” starts with the alleged myth that FDR knew about the pending Japanese attack on Pearl Harbor before it happened. Calling this a “myth” is to be expected from an establishmentarian on the federal payroll, but I beg to differ.

Citino’s second debunking target is the supposed myth that Erwin Rommel, a.k.a. “the Desert Fox,” was the greatest German general of all time. This is a red herring par excellence and cannot even be called a “myth.”

Hitler was solely to blame for the German defeat is the third myth on Citino’s list. “This notion is in 90% of the books written on the war in Europe,” he says, “which is that every mistake, every wrong turn the Germans made, every stupid offensive they decided to launch, was Hitler’s idea.”

Untrue. Admittedly I have not read every book written on the war in Europe (thousands of titles). If Citino has managed that feat, one has to wonder where he finds the time to sleep, or do any work linked to his taxpayer-funded position.

There is a broad consensus among historians of repute, however, that Hitler was the sole author of the grand strategy of the Third Reich, and that it was deeply flawed from the outset. He had consistently followed two obsessions—clearly outlined in Mein Kampf—which were cast in stone many years before the war: anti-Semitism leading to the Final Solution, and the striving for the Lebensraum in the East. His one, big, unavoidable mistake was to attack Russia. His subsequent narrative of the pan-European anti-Bolshevik crusade was a sham.

Operation Barbarossa was doomed to fail once Stalin realized that he could mobilize the twin resources of Russian patriotism and Christian faith, both of which had been brutally suppressed by the Bolsheviks. Hitler had at his service several very able generals—notably Gerd von Rundstedt—but they were never allowed to discuss, let alone implement, any operational plans which diverged from his instructions. Hitler’s core ideas doomed Germany, and that is no myth.

Citino’s penultimate “myth” is perplexing: that “Japan could have won World War II, if only the Japanese had bombed the oil depots at Pearl Harbor in addition to the ships.” Again, no reputable historian has ever allowed the slightest possibility of Japan “winning” the war against the United States. Bombing the oil depots in question would have been a minor operational snag for the U.S. Navy, without any significance for the outcome of the war. Another red herring.

Citino’s final “myth” asserts that there was no turning point in World War II. In fact, there were two turning points within six months, both irreversible: Hitler’s decision to attack Russia in June 1941, and his declaration of war against the United States in December of that year (which coincided with the collapse of Operation Barbarossa at the gates of Moscow). Even before its temporary territorial gains in 1942 in Eastern Europe and North Africa, Germany was utterly doomed. The carnage went on for another three-and-a-half years but its outcome was no longer in doubt.

Thus, it is difficult to not conclude that Citino is not a serious historian, but there are several myths about World War II which do need to be debunked.

First, that Poland was an innocent victim of Nazi aggression. In reality, the Polish government, dominated by breathtakingly self-confident military officers, doomed the nation in 1939 by refusing to consider the possibility of any territorial adjustments. “When attempting to negotiate with Germany or the USSR, Poland’s 1000 year struggle against the two nations produced a mindset where the very idea of compromise with either power was equated with weakness and national betrayal,” Wesley Kent writes. At the same time, to its discredit, Poland joined Germany in the carving up of Czechoslovakia in 1938. Martin Sieff reminded us of the score recently:

[T]he Polish government of the time flatly blocked every (half-hearted) effort by the British and French governments to negotiate a defensive alliance with the Soviet Union against Nazi Germany.
In the frank assessment of British historian Paul Johnson in his classic work ‘Modern Times,’ Poland in 1939 was ruled by an ugly racist junta that practiced extreme policies of apartheid against its Russian, Ukrainian and Jewish citizens alike. …
Polish junta leader Colonel Josef Beck was an idiotic buffoon who regarded himself as a genius. He liked to say that only three men counted for real power in Europe: ‘There is Hitler. There is Stalin. And there is – Beck.’

The second myth is that the French army collapsed in May 1940 because it was demoralized and unwilling to fight. In fact, it was comprehensively defeated by the Wehrmacht because of its commanders’ extremely poor generalship, embodied by its Commander-in-Chief, General Maurice Gamelin. The French suffered almost 100,000 deaths and more than twice as many wounded in the six weeks of fighting, which is on par with the bloodiest battles of the Great War.

Another common claim is that the strategic bombing offensive against Germany made a decisive contribution to its defeat. Not so. In spite of the enormous resources devoted to the bombing campaign and massive losses suffered in its execution (the Eighth Air Force alone suffered more than 26,000 deaths during the war), German civilian morale held until the end of the war while German war production actually peaked in the summer of 1944. As Richard Overy conclusively established in The Bombing War: Europe 1939-1945, it was a costly, brutal failure.

A fourth myth is that the Normandy landings were a turning point of the war (as President Barack Obama and othershave claimed). Untrue. Had there been no landings, the Red Army would have defeated Germany all by itself some time in 1946. The landings were necessary to prevent that outcome, but by June 1944 Germany was no longer able to avoid total defeat. Opening the Western front merely accelerated the process.

Lastly is the myth that Japan was finally forced to surrender because the U.S. used nuclear weapons against Hiroshima and Nagasaki. In reality Tokyo’s decision to accept the Potsdam Declaration was made primarily because the Soviet Union declared war on Japan on August 8, rapidly invaded Manchuria and Sakhalin, and made a Soviet occupation of the Japanese home islands a distinct possibility. To the Japanese elite, the prospect of an American occupation was a far lesser evil.

As the Second World War fades from living memory, it is both necessary and possible to correct misconceptions which still circulate years after the end of the bloodiest conflict in human history. The truth exists; only myths need to be invented.