America is Not an ‘Idea’ 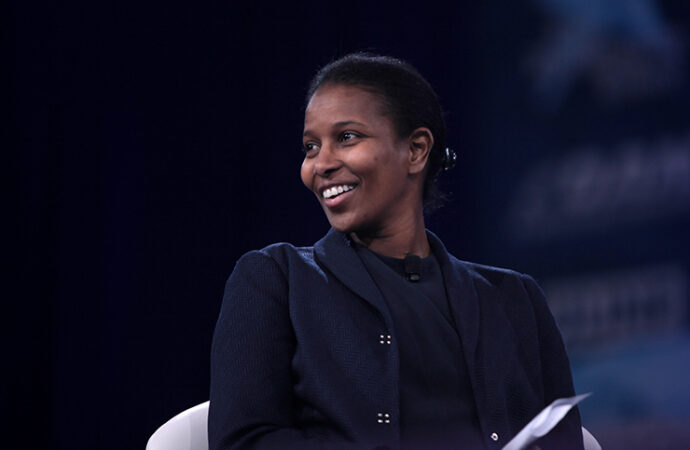 A Somalian feminist and well-known critic of Islamic patriarchy, Ayaan Hirsi Ali, expressed the following critique of Black Lives Matter in an interview with the Hoover Institution last summer:

What we are seeing now is this mishmash of people who call themselves Black Lives Matter have found the hook. They found a way of going about the business of destroying what we stand for, the ideals, you know, the idea of America, by constantly harping on the things we did wrong, which we all admit: the slavery, the segregation…. Our human frailties have been well documented in the past, and if you just grab on any one of the most outrageous, of course—the slave trade—and then you say, ‘Well, here we now have a reason to destroy everything American stands for,’—and this is what those people are saying—then I think it is the time now for most of us to stand up and say, ‘No, here’s what we value, this is who we are.’”

These statements issue from a conservative media celebrity and are intended to convey her disapproval of Black Lives Matter. Yet in spite of this well-meaning critique, one wonders if Hirsi Ali realizes that she is subtly accepting and conforming to the progressive narrative herself.

The “human frailties” of Americans, which Hirsi Ali implies are a thing of the past, is the first subject one might ask her about. One might well wonder at what point the U.S. ceased to exhibit its “human frailties,” Was it 10 years ago, when gay marriage was introduced? Or maybe it was a few weeks ago when our government declared genders to be totally interchangeable, depending on the mood of the person changing his or her sexual identity? And why are members of BLM wrong to believe that the U.S. still suffers from outrageous moral failings? If we assume (which I don’t) that George Floyd was the victim of a “horrific police killing,” perhaps those failings that Hirsi Ali sees as having been antiseptically removed do not belong entirely to the past. This certainly seems to be the position held by BLM protestors.

These are questions worth posing to “conservatives” who tell us how wretchedly prejudiced the past was despite our dedication to the proposition in the Declaration of Independence about all men being created equal and being endowed with certain inalienable rights. On one hand, many believe this equality has not been fully implemented. On the other hand, conservative media stars consider the present to be far better because we have finally dealt with their special grievances and concerns. This seems to be speaking out of both sides of the mouth. How then can they condemn as wrong those on the left who view the past negatively, but also insist that the present suffers from some of the same overshadowing defects? Hirsi Ali seems to be traveling on the same train of progress as BLM, but she is just getting off at an earlier stop than they are.

I readily admit that slavery was an institution that we needed like a hole in the head, but I don’t go around brooding over its past existence. Instead, it’s helpful to look at it in its historical context, namely, that slavery was brought to these shores at a time when the practice existed on most of the globe. Furthermore, it was practiced less brutally in this country than anywhere else, certainly less so than in Africa, from whence most of our slaves came after being purchased from local black slave traders.

Segregation was also an unjust arrangement, and I don’t regret seeing that go either. But what has taken its place is infinitely more frightening: the systematic degradation of white Americans, a process that white elites have ruthlessly advanced while inciting blacks against other white Americans. We have therefore exchanged one set of social problems for another far graver one that may be beyond our capacity to fix. Moreover, looking at the social and living conditions of American urban blacks galvanized by their resentment of whites and the inflammatory rhetoric of race-hustling politicians, I’m not sure I see all that much improvement since the bad old days. The situation looks rather grim to me, but then, nobody pays me to provide happy talk.

Finally, what’s this stuff that Hirsi Ali is feeding us about “the American idea”? She must have been hanging around the neoconservatives for too long. Countries are not “ideas,” but places where citizens or subjects live. Ideas are thoughts, not the experience of intergenerational communities and their participants. History textbooks have been pouring off the presses in recent years that present the U.S. as an “idea” or an “experiment.” When I went to school in the 1950s I was still living in a settled country with widely shared cultural beliefs. I don’t recall either my contemporaries or my parents referring to this land as either an idea or an experiment. But then they didn’t work for the Hoover Institution.