Trump Was No Reagan? 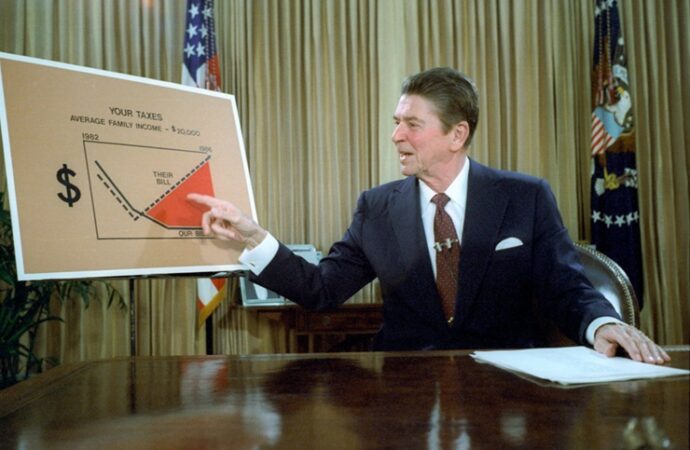 National Review has found yet another reason to hate Trump, whom it has attacked relentlessly for over four years. It seems that among his multiple shortcomings, according to Frank Lavin, a supporter of Republican Voters Against Trump in 2020, Donald Trump was not the Gipper. In fact, he caused the Republican Party to deviate grievously from Reagan’s policies; and so it now behooves us to save the GOP by returning to the proven “conservative” teachings of the president whose approval ratings approached 70 percent shortly after leaving office.

Lavin offers a study in contrast between the Gipper and Trump. In most ways (except in his tax-slashing and deregulation policies), Trump dragged the GOP away from the firm foundations that Reagan bequeathed to his followers. For example, Reagan had “values,” while presumably the Donald has none that we can praise. While Reagan stressed cooperation with the opposite party, Trump was always at war with the Dems. Or as Lavin tells it: “Reagan occasionally found support from Speaker Tip O’Neill. Trump ended up with nothing from Speaker Pelosi.” The contrast continues with Lavin noting: “Reagan set the stage for NAFTA with his call for a ‘North American Accord.’ Trump sided with Bernie Sanders in withdrawing from the Trans-Pacific Partnership.”

In another National Review piece, this time by Alexander William Salter, I admit to being bewildered by this passage: “It’s true that some of the Trump administration’s policies, notably on immigration and international trade, were deviations from conservative orthodoxy, but these were hardly successes.” Was the “conservative orthodoxy” to which we should be returning the absence of border walls? And how was Trump unsuccessful if he stopped the flow of illegals into the U.S., even in the face of massive opposition from the Democrats and from members of his own party?

Was Reagan’s amnesty in 1986 something that Trump should have imitated? I can’t imagine why. The only beneficiaries were the corporate interests that gained cheap labor, and the public sector that issued welfare checks to unemployed Americans. That amnesty did nothing to relieve the continuing problem of illegal immigration, and Reagan later spoke of it as “the biggest regret” of his life.

Returning to Lavin’s piece, it’s important to realize that he ignores a changing historical context. In the 1980s, the Democratic Party of Tip O’Neill bore little resemblance to the party that Trump had to confront as his relentless enemy. Back then Democrats were still a party of blue-collar workers (a class that Trump tried to bring into his populist movement). Tip O’Neill was an Irish Catholic ward-heeler from Boston, who represented a working-class base; Nancy Pelosi by contrast speaks for culturally radical San Franciscans in a transformed Democratic Party, which today features LGBTQ demands, anti-white hysteria, Green New Deals, and which fights the gender identity war. Why would anyone think that Trump would not have gotten along with Tip as well as Ronnie did; or that Reagan would have enjoyed a better relationship with the present Democratic Party than Trump has? We are speaking about different forces of opposition to the GOP in two different eras.

Although Reagan faced critics in the leftist media, as someone who briefly served in his administration, let me assure Mr. Lavin that this sniping was nothing like the nonstop, venomous attacks to which Trump was subjected from the moment he declared his candidacy for the presidency. I have no idea how anyone but an absolute saint would not have exploded in the face of such slander; and it was directed not only against the president but also against his wife and young son. Never in my long life have I seen such a feeding frenzy.

Attacks on Trump as another Hitler and calls for assaults on him became commonplace over the last four years; and I strongly suspect that if Reagan has been forced to deal with such adversaries his approval rating and his temper would both have taken a hit. Reagan left office with a 63 percent approval rating, which by 1989 went up to 68 percent. We might ask what that approval rating would have been if the media threw dirt at him incessantly and if his congressional opponents incited riots against him throughout his presidency. Please note these attacks occurred not just because the Donald was intemperate in his language. The Left wanted power, and it was necessary to destroy Trump’s presidency to achieve it.

Finally, I would note that, unlike Reagan, Trump tried to be a transformative president who took his own party kicking and screaming into the populist form that he gave it. Although an honest, dedicated leader, Reagan transformed nothing. He also ended up turning foreign policy and much else over to the neoconservatives, who hang around like the political equivalent of the COVID-19 pandemic.