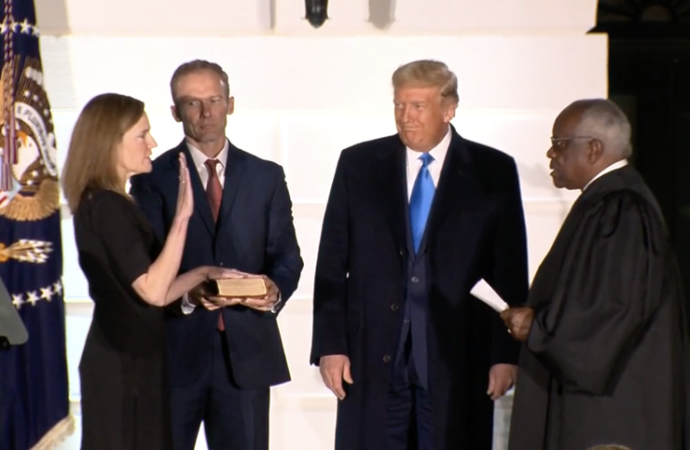 “There is a tendency in our profession,” Judge Amy Coney Barrett declared at the outset of her Senate confirmation hearing, “to treat the practice of law as all-consuming, while losing sight of everything else.”

But, Barrett added in her Oct. 12 opening statement, “I never let the law define my identity or crowd out the rest of my life.”

There is much to celebrate with Barrett’s successful elevation to the Supreme Court of the United States: her impeccable qualifications, her laudable record, her commitment to the Constitution, and the army of devoted family, friends, and colleagues who supported her.

But above all else, it is Amy Coney Barrett the person whom we celebrate, because everything we’ve learned through this process has only strengthened our conclusion that she will be a superlative justice.

The confirmation process is a grueling examination of a nominee’s life. When President Donald Trump nominated Neil Gorsuch to the high court, Gorsuch said that he regretted putting his family through it.

When it was Barrett’s turn, her opponents distorted her record, launched bad-faith attacks against her religious views, and even attacked her family and her decision to adopt children from Haiti.

For starters, we saw a devoted mother whose family was the first thing she talked about at her confirmation hearing. We saw her compassion as she recounted struggling through the death of George Floyd with her black daughter.

Barrett also showed us how this compassion affects the way she decides cases. In explaining her approach, she said:

I ask myself how would I view the decision if one of my children was the party I was ruling against: Even though I would not like the result, would I understand that the decision was fairly reasoned and grounded in the law?

We saw a role model for women, someone who rose to the top in school and in her career while choosing to have the husband, family, and spiritual life she dreamed of.

Just as Barrett thanked the late Justice Ruth Bader Ginsburg “for the path she marked and the life she led,” so too will future generations thank Barrett for the example she sets.

We also got a glimpse of Amy Coney Barrett the mentor who went out of her way to take care of her students and help them launch impressive careers of their own.

And of course, her intellect was on full display both at the Senate confirmation hearing and in the many examinations of her scholarly work and her judicial opinions (see, for example, these reviews of her work on criminal law, civil rights, the First Amendment, administrative law, immigration law, and federal jurisdiction).

Taken altogether, what we got over these past several weeks was a portrait of a woman who will be an extraordinary justice even though – or perhaps because – she breaks the mold.

Still, her qualifications are above reproach. This is a fact perhaps best proved by the dearth of attacks against those qualifications from Democrats.

Instead, Democrats tried to say that Barrett would not decide cases based on the law, but on some other priority such as her religious views, political views, or perhaps out of loyalty to the president.

But Barrett batted away these attacks, reminding senators and the American people time and time again: “I have never tried in my personal life to impose my choices on [others], and the same is true professionally. I apply the law.”

The Senate voted 52-48 to confirm her Monday night. After taking the ceremonial oath of office not long after, Barrett declared:

The oath that I have solemnly taken tonight means, at its core, that I will do my job without any fear or favor, and that I will do so independently of both the political branches and of my own preferences. I love the Constitution and the democratic republic that it establishes, and I will devote myself to preserving it.

We couldn’t ask for more.