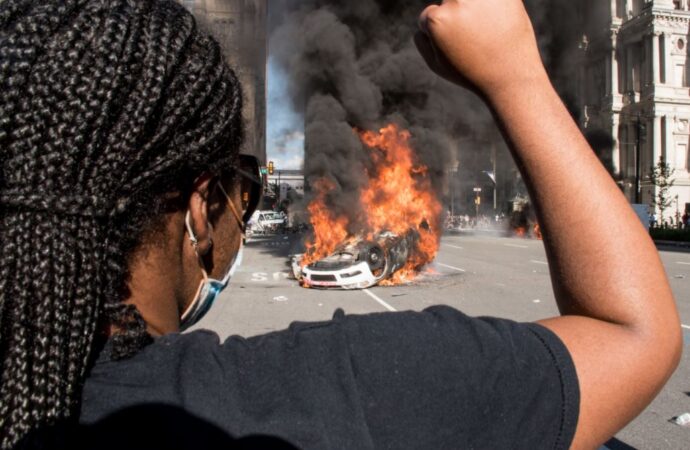 Philadelphia, city of brotherly love, welcome to the ranks of riot-ravaged cities!

Unrest is exploding once again in a major American city, this time following the death of Walter Wallace, a mentally unstable black man killed after advancing on police with a knife. Wallace’s family has pleaded with people to not riot in his name, yet their pleas have fallen on deaf ears. Philadelphia is now dealing with everything from looters on late night Walmart runs to injured police and fires in the streets.

All of this occurs on the threshold of a big election.

To the average person, elections can seem like a lot of hoopla. They’re just a contest to see which of the two similar parties will be on top this time – a vote for one or the other doesn’t really matter. But as I’ve thought about this election, the following thought from Russell Kirk keeps coming to mind:

American politics is not a matter of national party conventions or of presidential elections merely: rather, those conventions and elections and all the other contrivances of American practical politics are means for implementing a body of beliefs about the human condition. Those beliefs are not Christian only, but they are Christian in very large part.

That’s why this election seems so important. No longer are we battling for one party or the other; we are battling to determine the ideology which America will hold in the years ahead.

Up until now, the public lives of people in this nation have been governed by various political parties, while their private lives are governed by their virtues and moral practices which were “Christian in very large part.” When people are properly governed internally, living virtuous, upright lives and making moral decisions that reflect personal responsibility, the fruit of such a lifestyle spills over into the public sphere, making politics and daily life more manageable and bearable.

How are our inner morals doing? If we take our temperature based on our externals, they’re not good.

Take the riots, for example. This latest round started because Walter Wallace waved a knife at police officers. The man was sadly unstable, but could that have been a result of the internal life he lived? The BBC reports that he was a rapper who had “pleaded guilty to robbery, assault and possessing an instrument of crime in 2017 after kicking down a woman’s door and putting a gun to her head.” What happened to him was tragic, but it’s possible he could have avoided such a tragic end if his internal morals had been shaped in the direction of virtuous, upright living.

But this is not just to pick on Wallace. Consider the rioters who went out under his flag. What does looting stores, assaulting citizens and police, and generally causing destruction say about one’s internal morals?

What if we go even further on up the line and look at leadership? What does Wolf’s willingness to turn a blind eye to and lie about “peaceful protests” say about the state of his internal virtues and morals? Unfortunately, he’s not the only leader or public figure to be flat out dishonest.

Sadly, these individuals look and act a lot like the rest of America, and because of that, America is in great danger unless its people can turn these internal matters of the heart and soul around and follow a different path.

The American founders knew this all too well. In a letter to Mercy Otis Warren, John Adams wrote that good government can easily disappear, “its Principles are as easily destroyed, as human Nature is corrupted.” The only way to make good government last is to support it “by pure Religion, or Austere Morals.” He goes on to say:

Public Virtue cannot exist in a Nation without private, and public Virtue is the only Foundation of Republics. There must be a possitive Passion for the public good, the public Interest, Honour, Power, and Glory, established in the Minds of the People, or there can be no Republican Government, nor any real Liberty. And this public Passion must be Superiour to all private Passions.

Yes, we must go to the polls. Yes, we must vote for those leaders whom we believe will best uphold strong morals. But we must also be determined to live our own lives by the morals and virtue which once made this nation great.