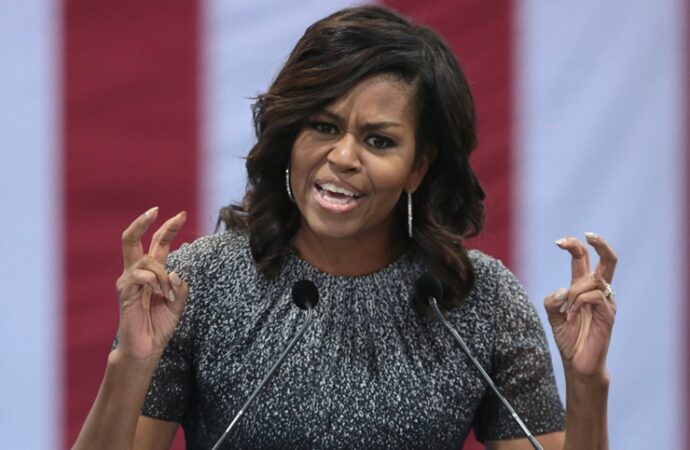 On August 17, Michelle Obama delivered a speech to a remote DNC convention from her palatial home in Martha’s Vineyard. Among other grievances that reached the listeners were these: “Stating the simple fact that a black life matters is still met with derision from the nation’s highest office.” Further: “They see our leaders labelling fellow citizens enemies of the state while emboldening torch-bearing white supremacists.”

It may be unnecessary to explain that “defending a black life” for Mrs. Obama means supporting a terrorist organization that she has emphatically defended. This lady is a big fan of BLM and has refused to say as a public figure, that white lives matter as well. I’m still waiting for evidence that the present Republican administration has given aid and comfort to “torch-bearing white supremacists” or in fact has ever engaged in speech as incendiary as Mrs. Obama’s.

It is not irrelevant to my argument that this speaker, according to Newsweek, is one the most popular women in our country and far more popular than any American political personality. Perhaps there is no other personality whom the media have worked so hard to make into a divinity. Curiously, despite her intermittent claims to represent the downtrodden, Michelle has lived most of her life in comfort while frequenting the world of other rich cultural leftists.

Mrs. Obama is representative of what is primarily white “woke capitalism,” as personified by the CEOs and boards of large corporations like PepsiCo, Citibank, and Goldman Sachs. Woke capitalism also enjoys the effusive favor of those associated with the media and culture industry. The financial sector has poured $155 million into Joe Biden’s campaigns over the years (including $60 million this election cycle alone), and Wall Street investment companies were giddy with joy when Biden picked the most radical leftist female member of the U.S. Senate as his running mate.

Referring to these woke radical millionaires and billionaires as “socialists” and “Marxists” is an almost willful misrepresentation of who they really are. They are out to destroy the nuclear family and hand over cities to BLM, while defunding the police force and cancelling anything meaningfully associated with the Western and Judeo-Christian past. But they are hardly socialists.

Like Michael Bloomberg, they paid to support the easily molded Biden against the quasi-Marxist Bernie Sanders and are even now working steadily to water down anything in the Democratic platform or party that might lead to their own expropriation. What these culturally radical plutocrats want is government assistance in destroying what remains of an inherited Western and identifiably white civilization and its American extension. They would also like to open our borders, which would help sow chaos while providing woke capitalists with an endless supply of cheap labor. But they most certainly seek to avoid any radical change in the economic system that would damage their personal fortunes.

To understand where celebrities like Michelle Obama and Kamala Harris are coming from, it may be useful to note that a complete reversal of Right and Left has taken place in the Western world in the last fifty years. The working class, once linked to the socialist left, is today a fixture of the social-cultural Right and has become the backbone of populist movements. Workers tend to be situated intergenerationally in the same place, are generally resistant to LGBT programs and “cling to guns or religion” as Mrs. Obama’s husband once famously complained while running for president. The elites are based in large cities but are protected with their own security services against the riots they incite and often finance.

The often-systematic efforts by this ruling class to destroy communities and nations while pushing globalist schemes is what social historian Christopher Lasch once dubbed “the revolt of the elites.”  According to Lasch, while those subject to these elites still express traditional loyalties, our financial, political and media leaders follow their narrow personal interests while venting contempt on inherited identities. They readily destroy what no longer matters to them materially, socially, and morally. They also despise any “popular will” which they and their media allies are not able to mold and control. Although Lasch picked the right villains, it is nonetheless unclear if they are indeed engaged in a “revolt.” What may be closer to the truth is that these elites are further consolidating their power by crushing pockets of resistance. And they are unleashing mobs to do their work.

The question remains whether they will be able to control what they are abetting if they can oust Donald Trump in November. Perhaps they are biting off more than they can chew with the ferment and violence they have welcomed. It is one thing for Biden’s staff to go around bailing out violent rioters and putting them back on the streets; or for Michelle Obama to defend the honor of black terrorists from the comfort of Martha’s Vineyard. It is an entirely different matter trying to restore order after woke capitalists and their political friends have sown the present whirlwind.