Are We Becoming a Nation of Gollums? 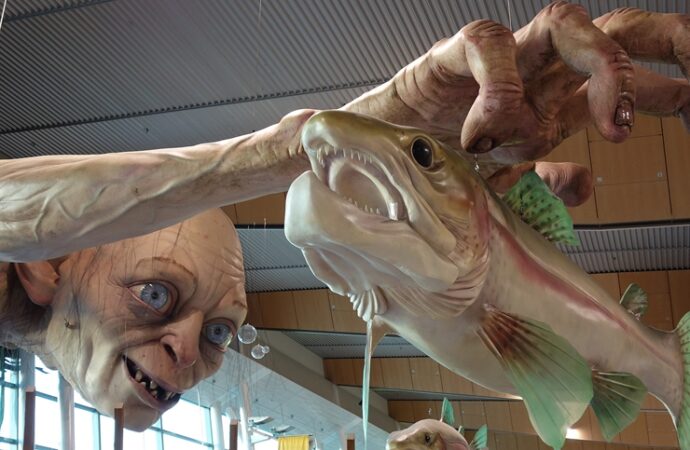 This week, I met a good friend of mine at a local restaurant, the first time we’d got together since before the onset of the pestilence. He is a Presbyterian pastor and a great lover of the works of J.R.R. Tolkien. It was, in fact, Tolkien who had introduced us to each other, in the sense that we first met at a local Tolkien conference a few years ago.

During the course of our conversation, my friend wondered whether Tolkien had something deeper in mind when calling hobbits “halflings,” beyond the literal fact that they are about half the size of men. This set me thinking. Bilbo Baggins is not fully the hobbit he is meant to be at the beginning of The Hobbit. He is a creature of comfort addicted to the creature comforts. He needs a dose of healthy discomfort so that he can grow into a wiser and more virtuous hobbit. He needs an adventure and the suffering and self-sacrifice that an adventure demands. In truth, as we come to discover, Bilbo was suffering from the same dragon sickness as that which afflicted Smaug, only on a smaller scale (pun intended!). Smaug lives under a mountain, squatting on his treasure; Bilbo lives under a hill squatting on his own hobbit-sized treasure trove. They are both possessed by their possessions.

Something similar is happening in The Lord of the Rings, in which the power of the Ring represents something very similar to the dragon sickness. Those who possess the Ring become possessed by it. The Ring promises empowerment but delivers overpowerment, subduing the will of the wearer. The Ring can be seen to symbolize Pride, the one sin to rule them all and in the darkness bind them. If we succumb to its power and its promises, we begin to live the lie with which it overshadows us. We become slaves to our addiction to Pride and its narcissistic self-centredness. We become Pride’s prisoners, unable to escape from the confines of the ego. We cannot sacrifice ourselves for others, which means that we cannot love. In such a state of self-imposed self-isolation, we begin to shrivel into a pathetic shadow of who we are meant to be. We gollumize ourselves.

This is the deeper metaphorical meaning of the word “halfling.” Bilbo and Frodo – and Sam, Merry, and Pippin – all begin as half the hobbits they are meant to be and are called to be. In resisting the power of the Ring, the power of Pride, they grow into their full stature as wise and virtuous hobbits. They are not merely halflings but have attained the wholeness that holiness delivers. Gollum, on the other hand, is overpowered by the “empowerment” that the Ring of Pride promises, becoming a slave to his own possessiveness of the thing that is possessing him. He has also ceased to be the halfling that he once was by becoming less than a halfling. He has shrunk into a shriveled wreck of the hobbit that he once was and has become a demonic parody of the whole hobbit he had refused to become.

As Tolkien was at pains to remind us, there is more to his stories than meets the eye on the literal level. There is what he called the “applicability” of the story to the world beyond the story, including its applicability to the story in which we are all currently living, the story which we call history. Like the hobbits in Tolkien’s stories, we are also “halflings” in the metaphorical meaning of the word. We are only half the men we are meant to be and are called to be. Jesus Christ is the perfect Man. He is truly whole. The more we seek to become like Him, the more whole we will become and the less like halflings. We do this by doing what Christ commands of us. We take up our cross and follow Him, accepting the self-sacrifice that the perilous adventure of life demands, and resisting, through His grace, the power of Pride which seeks to enslave us.

And here’s the paradox. Although we are halflings, we cannot remain halflings. We must either grow towards the wholeness of holiness or we must shrivel into the wreckage that Pride will make of our lives. Doing nothing is the sin of omission which leads to decay. We can either be Ring-bearers or Ring-wearers. We can either take up our cross or we can crucify ourselves.

As we watch our culture succumb to the power of Pride, we are witnessing the gollumizing of our brothers and sisters. Demanding the right to self-destructive addiction, they are shriveling into pathetic wrecks of the people they are meant to be, while simultaneously making a wreckage of the society in which they are living the wreckage of their lives. Paradoxically, their only hope is to be found in the enemies whom they refuse to love. It is those who are striving to become more than halflings who are the only hope for those who have become less than halflings. As the gollumized souls are killing themselves with Pride, humble souls must lay down their own lives for their gollumized friends. As Bilbo, Frodo, and Sam learned to love and pity Gollum, and as Christ laid down His life for his friends who were determined to be His enemies, so must we do likewise.

The only antidote to the poison of Pride is the healing power of humility. The only escape from the hell of hatred is heavenly love.