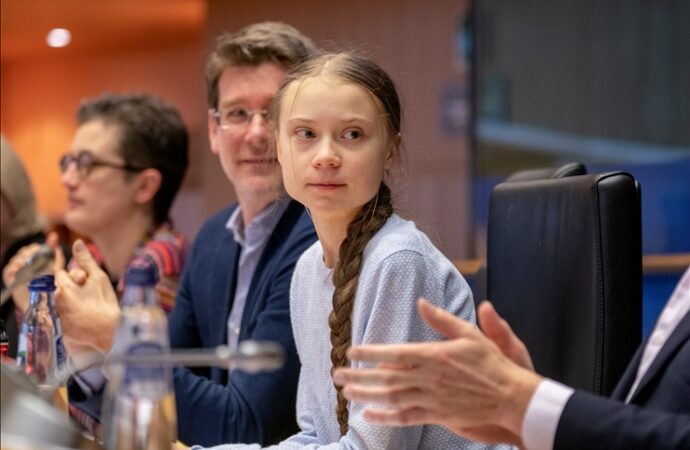 The relentless rise to international fame for this teenager – becoming Time Magazine’s Person of the Year in 2019 – was cut short only by the corona pandemic. Media teams followed her through lockdown, where she eagerly expressed her love for learning and repeated her frequent message of listening to the learned.

Now, however, she’s back, crushing the audience records of the Radio Sweden show “Summer in P1.” This 60-year-old tradition consists of a public figure given free range for 90 minutes to tell the story of their lives and choose the appropriate music that accompanies it. Monologues by these hosts, often musicians, politicians, business leaders or cultural personalities of one kind of another, are often deeply personal. Once a day between June 20 and August 16, the host of the day tells us about their great adventures and emotional journeys.

When Greta Thunberg became internationally renowned for her climate activism last year, it was only natural that Radio Sweden – with the same biases and skewed climate emphasis that Americans may recognize from NPR or the pages of The New York Times – would jump at the chance of hosting Greta. Starting off this year’s round of summer hosts, her show broke all previous records: over a million Swedes, a tenth of the population, listened to her show, and the BBC will broadcast the English version on July 11.

The format is no stranger to difficult topics, both politically and personally. Usually, the themes are biographical and very emotional: celebrities have been known to unearth secrets and talk about the most intimate of feelings. To this day, the lugubrious words of Kristian Gidlund, the drummer in the band Sugarplum Fairy, still bring me to tears. Having been diagnosed with an incurable cancer in his twenties, Gidlund hosted the show in June 2013, just a few months before he died. Most memorably, he read a letter to the beloved child he will never have, imagining his or her life and Gidlund’s journey as a parent.

Greta’s talk is less grim but equally powerful – and one of the better ones she’s given. As a fellow Swede, I’ve always admired her devotion and seeming aura of calmness and factfulness. Throughout, her programme is delivered in a calm voice, balanced and sane, even though the topic she addresses is huge and cataclysmic. Remarkably, with all the world’s attention over the last few years, she has avoided delusions of grandeur and resisted having her self-image distorted.

Or at least so she says. I distinctly recall her World Economic Forum statement, where she said “Our house is on fire,” and where climate change was “the greatest and most complex challenge that Homo Sapiens have ever faced.” When she ushered world leaders to panic, she wasn’t exactly balanced and calm.

In this longer-form talk, she dismissed most of the interactions she has had with world politicians as futile virtue-signaling. The listener can clearly detect Greta’s detest for people talking the talk but not walking the walk. Bureaucrats and journalists are eager to snap selfies with the face of climate activism, but take almost no actions in their ostensible support of said climate activism. Hashtags and Instagram pictures won’t do, Greta repeatedly points out, her voice full of frustration and discontent.

She recounts her much-publicized United Nations speech, from which everyone mistakenly took away only “How dare you,” when her intended message was: “We don’t accept these odds” and “Listen to the scientists!” She tells of meeting after meeting where people, politicians as well as strangers on the subway, wish to congratulate her on her speech and celebrate her achievements: “What for?” she exclaims, noticeably surprised and annoyed, “Another meeting is over; empty words are all that remain.”

And in those few words, she captured the essence of politics.

Repeatedly during her show, she asks us, commonsensically, to listen to the science. The problem, she explicitly admits, is of course which science. In contrast to what Greta seems to believe, environmentalism is not a question of climate scientists vs climate deniers – that ship, as she persuasively points out, has sailed. Unfortunately, she overlooks the more difficult battle between the sciences and how the object of their inquiry interacts with human societies. Economy is not ecology.

While the full details are fuzzy, the impact that humans have on our world is pretty clear: our carbon-using activities leading to glaciers melting, storms getting worse and unpredictable, harvests and agricultural cycles being altered. That’s not controversial and, to my knowledge, in this Greta is mostly correct.

The science about how best to safeguard human flourishing, however, is controversial and a topic that the teenage activist rarely addresses. How climate change affects human societies and how best to protect us against a slightly changed nature is far from clear. According to the climate models of William Nordhaus, the co-recipient of the 2018 Nobel Prize in economics, the optimal rise in global mean temperature is around 3.5 degrees Celsius – much higher than the 1.5-degree target espoused by the UN and echoed by Greta. Perhaps Nordhaus is wrong, but he’s hardly a climate change denier, and he has at least thought long and hard about the aggregate pros and cons of a warmer planet.

Many of the topics that Ms. Thunberg raises are real ecological dangers – she’s serious and honest enough not to make stuff up. But they’re much less troublesome than she thinks, and many available solutions are vehemently detested by her fellow climate activists: nuclear power, geoengineering, economic growth, capitalist innovation.

Indeed, adopting policies that severely cut back humanity’s use of fossil fuels such that the 1.5-degree target would be achievable, are likely to make humanity much poorer than not doing anything at all. As we’ve learned recently from the corona debacle, cures are often much worse than the disease they intend to fix.

In contrast to the cataclysmic nature of Greta’s talk, humans have never been more well-protected from the awesome power of mother nature. Damages from U.S. hurricanes, adjusted for population and prices, have shown no upward trend in the last 120 years. Damages from wildfires, so vividly in the news last year, have similarly not been made worse by anthropogenic climate change.

Economic losses due to weather events, composed of both naturally-occurring events and any human-made worsening through emissions, have actually been decreasing over the last thirty years. Similarly, the number of people who die from climate events (floods, storms, droughts etc) has been rapidly falling for a hundred years. While human-made climate change seems to have altered our environment roughly in the ways that Greta outlines, we have at the same time gotten much, much better at protecting ourselves from those extreme events. In no small feat thanks to the fossil fuels that activists detest so much, we have been able to tame nature’s most devastating harms.

This is the science Greta forgets about.

My favorite paragraph from an IPCC report that Greta frequently cites and a sister report to the one she famously delivered as testimony to the U.S. Congress reads:

“For most economic sectors, the impact of climate change will be small relative to the impacts of other drivers (medium evidence, high agreement). Changes in population, age, income, technology, relative prices, lifestyle, regulation, governance, and many other aspects of socioeconomic development will have an impact on the supply and demand of economic goods and services that is large relative to the impact of climate change.” (emphasis added)

Perhaps Greta’s message for politicians to listen to the scientists and take real action has hit home. In one sense, they are already well on the way to following her advice. They read chapter 10 of IPCC’s AR5 report, where they learned that climate change is important – but that other socioeconomic developments matter much more.