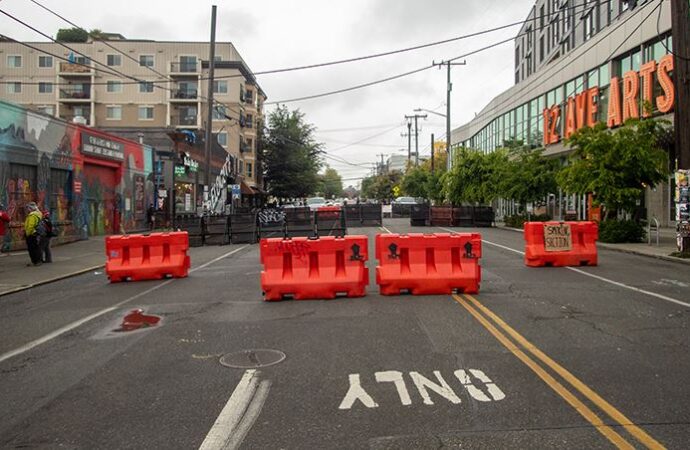 First came the riots and the protests. Then came the surrender and disbanding of police forces. All in response to the death of George Floyd.

What started in Minneapolis has now spread nationwide. No longer is Minneapolis alone in ordering police forces to flee their home turf, now a police precinct in Seattle has also been abandoned. In its place, writes a reporter at MYNorthwest, is the “Seattle People Department,” a new fixture in the “Capitol Hill Autonomous Zone,” established by protesters.

From all reports, this new autonomous zone is a scene of nirvana. People are happy and at rest. They are supplied with free food and health care. They join together at night to watch movies.

They are also striving for change, demanding that the police force be disbanded, protests be decriminalized, free college for everyone in the state, and “anti-bias training become a legal requirement” for those working in media, education, and healthcare. Utopia has come to Seattle, proving that yes, everything is possible with peace and love.

Yet in the midst of the self-congratulations that appear to be taking place, I find the words of Edmund Burke very relevant.

Writing about his Reflections on the Revolution in France, Burke commends the principle of liberty, but recommends reserving judgment until the full effects of a particular liberty movement are known:

When I see the spirit of liberty in action, I see a strong principle at work; and this, for a while, is all I can possibly know of it. The wild gas, the fixed air, is plainly broke loose: but we ought to suspend our judgment until the first effervescence is a little subsided, till the liquor is cleared, and until we see something deeper than the agitation of a troubled and frothy surface. I must be tolerably sure, before I venture publicly to congratulate men upon a blessing, that they have really received one. Flattery corrupts both the receiver and the giver; and adulation is not of more service to the people than to kings.

This is the stage we are in right now. Excitement is still running high and crowds are agitated. They’ve been united in a cause and achieved some success, so of course they view everything as peace and love.

But what happens as time goes on? If they are now an autonomous community, how will they choose to govern? Who will lay down the laws? Will everybody currently in that community agree with new laws as they are created?

Burke recognized a similar problem with the Revolution in France. He noted that a new regime must prove itself first in matters of basic governance before once could say that the new strain of liberty was worthy of applause:

I should therefore suspend my congratulations on the new liberty of France, until I was informed how it had been combined with government, with public force, with the discipline and obedience of armies, with the collection of an effective and well-distributed revenue, with morality and religion, with solidity and property, with peace and order, with civil and social manners. All these (in their way) are good things, too; and without them, liberty is not a benefit whilst it lasts, and is not likely to continue long. The effect of liberty to individuals is, that they may do what they please: we ought to see what it will please them to do, before we risk congratulations, which may be soon turned into complaints. [Emphasis added.]

Prudence would dictate this in the case of separate, insulated, private men. But liberty, when men act in bodies, is power. Considerate people, before they declare themselves, will observe the use which is made of power,—and particularly of so trying a thing as new power in new persons, of whose principles, tempers, and dispositions they have little or no experience, and in situations where those who appear the most stirring in the scene may possibly not be the real movers.

In other words, the true test of a liberty – or autonomy – movement is how its citizens govern themselves and those under them. Do they establish structures which promote civility, order, morality, and a general system of good governance which will further the well-being of the people? Or have they simply shaken off the bands of their “oppressors,” in essence, merely being seekers of self-indulgent libertinism?

As Burke says, time will tell… all too well.