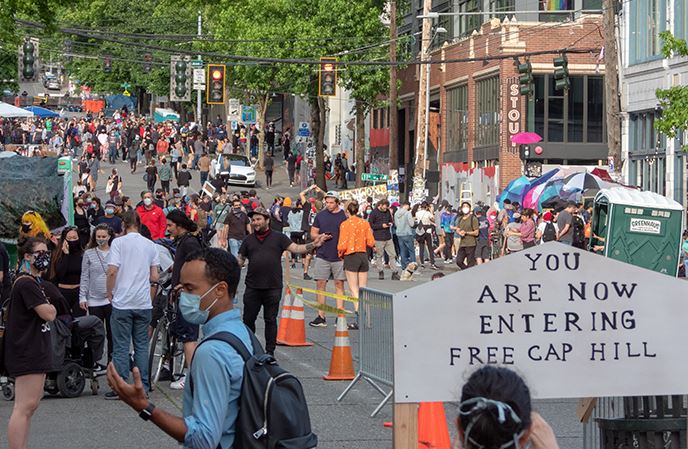 “Maybe we’ll wake up and this will all be a bad dream.”

I think that’s the sentiment of many these days. Our world seemingly changed overnight and many of us just long to go back to the piddly struggle of getting up every day to drive to work.

The trouble is, it’s unlikely we’re going back, and an old interview circulating on the internet tells us why. The interview features Yuri Bezmenov, a former communist and KGB public relations man, interviewed in 1984 by G. Edward Griffin. The abridged interview in the clip below focuses on “ideological subversion,” which Bezmenov describes in the following way:

To change the perception of reality of every American to such an extent that despite of the abundance of information, no one is able to come to sensible conclusions in the interest of defending themselves, their families, their community, and their country. It’s a great brainwashing process which goes very slow, and its divided in four basic stages.

The first of these stages is what Bezmenov calls “demoralization.” This stage is the longest and it lays the groundwork for the other three, slowly undermining the ideology of a nation through its education system.

Bezmenov notes that “most of it is done by Americans to Americans, thanks to lack of moral standards.” Bezmenov didn’t live long enough to hear the term “cancel culture,” where neighbors, friends, and celebrities rise up against others for expressing opinions that were acceptable only a few years ago, but which are now politically incorrect, but he seems to have understood its meaning perfectly.

This stage is also characterized by a rejection of truth, as anyone who has tried using facts and figures in a debate recently understands firsthand:

Exposure to true information does not matter anymore. A person who is demoralized is unable to assess true information, the facts tell nothing to him. Even if I shower him with information, with authentic proof, with documents, with pictures.

Unfortunately, Bezmenov implies, reality will register all too late, when those who brushed facts aside are subjected to the heavy hand of a military state.

The second stage, destabilization, follows demoralization, and lasts from two to five years. Bezmenov explains that such destabilization occurs in the “economy, foreign relations, [and] defense systems” of a country. One wonders if America has been in this stage for the past few years, because the third stage sounds exactly like our current situation: crisis.

The crisis is the shortest of all, for Bezmenov believes “it may take only up to six weeks to bring a country to the verge of crisis….” By those standards, we’ve done well, at least if you count the three months of COVID lockdown. However, if we set that aside and start counting from the time of George Floyd’s death, then we’re about halfway through this stage, which often brings “a violent change of power, structure, and economy.”

When this is over, will life get back to normal? Perhaps, at least in the sense of a new normal, often characterized by the propaganda of a “Big Brother government.” “This is what will happen in United States,” notes Bezmenov, “if you allow all the schmucks to bring the country to crisis.”

But all does not end well for those bringing the country to crisis, either.

Your leftists, in United States, all these professors and all these beautiful civil rights defenders, they are instrumental in the process of the subversion, only to destabilize the nation. When the job is completed, they’re not needed anymore. They know too much.

Bezmenov concludes with these dire words: “The time bomb is ticking with every second. The disaster is coming closer and closer. Unlike myself you will have nowhere to defect to.”

The hour is short, dear reader, and you must decide. Take it from Bezmenov, who endured such a scenario in his own life. Will you go along with the mob, or will you continue to fight for truth no matter the cost?