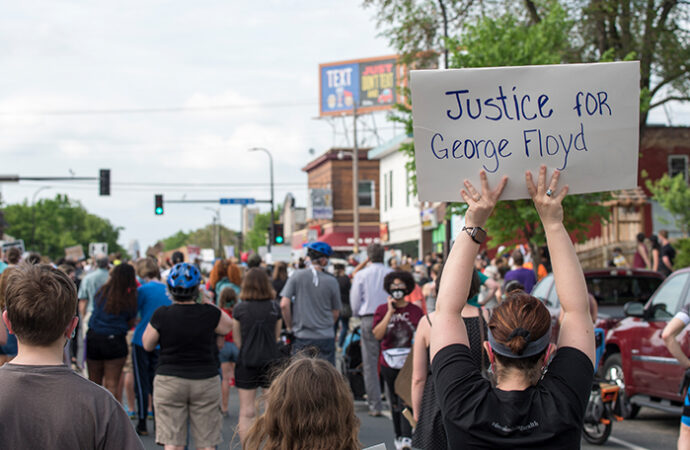 The tragic death of George Floyd at the hands of a Minneapolis police officer has circulated all over social media in the past two days. It is exceptionally difficult to watch.

The facts leading up to what the video captures have been recounted by numerous media outlets.

Minneapolis police officers arrived Monday evening to arrest Floyd, 46, on suspicion that he had committed forgery. Police said the officers ordered him out of his car, but he physically resisted them.

By the time a bystander begins to record the video, Floyd is handcuffed, face down on the asphalt, and Officer Derek Chauvin is driving a knee into Floyd’s neck with what often appears to be his full body weight.

For roughly a minute, Floyd shouts that he can’t breathe and that the officer is hurting him. Then, Floyd is suddenly silent. His body goes limp. He clearly has lost consciousness and it appears he may no longer be breathing.

But Chauvin continues using his knee to apply pressure to Floyd’s neck for several more minutes – minutes that feel like an eternity when watching them tick by for a handcuffed, unconscious man.

Other officers on the scene do not attempt to assist either Chauvin or the distressed Floyd, but instead try to block bystanders’ view.

Chauvin calls for medical assistance, but still shoves his knee onto Floyd’s neck.

Floyd eventually was taken into an ambulance. He was pronounced dead just “a short time later,” according to news reports.

It is, of course, possible that the officer’s knee had nothing to do with Floyd’s loss of consciousness and eventual death. Perhaps a coroner’s report will prove beyond any reasonable doubt that Floyd had been poisoned, suffered from a congenital defect, or otherwise would have died at that exact moment regardless of the officer’s actions.

But, absent such a report, the video tells a damning story of a causal relationship between Chauvin’s knee on Floyd’s neck, Floyd’s loss of consciousness, and Floyd’s death.

The Minneapolis Police Department fired Chauvin and three other officers Tuesday because of their actions the day before. This was, without a doubt, the correct call.

The only remaining question, legally speaking, is whether Chauvin will face criminal charges, as Floyd’s family has demanded.

He should. Justice demands it, even if Floyd’s family had not.

Minnesota law clearly lays out the situations in which a peace officer may use certain levels of force, including deadly force.

Ample evidence shows that this officer used deadly force in a context that fell outside the scope of any lawful authority he possessed, and that his actions therefore were the equivalent of second-degree murder under Minnesota law. At the very least, this is a question that should be brought before a jury.

Let’s break this down a bit further.

Officer’s Use of Deadly Force

At first glance, this would seem to be straightforward. If George Floyd died because of the force applied by Officer Derek Chauvin, the officer’s action quite literally was “deadly” force.

Minnesota law, however, is more technical than this.

Under the relevant statute, deadly force in this instance would occur only if Chauvin intended or should have reasonably known that the pressure from his knee would be substantially likely to cause Floyd serious injury or death.

The Minneapolis Police Department’s internal use-of-force guidelines classify certain types of “neck restraint” as nonlethal force. Chauvin likely didn’t use this neck restraint with the “purpose” of causing death or great bodily harm. And because of his training, it initially may have been reasonable for him to believe the action did not create a substantial risk for Floyd.

However, Minneapolis Mayor Jacob Frey has stated that Chauvin’s actions did not reflect a department-approved neck restraint. Many other use-of-force experts also have criticized the officer’s technique.

Moreover, the Minnesota Court of Appeals has ruled that body parts – such as hands or knees – can be used to apply “deadly force” in certain circumstances, such as when they are used to choke someone.

Most importantly, whatever argument Chauvin may have first had for using a less-than-ideal technique on Floyd, whatever reason he initially may have had to believe Floyd wasn’t really in distress as he called out, “I can’t breathe,” it all went out the window the moment Floyd went limp and clearly lost consciousness.

At this point, a reasonable officer has to recognize that the neck restraint is, in fact, causing serious injury. He has to think to himself, “Maybe I should stop crushing this man’s neck with my knee.”

The moment in which a reasonable officer would have understood a neck restraint was causing serious injury, that neck restraint became deadly force that must be justified under the law.

It’s hard to see how, at the moment the use of the knee restraint turned into the use of deadly force, any of the justifications outlined by the relevant statute applied.

Floyd had been arrested for a nonviolent offense and was unarmed. And whatever resistance Floyd may have initially offered, he was handcuffed and unconscious for several minutes while Chauvin continued to apply pressure to Floyd’s neck with his knee.

A man who is handcuffed and unconscious almost certainly is not a threat of causing great bodily harm, either to the officer or to the public. He no longer is attempting to flee or commit a felony. He is, for all intents and purposes, completely subdued.

Deadly force is no longer justified, assuming it ever was.

This Was Second-Degree Murder

What, then, is the appropriate criminal charge to take before a jury?

Minnesota, like most other states, requires an element of intent for first-degree murder. It likely would be a stretch to suggest that Chauvin intended to cause Floyd’s death.

Similarly, third-degree murder is likely off the table. Even though it might seem applicable as the unintentional killing of another person “by perpetrating an act eminently dangerous to others and evincing a depraved mind, without regard to human life,” the Minnesota Supreme Court has clarified that third-degree murder “cannot occur where the defendant’s actions were focused on a specific person.”

We are left, then, with second-degree murder, which appears to be an appropriate charge. In Minnesota, this offense occurs when a person unintentionally causes a death while committing a felony offense.

Arguably, Chauvin committed the felony offense of assault, as his use of force was not authorized or justified under state law. Floyd died as a result of this unjustified assault, even if the officer did not intend to kill him.

Keep in mind, too, that Chauvin also could face criminal charges under federal law for civil rights violations, and the FBI is conducting its own investigation alongside state authorities.

Because Floyd ultimately died, a conviction under these federal statutes would carry equally significant penalties as a conviction for second-degree murder under state law.

Law enforcement officers have incredibly difficult jobs and generally deserve the benefit of the doubt. Society often fails to fully appreciate the challenges and complexities faced by police officers on a daily basis. Even the most mundane calls can turn deadly in, quite literally, the blink of an eye.

We owe these public servants more than jumping to quick conclusions or second-guessing their every move.

But sometimes, an officer’s actions are so grotesque, cruel, or mind-boggling that the benefit of the doubt no longer can be extended. Sometimes, it isn’t a matter of “waiting for more information,” because no additional information ever could justify what the public has witnessed.

The death of George Floyd was simply injustice.

And we must not tolerate it.