Gun Control: We’re Avoiding It During COVID-19 So Far 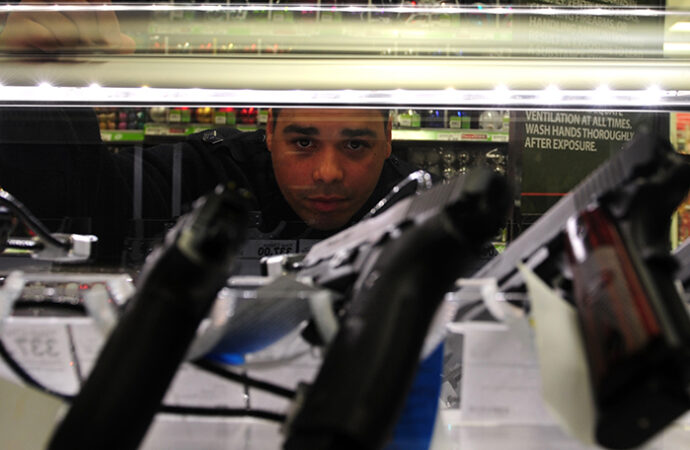 If history has taught us anything, it’s that a crisis is the lifeblood of state growth. The coronavirus saga offers a treasure trove of power grabs that elected officials are seeking to ram through while Americans must make significant readjustments in their daily lives due to state-imposed shutdowns around the nation. Some of the attempts to transgress on individual rights extend to other activities that have no relation to public health whatsoever. Take, for example, the right to bear arms.

At the federal level, politicians have already sneakily introduced the “Gun Violence Prevention and Community Safety Act of 2020,” a bill that would enact several gun control measures such as federal licensing for guns and ammunition, mandatory universal background checks, a prohibition on so-called “assault weapons,” and a ban on normal-capacity magazines.

In other words, the typical shopping list of civilian disarmament schemes that many federal busybodies desire. Due to the divided makeup of the current Congress, this bill will likely die. However, its introduction is indicative of the opportunistic nature of politicians during times of emergency—real or fabricated.

None of these political machinations are novel when we reflect on American history. It’s often forgotten that most of America’s foundational gun control legislation was enacted during the overlapping era of the Great Depression and Prohibition. This period was a maelstrom of social disorder—organized crime ran loose and the economy was in shambles.

What history books gloss over is how both of those unpleasant incidents during the 1930s were the result of bad public policy. Alcohol prohibition incentivized organized crime, while credit expansion by the Federal Reserve led to the infamous stock market crash of 1929. Subsequent economic interventions by the Hoover and Roosevelt administrations impeded a timely recovery.

To their credit, politicians ended the absurdity of Prohibition by ratifying the Twenty-First Amendment in 1933. Nonetheless, most of the great leaps forward, such as the establishment of the Social Security Act and the National Firearms Act of 1934, have stayed in place. The latter has seen other forms of federal gun legislation built on top of it in an all too predictable manner.

The ratchet effect that Robert Higgs has aptly described, whereby expansions in state power during times of emergency are rarely reversed, has been a mainstay of American politics since the Progressive Era. Considering previous episodes of American history over the last century, the present coronavirus pandemic seems like fertile ground for another instance of the ratchet effect.

Surprisingly, the attempts to use this crisis as a springboard for infringements on the right to bear arms have not been so effective. The federal government has not only shown a surprising degree of restraint, but also declared gun stores “essential” businesses at the end of March. In contrast, various state legislatures and municipalities joyfully lumped gun stores in with other “nonessential” businesses in their shutdown measures. Nothing says “equality” like dishing out equal misery via administrative fiat.

Once the progressive die has been cast, policy becomes a matter of who can outdo the rest in terms of demagoguery. Champaign, Illinois, mayor Deborah Frank Feinen rose to the occasion by banning the sale of alcohol and guns last month. New Orleans mayor LaToya Cantrell followed in her footsteps by banning the sale and transportation of firearms in the city.

At the state level, Governor Gavin Newsom enacted a statewide “stay-at-home” order for California that did not list gun stores as essential businesses. Even middle-of-the-road states such as Pennsylvania initially saw statewide closures of gun stores.

In a rather fortuitous twist of fate, grassroots pressure and the federal government’s reasonable actions were able to compel several states and municipalities to reverse course. Liberty-minded state representatives in Pennsylvania successfully petitioned Governor Tom Wolf to exempt gun retailers from the across-the-board closures, while Wake County, North Carolina, opted to not follow through with its decision to deem gun stores as nonessential.

Although pessimism is often warranted, thanks to the almost predictable nature of government, swelling under any given administration, the current coronavirus pandemic offers another comforting prospect—more Americans becoming armed.

Many new gun owners have rushed to gun retailers to acquire a means of protecting themselves and their loved ones at a time when uncertainty looms on the horizon. In this process, otherwise politically aloof individuals are seeing firsthand how rigid the current gun control system is, especially the federal background check system. The process of buying a gun in America is not as simple as many TV pundits make it out to be. Nonetheless, the National Instant Criminal Background System (NICS) experienced a record number of background checks. Americans still have residual constitutionalist instincts on gun ownership despite the constant fearmongering from media talking heads and years of social engineering at public schools.

Americans are lucky that their the current government has exercised some restraint. But on future occasions they may not be so fortunate. Politics is oftentimes a coin toss: the populace holds its breath, waiting to see how it lands. Eventually the coin will fall on the wrong side, and citizens will be subject to a torrent of state abuse. We must end this dangerous game to avoid the fate of despotism.

Is it too much to ask our leaders to think beyond their terms in office?

The short time horizons of mass democracy incentivize impulsive policymaking. Regular Americans can at least do their part by not giving prospective tyrants any more tools to use should come into power. The safest bet for Americans who value the right to bear arms is to look ahead and take up the challenge of implementing radical decentralization in their own backyards.

The empowerment of local jurisdictions is not only a matter of preserving freedoms, but also of building strong institutions that are ready to block the inevitable usurpations coming from above.

As they say, forewarned is forearmed.