Travel in the Time of Corona 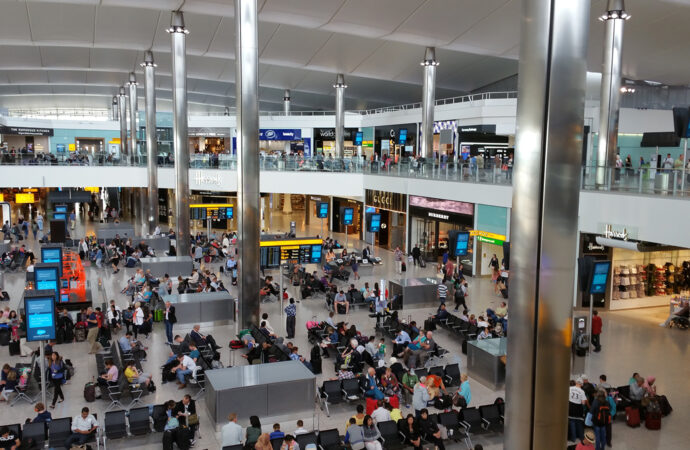 It is Friday morning, March 13th, the first day of President Trump’s ban on most Europeans’ travel to the United States. Belgrade’s Nikola Tesla Airport is notably less busy than usual. The local news station reports the current tally at 9 a.m. Corona infections have reached 130,000 and caused 5,000 deaths in 114 countries thus far. Air Serbia’s Flight 380 to London is only half full.

Roughly a third of my fellow passengers are Americans who will make connections at Heathrow for the flight across the Pond. They decided that London is the optimal staging point for the trip home because Britain has been excluded from Trump’s European travel restrictions. In the next few days there will likely be mayhem at Frankfurt, Paris or Amsterdam, though.

There are surprisingly few face masks and not a pair of latex gloves in sight. Commendable calm, with a touch of grin-and-bear-it stoicism. A law professor from Georgia explains to a fellow traveler that the shutdown will affect countless college seniors who are due to take their finals in the next few weeks. This will delay their graduation dates, affecting job applications and internships. In addition, thousands of postgrads can’t get supporting documentation. The shutdown will wreak havoc on the processing of applications for the fall, not to mention foreign student admissions. Some parents are already making inquiries about prorated refunds of the fees and living costs of their offspring sent home.

Three retired ladies from Chicago decided to cut their three-week European tour short and fly back home, lest they get stuck amidst the anticipated cancellation of hundreds of trans-Atlantic flights in the days to come. The grand finale of their itinerary was supposed to be a week in Italy – Rome, Florence, and Venice – which is of course out of the question now. “Well, we’ll come back next year if we’re up to it,” says one with a laugh. “Unless something happens again,” adds another, “like global warming flooding Saint Mark’s or something….”

As we board, a Serb doctor friend calls to wish me bon voyage. She sounds somber: it’s not a good idea to travel right now, to breathe recycled air for hours on end. (If you absolutely need to travel, here’s a constantly updated list on how the airlines are handling issues regarding COVID-19.) Taking lots of zinc with vitamins C and D is a must. More than the elderly are at risk: Italy’s mortality rate has gone up from two to seven percent, a third of the victims are under 50.

In China the worst may be over, but not in Europe. I ask about Angela Merkel’s warning that one-third of all Germans may get infected, which sounded alarmist to me. “It’s is not an exaggeration,” my friend says. “There is no time to dither between partial containment measures and drastic lockdowns – the Italians hesitated for too long, and we’ve seen the fruits.”

Three hours later, at Heathrow, it’s peace and calm at Terminal 3 where I wait for my flight, but the Americans at the lounge talk of long delays, messy scheduling, and reservation snags in other European airports. Two business types discuss the stock market dip and expect a quick rebound. They believe that the U.S. economy was strong enough before the epidemic to withstand a touch of recession, provided the worst is over in the next month or two. They joke – sort of – that if the Deep Staters wanted to destroy Trump’s reelection chances by unleashing the virus, they should have waited until August.

Is there a silver lining to it all? Even without the deaths from Corona today, or some even more lethal pestilence tomorrow, on current form by the end of this century there will be no “Europeans” as members of ethnic groups that share the same language, culture, history, and ancestors, and inhabit lands associated with their names. At the same time, Europe’s rapidly shrinking populations – of which Italy provides the most drastic example – are indoctrinated into believing, or forced into accepting, that the demographic shift favoring migrant invaders is a blessing that enriches their culturally deprived and morally unsustainable societies.

At the root of the malaise is the notion that countries do not belong to the people who have inhabited them for generations and worked and died for them. A further malevolent fallacy is the dictum that we should not feel a special bond for any particular country, nation, or culture, but transfer our preferences to the whole world, “all Humanity,” equally. But events like this pandemic have a subversive effect on the attempt to transform an increasingly globalized society into a socio-technological system in which all shades of human relations and nuances will be streamlined into manageable routines and procedures.

The community of real, vulnerable and mortal human beings – who for all their money and technology cannot avoid getting sick and needing help and empathy from their fellows – is still there, and it functions when absolutely needed. It is the polar opposite of the “culture” of the artificial world, of post-historical, technological man which seeks to eliminate the Creator.

Epidemics and other existential crises enhance the sense of solidarity among members of real nations and communities, not some abstract “Europeans” but Lombards and Venetians and Tuscans. This is contrary to the beliefs and preferences of the elite class who believe that all countries are but transient, virtual-reality entities.

People who love their lands more than any others, and who put their families and their neighborhoods before all others, are normal people. Those who tell them that their attachments should be global, and that their lands and neighborhoods belong to the whole world, are not. They seek to destroy the uniqueness of home and hearth, the bonds that bind wife and husband, parent and child, community and neighbor, tradition and faith.

Corona may remind the arrogant, secular Westerner, seemingly lost in his many self-fulfilling narcissist pursuits, that he is fragile and mortal after all. Having no faith except the belief in his own uniqueness, he may have a moment of clarity: this equation has too many variables for people like himself to simply manage and resolve. Maybe God will cross his mind, or better still enter his heart – and his recovery, and that of millions of others, will begin. It’s not just a dream.