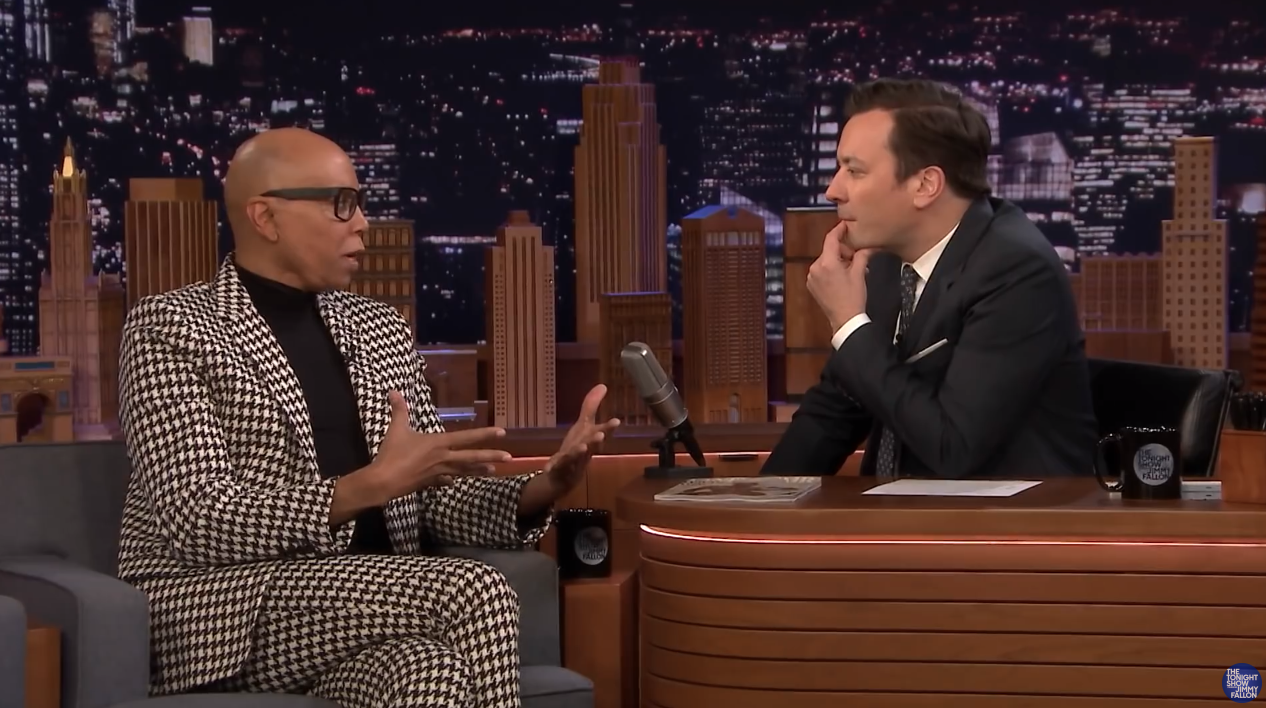 Drag performer RuPaul appeared as a guest on The Tonight Show Starring Jimmy Fallon the other day. In recent years, drag has achieved widespread visibility and acceptance, sashaying triumphantly from underground clubs to TV screens and into elementary school classrooms. Now, it has reached a new milestone, with RuPaul becoming the first drag queen to appear on the cover of Vanity Fair magazine.

“This is the first time a drag queen has ever been put on the cover,” Fallon says, only to be loudly and flamboyantly cut off.

Fallon freezes. Panic flickers in his eyes. His mouth gapes open to stammer something. An apology? Perhaps. We’ll never know.

“I am the Queen of Draaaaag!” RuPaul proclaims, savoring the payoff. “Ah,” Fallon says, visibly relieved though clearly shaken, before turning away from his guest for a moment to recover his composure. You could almost read the words Thank God in the look that momentarily darkens his usually cheery countenance. He manages to laugh. “I’m embarrassed; I’m sorry,” he says. He’s in on the joke now. Crisis averted.

BuzzFeed’s story on the interview carries the headline “Jimmy Fallon Really Thought He Said Something Offensive to RuPaul And His Face Tells It All” with the subhead “His face = planning an apology tweet,” which is an accurate summation in its own way. Fallon did seem genuinely scared that “drag queen” had become a slur overnight and nobody had told him.

If he’d merely been concerned that he might have unintentionally offended his guest, Fallon’s reaction would have been an admirable display of sensitivity. There’s nothing wrong with choosing words carefully to avoid insulting a conversation partner. Asking questions such as “Could you explain that to me?” and “Is that the right term?” when dealing with someone of a different race, creed, lifestyle, or culture doesn’t make you a politically correct wimp. It makes you a decent person.

Maybe Fallon was simply worried that he’d hurt RuPaul’s feelings, but it sure didn’t seem that way, and it’s certainly not how social media interpreted his reaction.

“LMFAOOOOOOO Jimmy Fallon thought he was about to get CANCELED [sic]” one Twitter user wrote, while another tweeted a few hours later that “Jimmy Fallon fully thought his career was cancelled after this interview.”

In the world of liquid modernity, cultural values shift so rapidly that people lose their jobs for making statements that were universally accepted five years ago. Just look at Maya Forstater, a British researcher who lost her job for daring to say that “men cannot change into women.” A judge even ruled that such an opinion is “not worthy of respect in democratic society.” What turned into a joke on Fallon was a harsh reality for Forstater.

Comedian Dave Chappelle put it perfectly when he said, “I don’t think I did anything wrong, but… we’ll see.” Fallon genuinely believed he was going to be ruined because he broke a rule he didn’t even know existed. That’s terrifying, not just to talk show hosts, but to all of us. If anyone can be made guilty, anyone can be punished.

Author and journalist Rod Dreher coined a term for this practice of rapidly imposing new dogmas and destroying anyone who doesn’t immediately adopt them: “soft totalitarianism.”

“I call it ‘soft totalitarianism,’ Dreher writes, “because it’s not going to have gulags, or interrogations… They’ll just cancel you, and you won’t work again. They’ll teach your children to hate you, and to hate themselves. And so forth.”

RuPaul seems to have been jesting in good fun without any insidious intent, but Fallon’s reaction and the glee with which some have greeted it suggest that something darker is at work. His fearful cringing was reminiscent of an abused dog who no longer understands which behaviors lead to beatings. His smile, once recovered, was that of a re-education camp graduate. Like Winston Smith, who by the end of 1984 “loved Big Brother,” he is being conditioned to believe that his only comfort in life and death lies in the bosom of officially sanctioned ideology.