The Five Most Hyperbolic Impeachment Moments 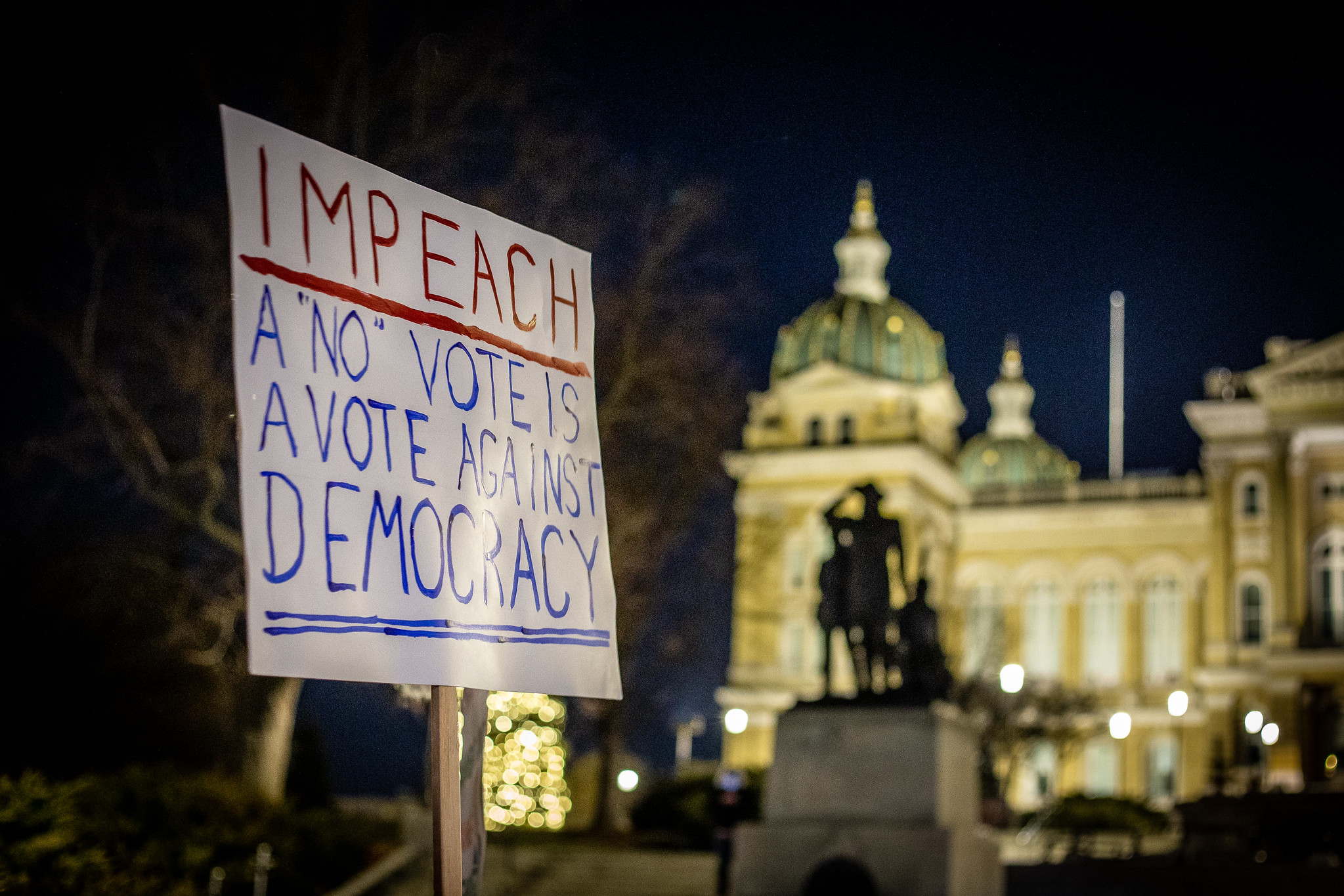 The House impeachment debate and subsequent vote in favor of ousting President Trump Wednesday were historic, Congress wants you to know. Wednesday is of such monumental import,  we will all talk about this in the years to come to our children and our grandchildren. We will know where we were the day Congress voted to impeach Donald Trump, members of Congress intoned.

As the day rolled on, comparisons were made to the Salem witch trials, slavery, suffrage, the civil rights movement, World War II, the trial and crucifixion of Jesus — indeed, it seemed there was no rhetoric too over-the-top.

It’s for the kids…

Rep. Joe Kennedy kicked things off by reading a pretend letter to his kids, explaining that although he doesn’t feel good about it, he had to vote for impeachment because Trump “broke our laws” and “threatened our security.”

“He abused the highest, most sacred office in our land,” Kennedy said in the santimonious tone that would become a feature of Wednesday’s speeches.

.@Repjoekennedy: “Dear Ellie and James, this is a moment that you will read about in your history books. Today, I will vote to impeach the President of the United States and I want you to know why…It does not feel good.”

Impeachment, Battle of the Bulge edition

Americans suffered 75,000 casualties in World War II’s Battle of the Bulge, but apparently that’s just like Wednesday’s impeachment vote — because it’s another December day of historical importance? Or maybe because Democrats recently visited the battlefield for the 75th anniversary. You be the judge.

“Madam Speaker, three days ago I joined with a bipartisan delegation of our colleagues celebrating the 75th anniversary of the Battle of the Bulge,” said Democrat Rep. James Clyburn. “We laid wreaths at the memorials of Generals George Patton and Anthony McCullough. We visited foxholes that were occupied by some brave soldiers who fought in some of the worst winter weather ever visited upon a battlefield, and we visited the Luxembourg American Cemetery, the final resting place of thousands of them, and General George Patton. They were not summer soldiers in their efforts 75 years ago to preserve the Republic and we must not be sunshine patriots today in our efforts to protect the Constitution upon which this great Republic stands. While our fight is not in the trenches of battlefields but in the hallowed halls of this Congress, our duty is no less patriotic. I yield back.”

Speaker of the House Nancy Pelosi continued the theme:

“We in Congress must stand up and make clear to the American people and to all people that this body still stands by the principles enshrined in the Constitution and defended by generations of Americans. Last week, in observance of the  75th Anniversary of the Battle of the Bulge, members travelled to that hallowed ground to express our gratitude to the heroes of freedom who sacrificed everything to secure victory of freedom over tyranny, not just for America, but for the world. The veterans of that battle who were there, in their 90s, told us how after the war was won, the Europeans to whom they liberated would ask, ‘Why did you risk all for us? You don’t know us. And give your lives to save us, we’re not Americans.’ And our men would say, ‘We came here to fight for you, not because you are Americans, but because we are Americans.’ …. [quoting Rep. Cummings] ‘When the history books are written about this tumultuous era, I want them to show that I was among those in the House of Representatives who stood up to lawlessness and tyranny.’”

We see your Battle of the Bulge analogy, and raise you Pearl Harbor

How does impeachment compare to the day the Japanese surprise-attacked Pearl Harbor, destroying nearly 20 American ships, over 300 airplanes, and killing 2,403 sailors, soldiers and civilians?

“December is such a great month, there are so many great dates in December,” Kelly said. “We talk about wonderful things that have happened in Decembers in the past. In addition to Christmas… the Boston Tea Party took place in December. But also December 7, 1941, a horrific act happened in the United States. It’s one President Roosevelt said is a date that will live in infamy. Today, December 18, 2019, is another date that will live in infamy… just because you hate the president of the United States, and … you’re so blinded by your hate that you can’t see straight, you’ve decided the only way to make sure this president doesn’t get elected again is to impeach him on the floor of the people’s House, the bastion of democracy and liberty in the whole world, we have decided that political power is far more important than principle. I would urge all members of the House to vote no on impeachment and to look their voters in the eye… the voters will remember next November what you’re doing this December. This is a terrible time. This is a date that will live in infamy.”

This is like the Revolutionary War, and the war to end slavery

In an interview with CNN ahead of the floor speeches, Democratic Congresswoman Pramila Jayapal compared the need to “fight very hard for our democracy” during impeachment to the fighting of the Revolutionary war and to end slavery.

Rep. Hakeem Jeffries, Democrat from New York, went for the whole enchilada in his floor speech, comparing the need to vote for impeachment to the emancipation, sufferage, and civil rights movements.

But the most outrageous historical analogy was yet to come.

Jesus Got a Fairer Trial

Rep. Barry Loudermilk was so incensed by the Democrats’ impeachment proceedings that he made a favorable reference to Pontius Pilate.

“When Jesus was falsely accused of treason, Pontius Pilate gave Jesus the opportunity to face his accusers,” Loudermilk said on the floor. “During that sham trial, Pontius Pilate afforded more rights to Jesus than the Democrats have afforded this president and this process.”

Is Trump facing crucifixion if he’s impeached? No; but don’t let that get in the way of the overwrought rhetoric. According to House Republicans, Jesus got a fairer trial than Trump.

Rep. Loudermilk: “When Jesus was falsely accused of treason, Pontius Pilate gave Jesus the opportunity to face his accusers.” pic.twitter.com/HqlRYFMIaN