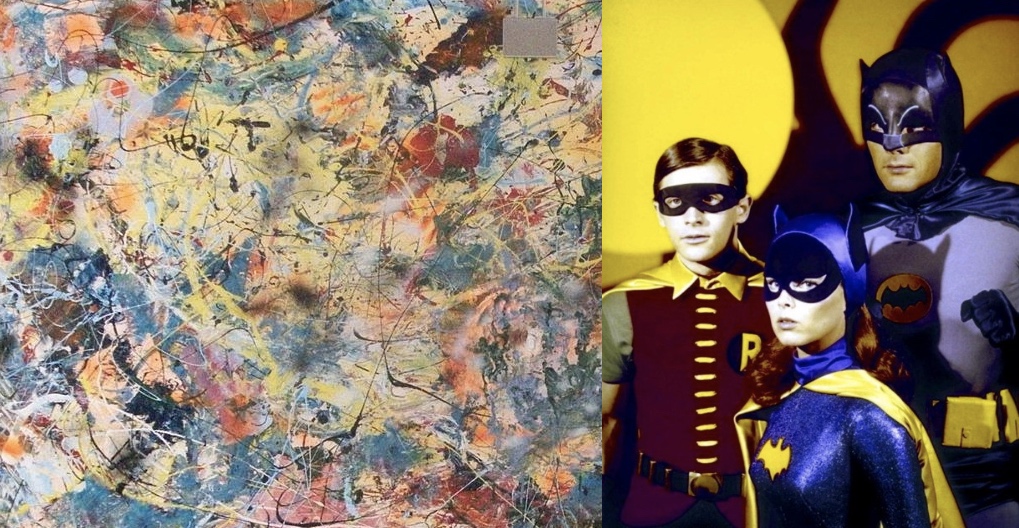 The secret’s out. My dual identity has been discovered. By day, I spend my time in the company of serious writers and thinkers, such as Homer, Dante, Shakespeare, and Thomas Aquinas, but by night I sit down with my eleven-year-old daughter to watch episodes of Batman, the 1960s television series starring Adam West and Burt Ward as the dynamic duo.

The reason for my living a double-life is simple enough. I want to share with my daughter the innocent pleasure and rambunctious fun that I had as a child. I remember enjoying Batman when it was first aired in England back in the late sixties, when I was a wee lad of only five or six-years-old. I remember receiving a toy Batmobile for Christmas and playing with it in a world of my own, a world of imaginative innocence in which virtuous superheroes battled it out with vicious villains and in which the darker and deadlier side of the “swinging sixties” had no place. I was blissfully oblivious of the dark side of 1960s culture, of the hippies and their world of sex, drugs, and rock n’ roll, or of Vietnam and Soviet repression. I knew nothing of real violence and its sickening consequences. The violence that I knew was the harmless fisticuffs of Batman and Robin or of that other dynamic duo, Tom and Jerry, every well-delivered punch punctuated with exclamations and innocent expletives: Splat! Ouch! Oooof! Oh what joy! Why would I not want my own daughter to experience such innocent pleasure, shielded as she is from the less than innocent pleasures of contemporary television, especially if it allowed me to relive the innocence of my own childhood at the same time?

Although I am no longer able to see Batman with eyes of untainted innocence, I can still rekindle lost innocence by entering into the world of stately Wayne Manor and Gotham City, much as I enter into other worlds, such as Middle-earth or Narnia, by opening the pages of a book, or by walking with eyes of wonder into a wardrobe. It is true, however, that I see some things now which I would not and could not have seen as a child, especially the deadpan delivery of deliciously delightful lines, aimed at the adult viewers while going over the heads of their children. This is why my daughter and I do not always laugh at the same time or at the same things. Sometimes she doesn’t get the joke, which is as it should be. Take, for instance, the scene in which Bruce Wayne walks a beautiful millionairess, or million-heiress, back to her apartment door after a romantic date in which wedding bells seemed to be in the air. She asks him if he would like to come in for some milk and cookies, adding seductively that she had baked the cookies herself. How could Bruce possibly resist? As he prepares to cross the threshold into her apartment, he looks directly at the camera and tells us that “a man cannot live on crime fighting alone.” No indeed. He needs milk and cookies too!

As we’ve enjoyed our regular visits to Gotham City, rejoicing in the capers of the Caped Crusader and the Boy Wonder, I never imagined that any episode of Batman would contain anything warranting serious consideration in The Imaginative Conservative. That was until we watched “Pop Goes the Joker” and “Flop Goes the Joker,” a two-part episode, originally aired on two consecutive nights in March 1967. The whole episode is a satirical spoof on the pretentiousness of modern art, side-splittingly out-loud funny while being simultaneously the best exposé of the naked nonsense beneath the Emperor’s new clothes. One highlight among many was the art competition in which five of the world’s most famous artists raced to produce a work of art against the clock. Each of the artists was a splendidly slapstick caricature of their real-world counterparts: Pablo Pinkies, “the well-known Spanish artist famous for his pink and blue periods”; Jackson Potluck, looking like a beatnik-hippy hybrid; Leonardo Davinsky, “famous for his fresco, Midnight Snack”; Vincent van Gauche, “founder of the neo-gammon school”; and last but not least, “Gotham City’s very own The Joker.”

As the competition begins, we see Pablo Pinkies throwing whole cans of paint at the canvas. Meanwhile, Jackson Potluck places his canvas on the floor, reclines in a wheelbarrow of paint and then rolls around on the canvas, using his paint-saturated clothes as a brush. My personal favorite was Leonardo Davinsky who let his pet monkey throw paintballs at the canvas. As the action unfolds, the specially invited audience, including Bruce Wayne and Dick Grayson in the front row, guffaw with laughter at the sheer absurdity of it all, in stark contrast to the panel of judges who take everything with perfect and po-faced seriousness. When time is up, the judges move from one canvas to the other, considering their relative merits. The last canvas they come to is The Joker’s. As the other artists had worked against the clock, he had been pretending to paint but had not actually sullied his canvas, which is naked in its untouched state, surely a thinly-veiled metaphor for Hans Christian Anderson’s story, “The Emperor’s New Clothes.” The judges look perplexed as The Joker tells them that the untouched and unblemished canvas is titled “Dead Bat in Mauve.” They can’t see the bat, the Joker tells them, because it’s dead. Considering this to be brilliantly “symbolic,” the judges award the prize to The Joker, who announces that he is going to start an elite art school for millionaires only, which is clearly a ruse to fleece the gullible rich.

Much more fun is had at the expense of modern art and its gullible adherents, including an observation by Bruce Wayne that “even a three-year-old” could produce the objects that the aptly-named Joker is passing off as art.

As I finished watching this episode, my eyes still watering with tears of laughter, I realized how the writer, Stanford Sherman, had pricked the priggish pomposity and pride of the contemporary art world with a healthy and rambunctious humor, reminding me of certain characters in novels by Chesterton or of the satirical wit of Jonathan Swift in Gulliver’s Travels. Never has the naked nonsense of nihilism been exposed so uproariously and so good-naturedly. There were no bitter gibes, no fighting of cynicism with cynicism, no employment of evil means to a purportedly good end. This was nothing less than the humor of humility, the lighthearted angelic laughter in the face of the absurdity of diabolical Pride. In the light of such laughter, we think perhaps of Chesterton’s quip that angels can fly because they take themselves lightly while the devil, taking himself too seriously, falls by the force of his own gravity. As I recall the delightful hour spent in Gotham City, I can almost hear the laughter of angels as the devil falls for his own foolishness.

“Holy histrionics,” cries Robin. “The joke’s on The Joker.”