You Are Who You Eat With 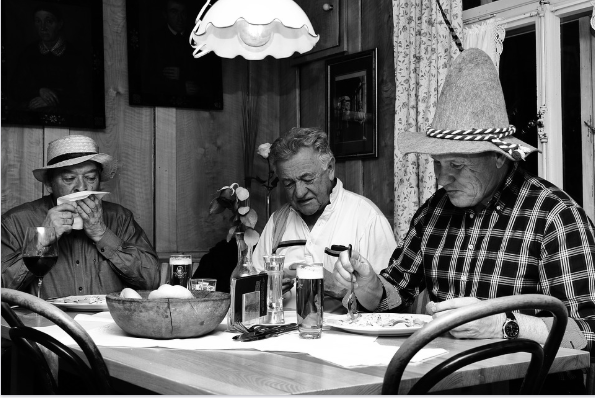 Why do we make food?

The obvious answer is so we can have food fights.

Joking aside, when I reflect on my experience with the culinary arts – whether carefully crafting Buche de Noel for Christmas or whiling away a summer afternoon making flakey scones – food is ultimately about people and community.

Yet it appears that I have cuisine all wrong. As I learned in a review of “Midnight Chicken,” a new semi-autobiographical cookbook which provides “the peculiar warm comfort of good food writing,” we should approach “food as refuge, food as sanctuary, food as an affirmation of life.”

Now, what is striking about “Midnight Chicken” is not the fact that we should be eating chicken at midnight (which sounds both risqué and exciting), but this notion of “food as an affirmation of life.”

It sounds quite nice, but it’s also vaguely meaningless, for affirming life is quite distinct from affirming lives.

In many ways we are already treating food as if it affirms but one life: our own.

According to the Atlantic:

“Americans rarely eat together anymore. In fact, the average American eats one in every five meals in her car, one in four Americans eats at least one fast food meal every single day, and the majority of American families report eating a single meal together less than five days a week.”

I’m not blaming cookbooks like “Midnight Chicken” for this cultural development. But I think it is a telling symptom of an isolated world. Because if we’re increasingly eating alone anyways, why not turn to food as a “refuge” and “sanctuary”? Why not make it “an affirmation of life”?

But in doing so, are we missing something important?

“In many countries, mealtime is treated as sacred…. In many Mexican cities, townspeople will eat together with friends and family in central areas like parks or town squares. In Cambodia, villagers spread out colorful mats and bring food to share with loved ones like a potluck.”

Contrast this with the individualized indulgence found in “Midnight Chicken” where there are no table conversations, no bumping elbows at the table, nor a collective sigh at Uncle Ernie’s propensity for belching.

In short, no community.

Frankly, this is rather sad, for as noted in the Atlantic, “eating alone can be alienating,” particularly at midnight.

By contrast, “The dinner table … [which acts] as a unifier, [is] a place of community. Sharing a meal is an excuse to catch up and talk, one of the few times where people are happy to put aside their work and take time out of their day.”

There is nothing wrong with enjoying good food by oneself. But in an age where we already struggle to build strong interpersonal relationships, do we really need to chip away at one of the few remaining institutions (preparing and sharing a meal) with cookbooks geared toward individual enjoyment of both book and bread? Is it time to focus instead on rebuilding community around stove and table?