Christianity and the Big Bang 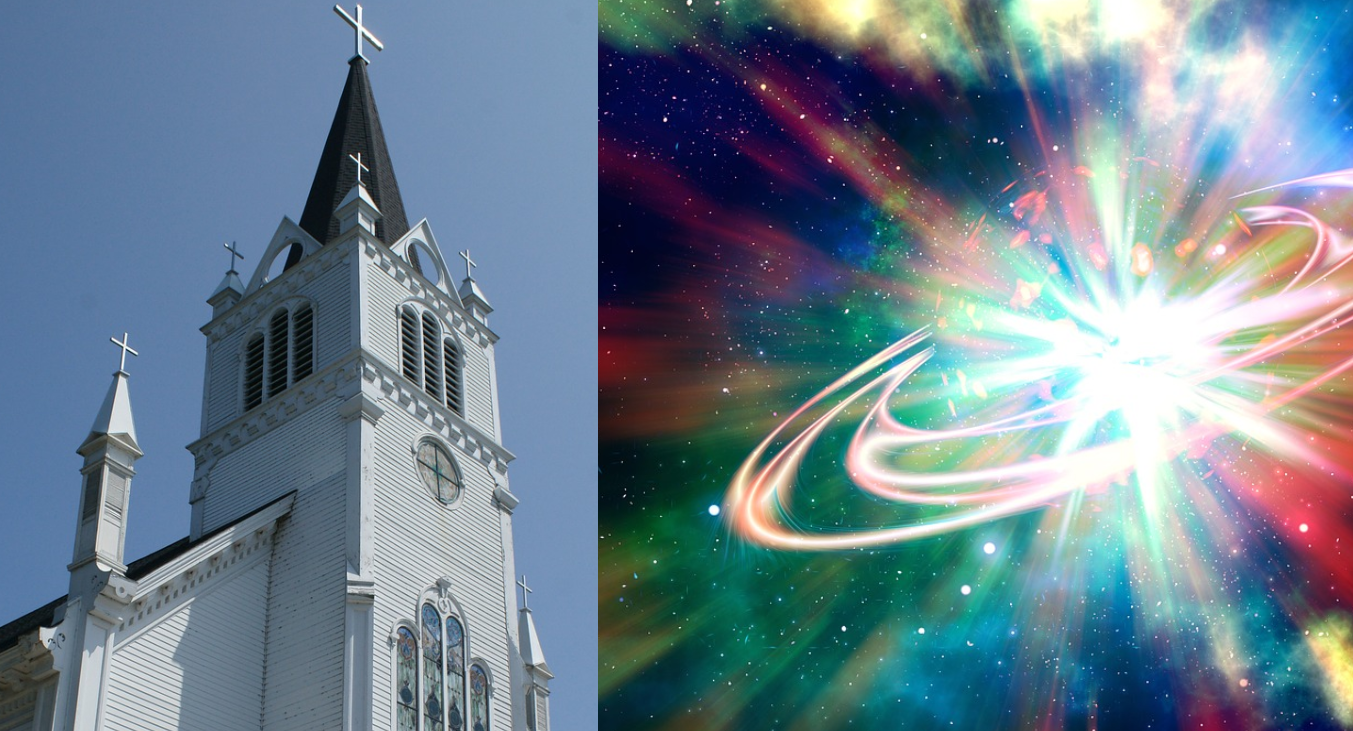 I once saw a bumper sticker that said, “The Big Bang Theory: God spoke, and ‘Bang!’ it happened.”

The implication was clear: in addition to being the least funny sitcom ever made, the Big Bang Theory is an attack on religion, an attempt by scientists to step outside their proper sphere and disprove once and for all the existence of a Creator God.

Many Christians share this view. Young-earth creationist Ken Ham’s website Answers in Genesis defines the Big Bang Theory as “a naturalistic story about the origin and development of the universe” that “contradicts the biblical teaching of creation.”

I myself am no astrophysicist, but for anyone unfamiliar with the Big Bang theory, here’s my best attempt at a layman’s explanation. We can observe that the universe is both expanding and cooling at a constant rate. So, if we turn back the clock far enough (around 14 billion years to be exact), we eventually arrive at a time when all of the matter and energy in the universe was concentrated in one infinitely small point, or singularity. Then, the singularity exploded. Particles shot out in every direction and, as they cooled, came together to form molecules, planets, stars, and galaxies.

Obviously, this cosmological model, despite its near-universal acceptance among scientists, leaves several major questions unanswered: How did the singularity form? Where did all this matter come from?

Scientists have advanced several naturalistic solutions to these problems, but in his lecture “The Beginning of Time,” Stephen Hawking rejects almost all of them. The one to which he clings is, by his own admission, highly abstract and conjectural, riddled with words like “if” and “seems.” He also admits that if his solution is false, then the only other answer is that “[t]here would have to be something outside the universe, to wind up the clockwork, and set the universe going.” In other words, “God did it” still remains as viable an answer to the mysteries of the Big Bang as any other. A universe that began with the Big Bang is a universe in which the supernatural cannot be discounted.

In fact, when the theory exploded onto the scene in 1927 (first proposed, by the way, by Catholic priest and astronomer Georges Lemaître), it was seen as a blow to atheists and a vindication of Christianity, replacing the previously dominant idea of a “steady state” universe that had always existed and therefore had no need for a Creator.

But don’t take my word for it. Here’s atheist physicist William Bonnor who, in the 1950s, rejected the Big Bang because he was uncomfortable with its theological implications:

The underlying motive is, of course, to bring in God as creator. … It seems like the opportunity Christian theology has been waiting for ever since science began to depose religion from the minds of rational men.

[I]t would seem that present-day science, with one sweep back across the centuries, has succeeded in bearing witness to the august instant of the primordial Fiat Lux [‘Let there be light’].

Here’s Christian apologist C.S. Lewis in his 1943 essay “Dogma and the Universe”:

If anything emerges clearly from modern physics, it is that nature is not everlasting. The universe had a beginning, and will have an end. But the great materialistic systems of the past all believed in the eternity, and thence in the self-existence of matter. … This fundamental ground for materialism has now been withdrawn.

And here’s author G.K. Chesterton in his 1933 biography of St. Thomas Aquinas:

[F]reethinkers of many sorts had often said they had no need of a Creation, because the cosmos had always existed and always would exist… Most modern agnostics (who are delighted to have their ideas called dreadful) cried out all the more, with one accord, that the self-producing, self-existent, truly scientific universe had never needed to have a beginning and could not come to an end. At this very instant, quite suddenly, like the look-out man on a ship who shouts a warning about a rock, the real man of science, the expert who was examining the facts, announced in a loud voice that the universe was coming to an end. He had not been listening, of course, to the talk of the amateurs; he had been actually examining the texture of matter; and he said it was disintegrating: the world was apparently blowing itself up by a gradual explosion called energy; the whole business would certainly have an end and had presumably had a beginning.

Far from being an attack on the faith, the Big Bang Theory is actually far more compatible with the Christian doctrine of Creation than any of the cosmological models that science had previously produced.

Of course, as Lewis reminds his readers, we “should not lean too heavily on this [theory], for scientific theories change,” but the Big Bang Theory has now stood virtually unchallenged for over 90 years and continues to sustain the hope that, although scientists have unlocked many of the mysteries of the physical world, they cannot rule out the existence of something (or Someone) beyond it.