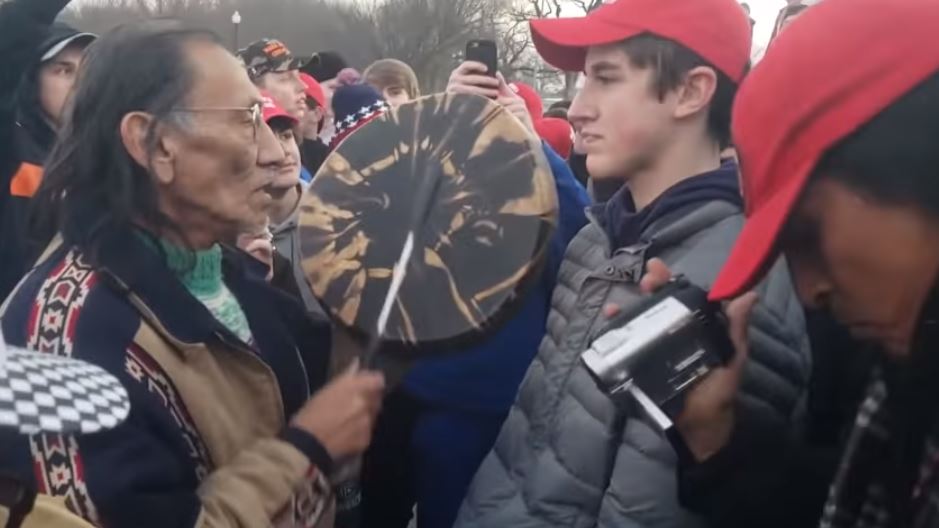 Boys, in you I see my own teenage sons. Shoulder to shoulder they will stand with you and march into the culture war that you are unfortunately inheriting.

You have been through a lot already:

1) Yesterday was supposed to be a day of celebration for my middle brother Alex, who got married last night. Instead my family had to deal with the fallout of my youngest brother #MichaelHodge being falsely accused for standing & smiling in front of an indigenous man with a drum.

2) People then proceeded to spam my family with harassments and threats of physical violence. We then find out our parents address was posted online. If that wasn’t enough, our family operated business has been slandered and attacked.

3) No one reviews evidence or does any due diligence, they immediately escalate things to a state of frenzy over much of nothing. The zealots scream for the head of #MichaelHodge knowing that their [sic] will be zero consequences to them if anything happens to him

4) My parents, uncles, & aunts, receive messages stating they are pieces of s— parents and won’t be able to protect #MichaelHodge forever… seriously what kind of behavior is this?

5) #MichaelHodge is the best kid I know. He volunteers for Special Olympics (took them skiing this Thursday) is involved in the church youth group, doesn’t drink/smoke (volunteer member of the Drugs Free Club of America) and is an aspiring chef.

6) People then started circulating articles of him regarding his dreams and goals of being a chef, finds the college he plans on attending and proceed to blow them up encouraging them to rescind offer and calling him a racist POS….

7) You reach out saying how “terrible” of a family we are, defame us, threaten us, and you know nothing about us. Yet you circulate the information and spam us like it is the only “truth” that has ever existed in your lives.

8) You condemned my parents for being horrible role models, yet you jumped to conclusions and were ready to string up an innocent dude? Is that what you are teaching your children/family? I sure hope not….

9)It saddens me people have nothing better to do on Saturday then scour the internet for drama & then dig up info on a family & rile up an army to attack them. Hold yourselves to a higher standard, set a better example for your sphere of influence, we will all be better off for it.

Know that while the wolves are after you now, boys, this horror show will pass – and soon. Next week, it will probably be as if this disgusting circus of an online mob never existed. The wolves will be chasing some other victim, forgetting completely what they were outraged about even just a week ago. Also, know that tens of millions of Americans are defending you online, in the lunchroom, over the phone, and wherever else the battle finds them. You are not alone. Really.

With that knowledge, do not back down. No matter how fierce the storm becomes, hold fast. I, like so many millions of Americans, have watched the video of what happened. The narrative is a lie.

And for those who want to watch the two-hour video of how this national calamity developed, here you go:

Boys, you did just fine, do not apologize. Hold your chins high and steel your resolve. Remember that you traveled over 500 miles to rally for the defense of tiny people who are the least able to defend themselves. That is a noble act, which reveals much about your character.

Having some sense of your character and your Faith, I urge you to pray for those attacking you. It goes against everything you probably want to do right now. You want to fight back, you want to tell the truth, you want your good names restored. I get it. Believe me, I get it. Nonetheless, pray for your enemies. It will help you.

Consider the character of those who attempt to crucify you. What kind of person, knowing full well the power she holds through mass communications, purposefully frames the narrative to turn a national mob on a group of teenage boys? Those who started this vile campaign were never seeking the truth. They saw an opportunity to crush those whom they hate by destroying you.

Frankly, I am disgusted by so many “leaders” in the media and commentariat. I know the temptation to jump on a bandwagon and have made mistakes in the past. There are those who did so this time, but the truth is that there are far too many in media who made no such mistake. They lust for the destruction of others, of anyone with whom they disagree. They use their reach and positions to advance narratives that affirm their beliefs and values, not to pursue truth. These are the actions of totalitarians, of destroyers. Far too many in the media speak of truth, tolerance, and the dignity of the human person, but those are not truly the desires of their hearts. No, too many in the media seek power and the adoration of their peers. They are men without chests, as C.S. Lewis so perfectly wrote.

Unfortunately, our culture is going to get worse before it gets better. The culture war has become a total war. Nothing is off limits. Anything or anyone who pushes back as you did by attending the March for Life will be targeted.

What is happening now is not the result of decisions made in the last week. No, there has been a purposeful gutting of our national character over many decades through the rejection of the transcendent, a rejection of the Good, the True, and the Beautiful. There was a long-march through the institutions that brought us to this point and now it is time for all of us to pick up our swords and shields to make our own long-march through the institutions in order to take back the culture and restore decency.

As for you, boys, it is said that fire refines gold. Let this fire refine you, let go of any desire to destroy those attacking you. Forgive them, pity them. They seek to gain the world but forfeit their souls.

And having been refined in such a fire, I do believe that you will do great things for your God and country.