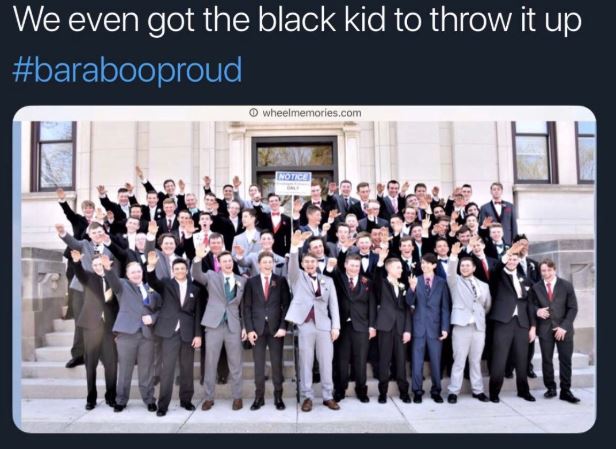 A controversy erupted in Wisconsin last week when a photo of a group of boys was posted on Twitter. Not only were almost all of the boys white (a fact alarming in itself to some people), but in what looked to be a high school prom photo, they were giving what appeared to be the Nazi salute.

Photographer Pete Gust posted the picture from Baraboo High School on Twitter, causing a media feeding frenzy, and Gust to apologize. Local police launched an investigation, Governor-elect Tony Evers proclaimed that such things have “no place in Wisconsin,” and the school went on soft lockdown.

The chief reason for all the attention to the photo was surely that it feeds in to the media narrative that there is a rising tide of white supremacy in America.

In Kentucky where I live, we are treated to a news story every couple of years of some group of large white men in some small to town appearing publicly in white hood whose numbers could comfortably be counted on two hands. It is usually Larry, Daryl and his other brother Daryl who have had a few too many Bud Lights and with nothing constructive to do. But instead of just shaking our heads at stupidity, we are supposed to react with alarm.

At least one story on the episode pointed out that hate crimes have risen 17 percent. The statistics on random acts of meaningless violence were apparently not available.

What is never asked is why, when an increasingly radicalized left has taken over virtually every cultural institution in our society–government, the media, and academia, we are supposed to be concerned about the right.

But as it turns out, the incident has less to do with racism than the sad state of education in Baraboo Wisconsin–and probably everywhere else in America.

In an interview on NPR’s “It’s Been a Minute,” a panel of journalists discussed the Baraboo outrage and interviewed the most objective person they could find: a gay man with kids at the school. Yes, he was white, but nobody’s perfect. The man revealed that his own daughters–and apparently many of the boys themselves, didn’t even know the significance of the hand gesture they were using in the photo:

“I called my ex-wife to get my daughters on speakerphone so that the four of us could discuss it together. And they weren’t aware of a lot about the Nazi army itself. So they didn’t understand what that meant, which was more shocking to me than the picture itself. It’s like, how did they not teach that? How do they not know that? And I explained to them that they need to know. You need to know what that means. You need to know what it means to be marginalized and why that issue is such a – like, why people are freaking out about it.”

The question came up whether the boys should be punished. But the problem is not racism. The problem is Baraboo High School is apparently not teaching history. Who’s responsible for that?