Why You Should Watch ‘Cobra Kai’ Instead of ‘The Last Jedi’ 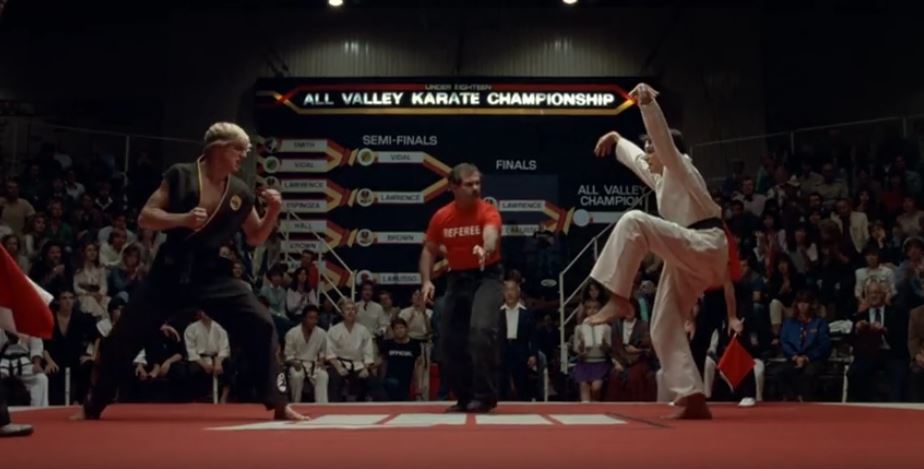 The latest instalment in the Star Wars franchise was a huge disappointment to die-hard fans.

The movie’s sins are too numerous to recount here, but they amount to a complete abandonment of everything that made the original series a success in the first place.

“Star Wars is dead; The Last Jedi killed it” is the mantra of those whose only hope is that Disney might hear their plea and scrap Episode 8 entirely from the official canon.

Over 100,000 people have signed a change.org petition to that effect.

I actually enjoyed the movie when I saw it, but on review the criticisms are unassailable.

The following video rounds them up nicely (Spoiler warning!):

Luke could have taken on the role of mentor and wizened Jedi Master to Rey, reprising Obi-Wan Kenobi’s role in the original movie.

Instead The Last Jedi depicts Luke as a broken, cynical and conflicted version of his former self, with a deeply unsatisfying rationale for this change of heart.

Skywalker’s unfortunate transformation is just one of many “surprises” that feel like the product of a contrarian writer/director looking to make his mark by upsetting the audience’s expectations.

Just do the opposite of what everyone expects, and at least the critics will like it.

The upshot of this subversive approach to the film is that it lacks the archetypal significance found in the original movies.

Luke doesn’t get to be the archetypal mentor, nor does Rey get to grow and be transformed through her struggles. As the above video states satirically, “it’s like the classic hero’s journey but you cut out all the middle stuff”.

On the Character Assassination of Luke Skywalker details exhaustively the betrayal of the franchise, and how The Last Jedi “completely destroys [Luke’s] established character and turns him into a terrified and cowardly old man committed to dying alone wallowing in regret…and retroactively subverts the hopes and overall message of the OT [original trilogy].”

An unlikely answer to the subversion of Disney’s Star Wars is Youtube’s new series Cobra Kai.

Cobra Kai is a continuation of The Karate Kid, picking up 34 years after the epic showdown between Daniel LaRusso and Johnny Lawrence.

With unexpected sympathy and nuance, Cobra Kai depicts LaRusso and Lawrence as two sides of the same coin. Danny may have won the tournament and at face value he’s the “winner” in all other aspects of life as well. With a loving wife and children and a successful business, Danny is a prominent member of the community.

By contrast, Johnny is an archetypal loser with an estranged son and ex-wife, no job, no prospects, drunk and still embittered over his tournament loss three decades earlier.

Yet it’s Johnny who is the hero of the series. He brings an anti-hero edge to the role of mentor to a new generation of “losers” desperately in need of strength, discipline, and encouragement.

We’re a long way from the heyday of Karate in the early 1980s, but the anachronistic image of an “old-school” American dojo proves almost as exotic to Millennials as Mr Miyagi’s esoteric Eastern wisdom once did to Gen Xers.

The Cobra Kai motto “Strike first. Strike hard. No mercy,” becomes a source of strength to a cohort of bullied and outcast teens. But at the same time we see Johnny grow and develop beyond the simple ethos as he takes on genuine responsibility for the first time in his life.

In fact Star Wars and this latest addition to the Karate Kid franchise have much more in common than one might first think.

The theme of fatherhood in particular is central to both.

Karate aside, Cobra Kai remains true to the original movie’s theme of absent or dysfunctional fathers, and father-figures. Broken relationships, positive and flawed role models, and the hunger for genuine discipline, strength, mentoring and the father-son bond lie at the heart of the series.

Youtube has shown what can be achieved if the themes of a source material are respected. Being able to draw on original cast members, reviving iconic scenes, and invoking beloved characters are all a bonus, but no substitute for remaining true to the underlying message.

Watching Cobra Kai, it’s hard not to conclude that Disney squandered their investment. They had three original cast members and numerous beloved characters at their disposal. They could have done amazing things with them, but instead used them up in superficial, unfulfilling and subversive moves that undermine the original trilogy.

Zac Alstin is associate editor of MercatorNet. He blogs at zacalstin.com and has published a fantasy novel, and a philosophical guide to weight-loss of all things. This article has been republished with permission from MercatorNet.