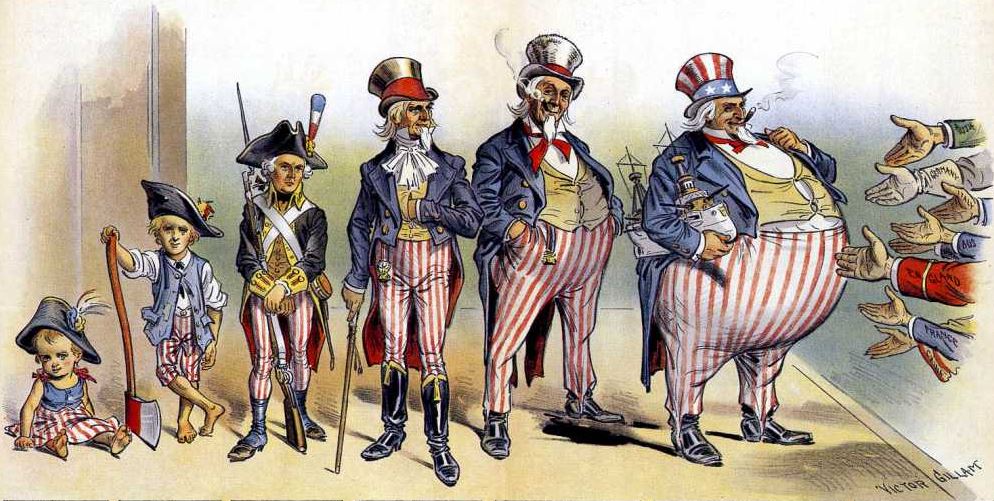 Just how much imperialism is in the DNA—so to write—of the American character? When Frederick Jackson Turner delivered his famous address, “The Significance of the Frontier in American History,” on an outrageously humid Chicago afternoon, July 12, 1893, he warned that what had been a healthy frontier expansion might well turn into bald-faced imperialism with the formal closing of the frontier. Though the last homestead in the continental United States would not be claimed until 1919, Turner believed the frontier over in 1890 as there was no visible frontier line on the census maps of that year. Americans, it seemed, had filled everything in, from Plymouth Rock to Rodeo Drive. Not quite, but close.

More recently, the University of Notre Dame’s Walter Nugent, an expert on frontiers and empires, confirmed Turner’s suspicions, arguing that our westward movement

instilled in the American people the habit of empire-building…. All along, the United States was also a republic. ‘Republic’ and ‘empire’ have not always fit well together. Today there is a good chance that ‘empire’ might eclipse ‘republic.’ Old habits can become unthinking practices…. Thus we have always been an imperial nation, and remain so, but the shape of the American empire has shifted over time. Its present form is different from either our own past ones or historic ones like Rome or Britain. It is still developing…. The three historic American empires have all rested on an ideology of expansion. Military solution, overlain by rationales and high ideals, have consistently been considered effective and justified. [Walter Nugent, Habits of Empire (2008), xiv-xvii.]

Proving Turner correct, talk of foreign expansion filled the halls of Congress in the 1890s. The question was not if, but when and where. Into Latin America? Into the Pacific? Toward Asia and Russia?

Whether Prof. Nugent is correct or not in believing that Americans had always been expansionistic, America had certainly experienced at least one devastating and blatantly imperial moment prior to the 1890s—in the Mexican War, 1846-1848. No one with any sense of dignity could defend America’s brutalization of the Mexican people during that war. Welcomed, generally, as liberators from the chaos and tyranny of 1840s Mexico, American soldiers stupidly and unethically abused, raped, and plundered the Mexican people. Only a few voices at the time—mostly eccentric and lonely voices such as that of John Quincy Adams and Henry David Thoreau—protested the southward invasion into the northernmost realms of Latin America, but the “moment” did not seem to have any staying power. Cooler and more guilt-ridden souls—such as of Robert E. Lee, Thomas Jackson, and U.S. Grant—feared that God would one day punish us for our crimes against the Mexican people, and they each believed the Civil War to be exactly that.

Upon hitting the Pacific coast in frontier settlement, though, Americans in the 1890s did again look outward, imagining a world under American domination. Of course, rarely did imperialists put it so crassly. Yet, they put it crassly enough. Even more tellingly, it was the progressives who put it most crassly. Indeed, historically, there is no separation of progressivism from imperialism, nor progressivism from racialism and desire to White-American-Protestant domination of the world.

In a widely influential speech, delivered on September 16, 1898, Indiana progressive Albert Beveridge explained exactly why America must prove itself worthy of God’s grace—by remaking the world in our image. To do anything less would be sacrilege and dishonor, Beverage claimed. Beverage’s god, though, possesses the harshest aspects of the Old Testament God, but without the personality as expressed by Moses. Beverage’s language is so bad as to be little but a caricature of the evangelical, imperialistic progressive of the era. He is worth quoting at length.

He begins, not surprisingly, with an appeal to America as the “new chosen people”:

It is a mighty people that He has planted on this soil; a people sprung from the most masterful blood of history; a people perpetually revitalized by the virile, man­producing working­folk of all the earth; a people imperial by virtue of their power, by right of their institutions, by authority of their Heaven-directed purposes—the propagandists and not the misers of liberty.

Why would the almighty creator of the universe bestow upon us so many gifts were we not to use them to redeem the world, to make the earth the center of the New Jerusalem, here and now. Not in some dark room confining, light years away, but here and now.

Beverage hopes we have the strength to enter his vision [with no apologies to Marty Haugen, the most wretched of modern hymnists]:

It is a glorious history our God has bestowed upon His chosen people; a history heroic with faith in our mission and our future; a history of statesmen who flung the boundaries of the Republic out into unexplored lands and savage wilderness; a history of soldiers who carried the flag across blazing deserts and through the ranks of hostile mountains, even to the gates of sunset; a history of a multiplying people who overran a continent in half a century; a history of prophets who saw the consequences of evils inherited from the past and of martyrs who died to save us from them; a history divinely logical, in the process of whose tremendous reasoning we find ourselves today.

Just as Jesus commanded his disciples to go two by two and convert the entire world, so God has called America to remake all in our image.

Therefore, in this campaign, the question is larger than a party question. It is an American question. It is a world question. Shall the American people continue their march toward the commercial supremacy of the world? Shall free institutions broaden their blessed reign as the children of liberty wax in strength, until the empire of our principles is established over the hearts of all mankind?

Amazingly, Beverage even inverts the traditional notion that the Pacific and Atlantic—by nature and God’s will—separate us from the horrors of Europe and Asia. To the contrary, Beverage rants, the oceans are highways and bridges, connecting America to the world. “The ocean does not separate us from lands of our duty and desire—the oceans join us, rivers never to be dredged, canals never to be repaired.” What nature left undone, man has ingeniously rectified. “Steam joins us; electricity joins us—the very elements are in league with our destiny. Cuba not contiguous? Porto Rico not contiguous! Hawaii and the Philippines not contiguous! The oceans make them contiguous. And our navy will make them contiguous.”

With the major exception of the unjust attacks on Mexico in the 1840s, the United States had resisted most foreign adventures. To be sure, American citizens had formed filibustering missions and had invaded California, Texas, Mexico, and several countries in Latin America, but these were private militias and groups, unsanctioned—at least officially—by the U.S. government. With Beverage, Teddy Roosevelt, Woodrow Wilson, and their malicious imperial progressive pretensions, the United States became addicted to power over, and suppression of, foreign peoples.

We often think of U.S. foreign intervention as beginning under Wilson’s administration, but it had gone on—rather virulently—commencing a full decade-and-a-half before Wilson entered the White House, and it continued unabated for years and years. Most shockingly, the U.S. waged a jungle operation—quite similar to our efforts in Vietnam—in the Philippians for five years, beginning in 1898. During that half-decade, 4,300 U.S. soldiers died, but they also took with them the lives of nearly 60,000 Filipinos.

It is well worth remembering in 2018, that our heritage of foreign intervention is a new one, an innovation introduced by the progressives. To imagine a clean and humane progressivism is, simply, a fool’s errand. There is no such thing as a non-racist and non-imperialist progressivism. There never has been, there never can be, and there never will be.