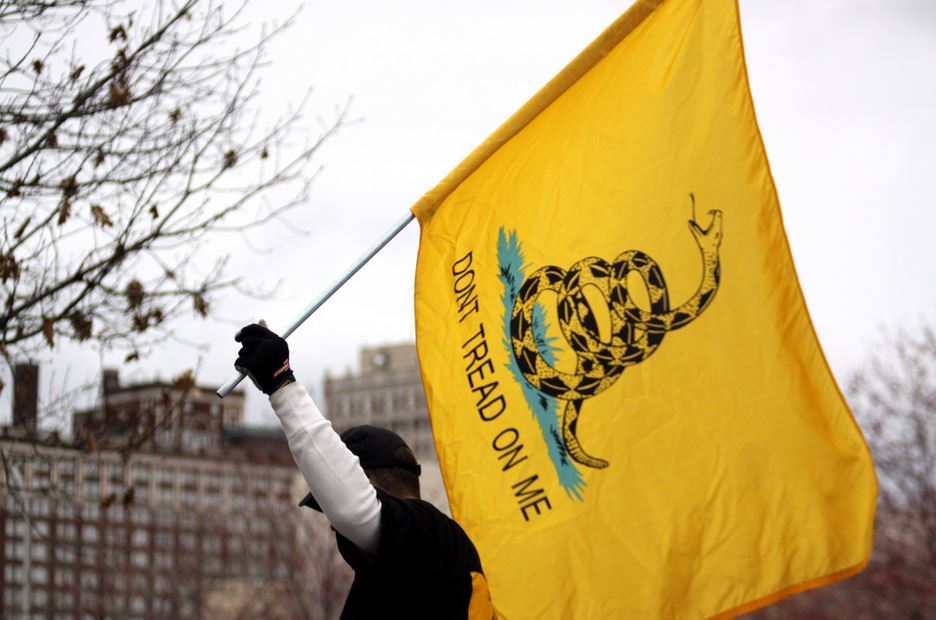 You probably haven’t even heard about it, but yesterday there was an exchange in the Supreme Court that future generations will regard as one of the most significant revelations of our political era.

The case of Minnesota Voters Alliance v. Mansky concerns a Minnesota statute that broadly bans all political apparel at the polling place. When Andrew Cilek went to vote in 2010, he wore a shirt bearing the image of the “Don’t Tread on Me” flag and a button that read “Please I.D. Me.” The poll worker asked him to remove the shirt and button because it supposedly violated the state law.

Cilek filed a lawsuit opposing the regulation as an infringement on his First Amendment right to political expression. He also noted that the standard for what is acceptable is arbitrary and the enforcement itself could be politicized since the polling workers are chosen by local political parties.

In the oral arguments, Justice Alito agreed that the law does seem arbitrary and observed that “so many things have political connotations, and the connotations are in the eye of the beholder.” How could any poll worker, he asked, be even-handed in enforcing the regulation?

Daniel Rogan, who defended the statute for the state before the Court, responded that the political speech being conveyed by the wearer had to be “understood as relating to electoral choices and it has to be well-known.”

Alito said “that makes it worse” since the poll worker applying the “reasonable person” standard has to not only recognize the clothing is political speech but well known political speech.

Rogan answered that what the standard meant was it would have to be something a reasonable person would consider “clearly political” and “something that’s going to be reasonably understood by voters in the polling place.” What followed was a line of questioning by Judge Alito that will go down in the history books as a prime example of liberal cluelessness and hypocrisy.

The exchange has to be seen in full to appreciate the devastating effect, so I’ll reprint each part and note which examples of clothing Rogan considers “political” and what he views as “not political”:

JUSTICE ALITO: How about a shirt with a rainbow flag? Would that be permitted?

Rogan’s conclusion: A symbol for a liberal cause (gay rights) is not political (unless there is something directly related to the issue on the ballot), and thus would be allowed.

JUSTICE ALITO: How about a shirt that says “Parkland Strong”?

JUSTICE ALITO: Even though gun control would very likely be an issue?

Rogan’s conclusion: A symbol for a liberal cause (gun control) is not political, and thus would be allowed.

JUSTICE ALITO: Okay. How about an NRA shirt?

ROGAN: An NRA shirt? Today, in Minnesota, no, it would not, Your Honor. I think that that’s a clear indication — and I think what you’re getting at, Your Honor -­

Rogan’s conclusion: A symbol for a conservative cause (gun rights) would be political, and thus not allowed.

JUSTICE ALITO: How about a shirt with the text of the Second Amendment?

Rogan’s conclusion: The text of an Amendment to the U.S. Constitution would be considered political because it is primarily supported by conservatives, and thus not allowed.

JUSTICE ALITO: How about the First Amendment?

CHIEF JUSTICE ROBERTS: No — no what, that it would be covered or wouldn’t be allowed?

ROGAN: It would be allowed.

Rogan’s conclusion: The text of an Amendment to the U.S. Constitution would not be considered political because it’s supported by people other than just conservatives, and thus would be allowed.

ALITO: . . . How about a Colin Kaepernick jersey?

ROGAN: No, Your Honor, I don’t think that that would be under — under our statute. And I think -­

Rogan’s conclusion: The jersey of a football player best known for his left-leaning political activism with the Black Lives Matter movement would not be political, and thus would be allowed.

JUSTICE ALITO: How about “All Lives Matter”?

Rogan’s conclusion: Text considered to be in opposition to the Black Lives Matter movement would be considered political, and thus not allowed.

JUSTICE ALITO: How about an “I Miss Bill” shirt?

ROGAN: Yes, Your Honor, I believe that that’s political.

Rogan’s conclusion: Wearing clothes referring to politicians who have been out of office for decades is political, and thus not allowed.

I don’t know much about Mr. Rogan, but I suspect that most people would consider him to be a reasonable person. Yet when asked to apply the “reasonable observer” standard, Rogan consistently considered views on the left to be “non-political” and views on the right to be “political.”

How could such a reasonable person be so clueless? The late novelist David Foster Wallace tells an old joke about fish and water that can help us see the problem:

There’s also an old saying that fish are the last to discover water. Something similar could be said about liberals and their left-leaning bias. They are the last to discover political bias because they assume what they believe about the world is the standard by which all other views must judged. While other people are being “political” they are merely being “reasonable.”

Christians should consider what it means for us to trust our most sacred rights—especially our rights to speech and religious freedom—to such “reasonable observers.”