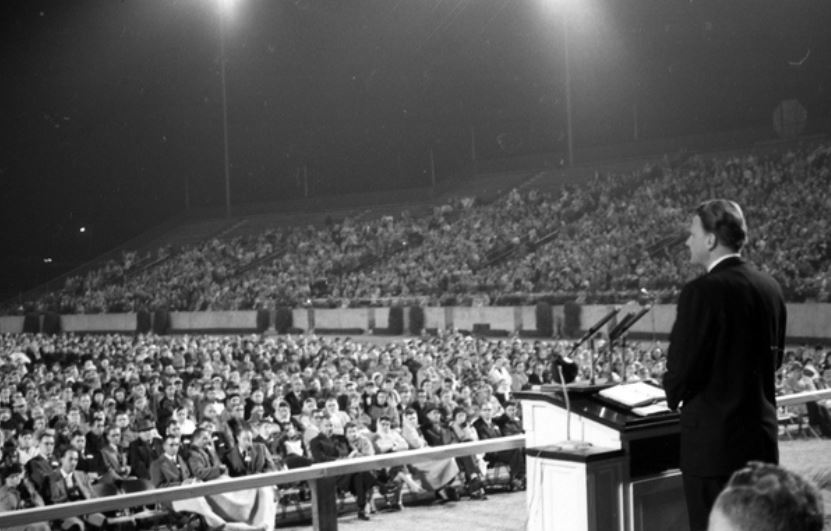 The Rev. Billy Graham died February 21st, 2018 at the age of 99. Here are five facts you should know about the man who became the world’s most famous Protestant evangelist.

1. In 1934 at the age of 16, Graham was turned down for membership in a local youth group because he was “too worldly.” A man who worked on the Graham farm persuaded the young man to go and see the evangelist Mordecai Ham. According to his autobiography, Graham was converted during a series of revival meetings led by Ham in Charlotte, North Carolina. After graduating from Sharon High School in May 1936, Graham attended Bob Jones College. After one semester, he found it too legalistic in both coursework and rules. He was almost expelled, but Bob Jones Sr. warned him not to throw his life away: “At best, all you could amount to would be a poor country Baptist preacher somewhere out in the sticks. . . . You have a voice that pulls. God can use that voice of yours. He can use it mightily.”

2. Graham was ordained by a Southern Baptist Convention church in 1939. He intended to become a chaplain in the armed forces but, shortly after applying for a commission, he contracted mumps. After a period of recuperation in Florida, he was hired as the first full-time evangelist of the new Youth for Christ International (YFCI). He preached throughout the United States and in Europe in the immediate post-war era, emerging as a rising young evangelist.

3. When he first began to receive national attention in the early 1950s, Graham had not publicly displayed opposition to racial segregation.  But in 1953 he tore down the ropes that organizers had erected to separate the audience into racial sections. Although he would later allow segregated seating at other crusades, he became increasingly opposed to segregation and racism. In 1955, Graham invited Martin Luther King Jr. to join him in the pulpit at his 16-week revival in New York City, where 2.3 million gathered at Madison Square Garden, Yankee Stadium, and Times Square to hear them. In his autobiography, Graham says he and King developed a close friendship and that he was eventually one of the few people who referred to King as “Mike,” a nickname that King asked only his closest friends to call him. In 1963, Graham posted bail for King to be released from jail during the civil rights protests in Birmingham.

4. Graham was often referred to as the “pastor to the presidents” because he had a relationship or personal audience with every U.S. president from Truman to Obama. He was particularly close with Eisenhower, who asked for Graham while on his deathbed, and Nixon. He presided over the graveside services for president Lyndon Johnson in 1973 and spoke at the funeral of president Richard Nixon in 1994. The only president that didn’t like Graham, as the evangelist frequently noted, was Truman. Truman called Graham a “counterfeit” and said “he was never a friend of mine when I was President.”

5. In 2001, a committee of historians, journalists, and public intellectuals ranked Graham as the fourth most influential Southerner of the 20th century behind Martin Luther King Jr., William Faulkner, and Elvis Presley.  Between 1955 and 2006, Graham won a spot on the Gallup Organization’s roster of ‘Ten Most Admired Men’ 55 times (including 49 consecutive years), trumping his closest rivals, President Ronald Reagan and Pope John Paul II, who appeared 31 and 27 times.