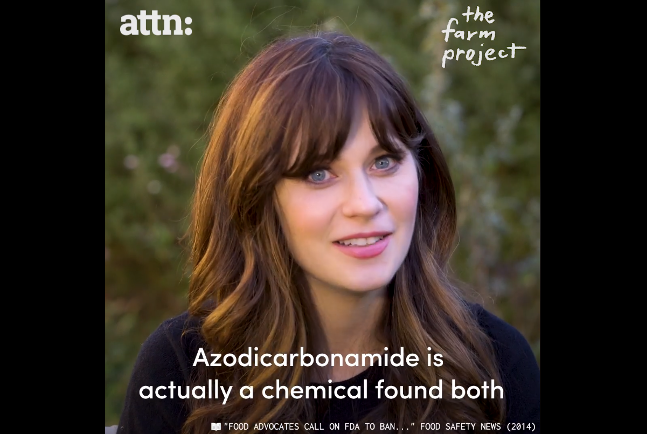 Hollywood actors and actresses play many roles on-screen, but apparently some of them believe they are Jacks-of-all-trades in the real world as well. They believe they can be UN Ambassadors, immunologists, and also food scientists. But just as you shouldn’t go to Angelina Jolie for advice about international diplomacy or to Jenny McCarthy for information about vaccines, so, too, don’t look to Zooey Deschanel for opinions about food science and safety.

Deschanel has launched a new web series on Facebook with Attn called The Farm Project, which claims to be about food; what it mainly seems to be about is the magic of vegan food, our societal obsession with plastic, and chemicals in our food. Taking a page out of Gwyneth Paltrow’s “Goop” handbook, Deschanel reveals a tenuous grasp of the highly scientific field of food science in her posts. Most Americans, unfortunately, are susceptible to the fake science peddled by celebrities, as evidenced by the fact that Deschanel’s chemicals video already has over seven million views on Facebook.

Of the videos posted on The Farm Project, the one called, “The only thing stopping corporations from putting sketchy chemicals in our food is the honor system,” is particularly galling in its anti-science fear-mongering. At one point during the video, Deschanel rattles off a list of chemicals with long-sounding, scary names and jokes, “No, these aren’t spells you’d learn at Hogwarts.”

This is a classic technique of those who are too ill-informed to understand the chemistry behind food science, but not smart enough to realize it. One of Deschanel’s supposedly scariest claims was this: “Processed foods in America contains chemicals that are banned in Europe. You might assume that the government oversees everything we can buy in the grocery store and makes sure they’re safe. But you’d be wrong. The only thing stopping big corporations from putting sketchy chemicals in our food is the honor system.” Unlike Deschanel, I spoke to an actual food scientist, Linda Minkow, a Senior Scientific and Regulatory Affairs Manager at a major food company, who told me, “GRAS stands for generally recognized as safe. Companies convene a panel of recognized experts in chemistry and toxicology, who evaluate the published literature on the proposed food additive. Even if a GRAS assessment isn’t submitted to the FDA (also known as a self-assessment), the FDA can show up at the company’s door and demand to see it at any time.”

Another fantastic claim of Deschanel’s was this: “Sodium nitrite… as I like to call it ‘science salt.’ It’s found in hamburgers and hot dogs and according to the International Agency for Research on Cancer, it’s probably cancer-causing to humans.” Here is an unfortunate newsflash for Deschanel and her fans: Everything is probably cancer-causing to humans. Minkow told me, “And you know what IARC classifies as a known carcinogen, not just a probable one? Alcohol.”

Deschanel goes on to explain how one chemical can be found in both sandwich bread and yoga mats. Minkow, an actual scientist, explains, “just because a chemical is used in something OTHER than food, doesn’t mean it’s not safe for human consumption. Pickle brine and beet juice are used to pretreat roads before snowstorms. Vinegar is used in many homemade cleaning solutions and weed killers.” Think about high school chemistry for a moment: how often were some elements used in vastly different compounds? Oxygen is part of both the air you breathe and the water you drink.

The Farm Project hits a few bulls-eyes for liberal activists: a total misrepresentation and misunderstanding of science (of the food variety), and a strong distrust of government agencies (notably the Food and Drug Administration). What is most perplexing about this phenomenon is how eager these same individuals are to accuse conservatives of exactly the same offenses on other issues, like climate science.

What, exactly, is the goal of Deschanel’s fear-mongering? At the video’s close, Deschanel implores viewers to “Share this video if you think we have a right to know what corporations are putting in our food.” It’s not a push to force the FDA or food companies to adopt standards; those already exist. It’s instead yet another avenue to attack “big corporations”—a vague but easy target for pampered Hollywood celebrities, perhaps, but not a rational way to do anything useful to improve what Americans eat.