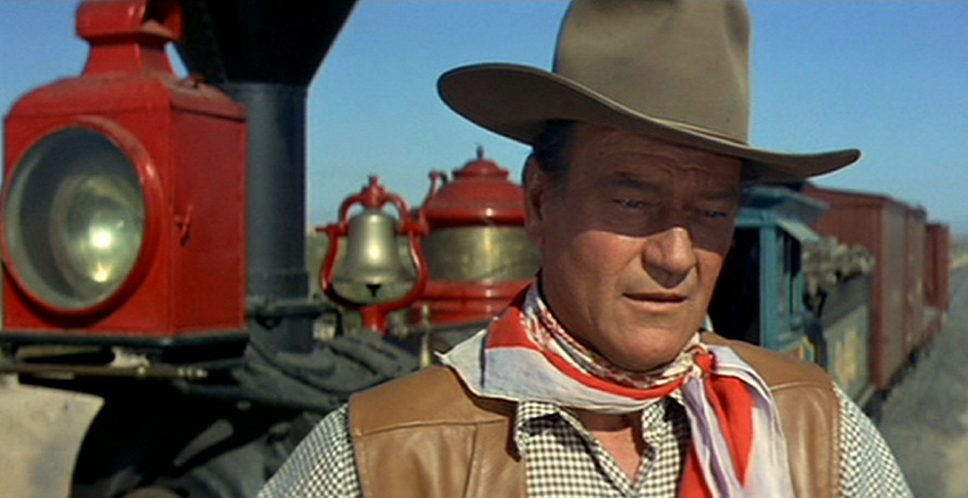 There is perhaps no manlier icon in Hollywood history than John Wayne. More than 40 years after his last film, he remains the cinematic apotheosis of the rugged, principled, red-blooded, tough-as-nails, frontier-conquering, patriotic American male. Not even Steve McQueen or Clint Eastwood can measure up to The Duke. But was Wayne’s masculine image a sham, and even worse, an ideal that no man could ever live up to?

The Atlantic’s Stephen Metcalf would like you to think so. In his recent “How John Wayne Became a Hollow Masculine Icon,” Metcalf writes about Nancy Schoenberger’s book, Wayne and Ford: The Films, the Friendship, and the Forging of an American Hero, which explores the creative partnership of John Wayne and director John Ford. The dynamic duo made 23 pictures together, including Stagecoach (1939), The Searchers (1956), and The Man Who Shot Liberty Valance (1962), which Metcalf concedes are among the best and most important Hollywood films ever made.

Schoenberger, an English professor at William & Mary, wrote “the two men succeeded in defining an ideal of American masculinity that dominated for nearly half a century.” She argues that that masculine ideal “is still salvageable, honorable even,” writes Metcalf. “Stoic, humble, gallant, self-sufficient, loyal—put that way, who could disagree?”

Stephen Metcalf, that’s who. He claims that the oversensitive Ford, whom he implies was gay, “was terrified of his own feminine side, so he foisted a longed-for masculinity” on a supposedly reluctant Wayne, molding his hypermasculine image. Rather than be inspired by that image, Metcalf dismisses it contemptuously: “[M]asculinity (like the Western) is a by-product of nostalgia, a maudlin elegy for something that never existed—or worse, a masquerade that allows no man, not even John Wayne, to be comfortable in his own skin.”

It’s all the rage in our gender-confused time to present The Duke’s brand of traditional masculinity—stoic, humble, gallant, self-sufficient, loyal—as something false and corrosive. This toxic, culturally-constructed mask must be deconstructed, the argument goes, so that men may be free to express their true selves and be more like, well, stereotypical women: vulnerable rather than violent, emotionally expressive rather than stoically strong, cooperative and nurturing rather than competitive and adventurous. Metcalf blames John Wayne in particular for helping create that mask which has supposedly suffocated countless men ever since—Wayne included.

Metcalf declares that Ford turned Wayne into “a paragon no man could live up to.” But this is just pure cynicism on Metcalf’s part. Men in all places and times have shown, and continue to show, their capacity for being stellar examples of manhood. No man, however, is perfect, but that is no reason to invalidate the ideal. An ideal is by definition the highest possible standard, something to strive for but not necessarily attain. When a man strives but falls short, it does not discredit either him or the ideal.

Masculinity, or at least moral masculinity, is not a status you achieve and then cannot be deprived of, like academic tenure. Being a good man is a process that men must renew each day, an ideal that men must pursue; and like all ideals, sometimes we fall short of it because we are human, because the default state of humanity is moral weakness, selfishness, and sloth.

It wasn’t enough for Metcalf, a former speechwriter for Hillary Clinton and a contributor to the left-leaning outlets Slate and The Nation, to dismiss Wayne as a symbol of masculinity; he had to attack Wayne as a symbol of political conservatism as well. He complains that the actor was an ultra-patriotic, “unyielding anticommunist”—as if there were something wrong with that:

He was the apotheosis of a Cold War type—unsentimental, hard, brutal if necessary, proudly anachronistic, a rebuke to the softness of postwar affluence. He was turning, in other words, from an artist into a political symbol.

Would Metcalf have complained if Wayne’s politics were more aligned with his own? If he were a symbol of Progressive, anti-anti-Communism? If he were less of a rugged individual and more of a pro-state collectivist?

Metcalf is contemptuous of the men who admired, and still admire, the “proudly anachronistic”—i.e. traditionally masculine—Wayne: “To the extent that any actor becomes an icon, he is bigger than his role, and John Wayne the icon has always appealed to men who are smaller than they think they deserve to be.”

Wow. What an insulting generalization. I suspect Wayne makes Metcalf feel smaller than he thinks he deserves to be. The truth is that John Wayne the icon has always appealed to men who want to be better than they are, or manlier than the modern world often gives them the opportunity to be.

Wayne and Ford author Nancy Schoenberger was right: the masculine ideal John Wayne represented “is still salvageable, honorable even.” Regardless of how Wayne’s image may or may not have differed from the man (and only Wayne himself could ever know the truth about that), the ideal he represents is still valuable. Especially today, when traditional manhood is so often decried as “toxic,” men need symbols of moral masculinity to inspire them to be better men. As much as he might sneer at that, Stephen Metcalf will never be big enough to diminish The Duke.