We Live in an Era of Mass Delusion 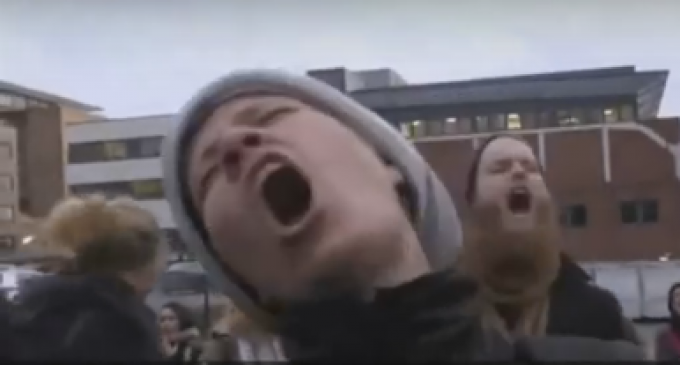 Do you recall the story of the emperor who had no clothes? If so, then you will remember that a couple of swindlers entered the kingdom and then conned not only the emperor, but all of those around him into believing that the clothes they sewed for the emperor were the very best in the world.

The problem was that no one could see the clothing. When asked about the invisible clothing, the deceivers claimed that the reason no one could see the clothing was because it was the rarest of all clothes and no one had ever seen such luxurious cloth. Shockingly, the emperor swallowed the lie — hook, line, and sinker. All of his subordinates and subjects naturally followed the emperor’s lead and declared that the clothing was of the highest quality and beauty of any clothing that they had ever seen.

But there really wasn’t any clothing.

It was only during a parade showing off the emperor’s “new clothes” that a child pointed to the emperor and yelled, “He has no clothes! The emperor is naked.” With that innocent statement, reality was restored to the kingdom and the emperor was terribly shamed for being such a fool.

What does it mean for us today? Well, I’m guessing you have recently watched the news or sat in a classroom and it seemed like the person in authority was as delusional as the emperor. The authority figure, whether a professor or a talking head, refused to acknowledge reality even though it was right in front of them.

If you have had such an experience, you’re not alone.

Quite often we see individuals in authority giving themselves over to an ideology, often wrapped up in the quest for total equality, and attempting to force the world to conform to it. They then recruit students and others to agree with them, just like the emperor and his subordinates. And when the world doesn’t do as the ideologues want, they simply ignore reality and declare that what they “see” is reality.

When you disagree with them, though, you find yourself shouted down, accosted, or simply pushed to the hinterland of societal acceptance. You wonder if you’re delusional because you can’t see the emperor’s clothes or if the people around you are delusional because they refuse to see the reality you see.

In The Rape of the Mind, Joost Meerloo makes the point that there are times of mass delusion and that they often become totalitarian. One wonders if we are in an era of mass delusion. But how can we confirm it? To start, Meerloo gives us a reasonable description of delusion:

“In our era of warring ideologies, in a time of battle for man’s mind, this question demands attention. What is mass delusion? How does it arise? What can we do to combat it?

…When we tentatively define delusion as the loss of an independent, verifiable reality, with a consequent relapse into a more primitive state of awareness, we can see how the phenomenon of totalitarianism itself can be considered delusional.”

The loss of independent, verifiable reality is certainly something we’re grappling with throughout America, but especially in higher education and media. Western Civilization rests on the belief that there is an objective reality that can be discerned through reason by any man. In other words, our reality is an ordered world governed by certain discoverable rules and truths.

We would not have the scientific method or even science if that was not the case. Indeed, if my reality is completely different than your reality than there would be sheer chaos, a world that had no rules. Or there is no reality other than mine, in which case you don’t really exist. Or maybe I don’t exist and your reality is the only one that is real. Can you see how the rejection of an objective, ordered reality becomes delusional thinking?

Either we live in a world with a discernable, objective reality or each of us lives in a dream world and there is absolutely no objective reality. The latter sounds a little crazy and hurts the brain to ponder. It’s well beyond Inception-thinking.

Meerloo continues his observations about delusion by pointing out that an individual may be delusional as the result of mental illness, but that there can also be mass delusion instilled into the population. Here’s how it works:

“If one can isolate the mass, allow no free thinking, no free exchange, no outside corrective, and can hypnotize the group daily with noises, with press and radio and television, with fear and pseudo-enthusiasms, any delusion can be instilled. People will begin to accept the most primitive and inappropriate acts.”

When we consider the incredible changes taking place in our society and culture, coupled with the demands that contrarian voices be silenced — especially on college campus — we are right to worry that in our socially networked, always-connected world we have likely entered an era of mass delusion. Unfortunately, once mass delusion sets in Meerloo warns that it is quite hard to eradicate.

“Delusions, carefully implanted, are difficult to correct. Reasoning no longer has value; for the lower, more animal type of thinking becomes deaf to any thought on a higher level. If one reasons with a totalitarian who has been impregnated with official clichés, he will sooner or later withdraw into his fortress of collective totalitarian thinking. The mass delusion that gives him his feelings of belonging, of greatness, of omnipotence, is dearer to him than his personal awareness and understanding.”

When you read that paragraph, is there a particular movement that comes to mind? Is it fair to see similar behavior amongst some of the more strident “social justice warriors” who demand that you agree with them and refuse to allow the free exchange of ideas on college campuses?

Consider his description of the delusional totalitarian and the intelligentsia in higher education:

“One of the most coercive delusions is the explanation delusion, the need to explain and interpret everything because the person has a simple ideology in his pocket … The quack, for instance, with his gesture of omniscience pushes his victim into a kind of nothingness so that he feels himself become smaller and smaller in relation to the great mysteries of the world. It is this compulsive need to be the wise guy and the magician who knows all the answers that we so often find in the totalitarian world…

It is among the intelligentsia, and especially among those who like to play with thoughts and concepts without really taking part in the cultural endeavors of their epoch, that we often find the glib compulsion to explain everything and to understand nothing. Their retreat into intellectual isolation and ivory-tower philosophy is a source of much hostility and suspicion from those who receive the stones of intellectualism instead of the bread of understanding.”

How much of the cultural upheaval we’ve seen in the last decade emanated from America’s colleges and universities? Did the intelligentsia initiate a generation or two of Americans into a worldview that rejects the West’s traditional understanding of the world and an objective reality?

The warnings are clear that mass delusion can be instilled in a population if like-minded ideologues control education, media, and entertainment. While Meerloo believes it is difficult to eradicate mass delusion once it spreads throughout a population, he does give some ideas for how the individual can fight it.

“We cannot prevent one mental contagion through enforcing another. The only way we can give man the strength to withstand mental infection is through giving him the utmost freedom in the exchange of ideas. People have to learn to ask questions without demanding that they be answered immediately. The free man is the man who learns to live with problems in the hope that they will be solved sometime — either in his own generation or the next. Man’s curiosity and inquisitiveness have to be stimulated.

We have to fight man’s growing fear of thinking for himself, of being original, and of being willing to fight for what he believes in. On the other hand, we also have to learn to resist ideas. Governments may be overthrown not only by physical violence, but also by mental violence, by suggestive and menticidal penetration of young minds, by rigid conditioning, regimentation, and prohibition of dissent.”

Quite often we hear that we are free because of our troops. In a few cases that is true, but ultimately your freedom rests with you. Are you willing to dissent? Are you willing to call out the mass delusion that seems to be spreading throughout our culture? This fight for our culture and country rests on all of our shoulders. Remember, courage isn’t the lack of fear. Rather, it is doing what is right despite your fear.