One of the anomalies of the 2016 presidential election was the fact that an old white guy from Vermont was able to captivate a diverse audience of young millennials.

The most obvious reason for Bernie Sanders’s popularity was his advocacy for free, government-funded college. With higher education costs multiplying at a rapid rate and college looking less feasible because of these, it is easy to understand how millennials would welcome help to increase their prospects.

But free college doesn’t appear to increase the prospects of young people as much as we’ve thought; in fact, it may actually diminish their chance at future success. This revelation was recently uncovered in an National Bureau of Economic Research paper on England’s experience with free college.

According to researchers, England’s population enjoyed a period of free college until the late 1990s. Over time, however, this setup caused quality to decline and socioeconomic inequality to rise.

Sensing a problem, the English college system changed course and began slowly requiring students to pay for more of the costs, most notably through loans which they would pay back once they began their careers. Preston Cooper summarizes the results in a column for Forbes:

“Twenty years later, the reforms look like a success. Higher education funding per student climbed back up after the end of free college, since universities could now lean on tuition fees for revenue instead of just taxpayers (see chart). But higher prices did not reduce access: enrollments climbed after the end of free college, and enrollment gaps between rich and poor students narrowed. Due to tuition revenue, universities could serve more students who wanted degrees, and in 2015 the government was finally able to abolish all caps on enrollment of domestic students.” 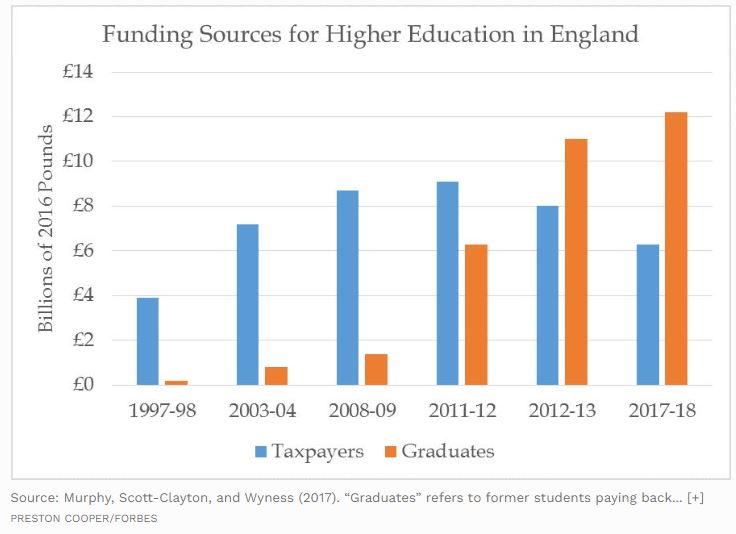 Commenting on this phenomenon, Cooper notes:

In pondering such a statement I couldn’t help but wonder if such could be the case not only in higher education, but in K-12 schooling as well.

We’ve had publicly-funded K-12 schooling so long that we can’t think imagine anything different. After all, who would build the schools? Who would pay for tuition and books and teachers and any number of other things if the government didn’t fork out tax-payer dollars to do so?

But what we forget is the fact that publicly-funded education was not the long-term plan of the American Founders. Thomas Jefferson advocated for publicly-funded schooling, but only for the first three years of a student’s education. While Jefferson strongly encouraged education beyond this three-year period, he also stipulated that it was to be funded by a student’s parents, not the state. Those who didn’t have the financial resources, but proved themselves exemplary scholars, would be entitled to a type of scholarship to advance in learning. And the students of that era seem to be none the worse for wear, either, as estimated literacy rates for the colonial period are quite high.

What if we were to return to a similar plan? It seems blasphemy to suggest it, but let’s face it, the government has been footing the bill for schooling for years and our students don’t seem to be any better for it. In fact, inequities just seem to increase and education quality continues to decline.

Is it possible that we would see education quality and inequities improve if more responsibility for a child’s education was placed upon parents? Would education in America collapse if government funding became non-existent, or would it actually get better? And would our students thrive if they weren’t subjected to the latest educational whims of politicians every few years?

These are difficult questions to ask, but ones we should examine if we’re truly serious about fixing our broken education system.