Mussolini’s Description of Fascism Sounds a Lot Like Antifa

One of the fascinating things about the chaotic culture on America’s college campuses is the unlikely bedfellows it is producing. Particularly striking are the liberal professors who are speaking out against students agitating for the adoption of illiberal policies, such as political censorship and safe spaces, which curtail free speech. These liberal professors include Erika Cristakis and Allison Stanger.

Another famous example is Bret Weinstein of Evergreen State College. Although an out-spoken liberal, Weinstein and his wife, fellow Evergreen State professor Heather Heying, have been driven from the campus because of their refusal to bow to the concept of equity.

Heying recounts this incident in a recent Wall Street Journal article, making some astute observations. According to Heying, the left is going after science professors like herself and her husband for a very specific reason: objective truth. Heying explains:

“The battle on our campuses—and ever more, in K-12 schools, in cubicles and in meetings, and on the streets—is being framed as a battle for equity, but that’s a false front. True, there are real grievances. Gaps between populations exist, for historical and modern reasons that are neither honorable nor acceptable, and they must be addressed. But what is going on at institutions across the country is—yes—a culture war between science and postmodernism. The extreme left has embraced a facile fiction.

Postmodernism, and specifically its offspring, critical race theory, have abandoned rigor and replaced it with “lived experience” as the primary source of knowledge. Little credence is given to the idea of objective reality. Science has long understood that observation can never be perfectly objective, but it also provides the ultimate tool kit with which to distinguish signal from noise—and from bias. Scientists generate complete lists of alternative hypotheses, with testable predictions, and we try to falsify our own cherished ideas.”

Heying’s article bears the headline, “First, They Came for the Biologists,” a reference to the following quote by Martin Niemöller about the Holocaust: 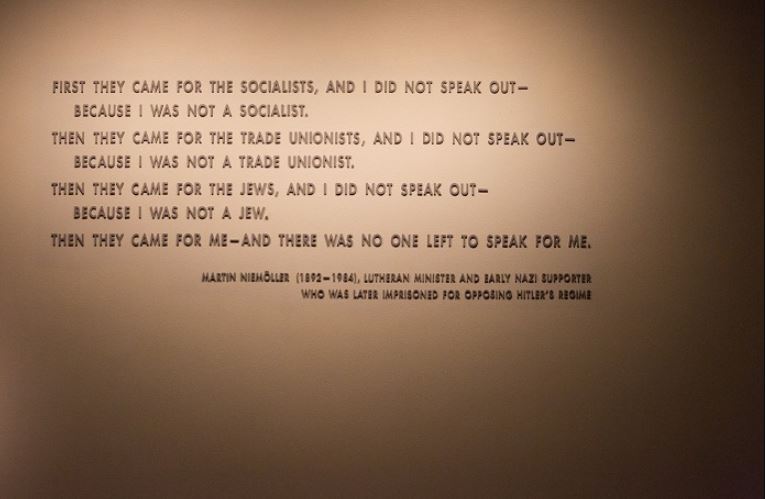 This reference to the Holocaust is ironic since many on college campuses label themselves Antifa in an attempt to demonstrate opposition to the fascists which permeated the Nazis and their allies in the 1940s.

If you believe such a comparison is unfair, consider how one of the leading fascists of the World War II-era, Benito Mussolini, described the fascist mentality. He said:

“Everything I have said and done in these last years is relativism by intuition. If relativism signifies contempt for fixed categories and those who claim to be the bearers of objective immortal truth … then there is nothing more relativistic than Fascist attitudes and activity… From the fact that all ideologies are of equal value, that all ideologies are mere fictions, the modern relativist infers that everybody has the right to create for himself his own ideology and to attempt to enforce it with all the energy of which he is capable.”

That description sounds an awful lot like the mentality which permeates today’s campuses and is driving both conservative and liberal professors away. Which should lead us to wonder: Is the modern Antifa fight against fascism actually fighting for fascism without realizing it?