Alejandro Villanueva is the New Face of Civil Disobedience 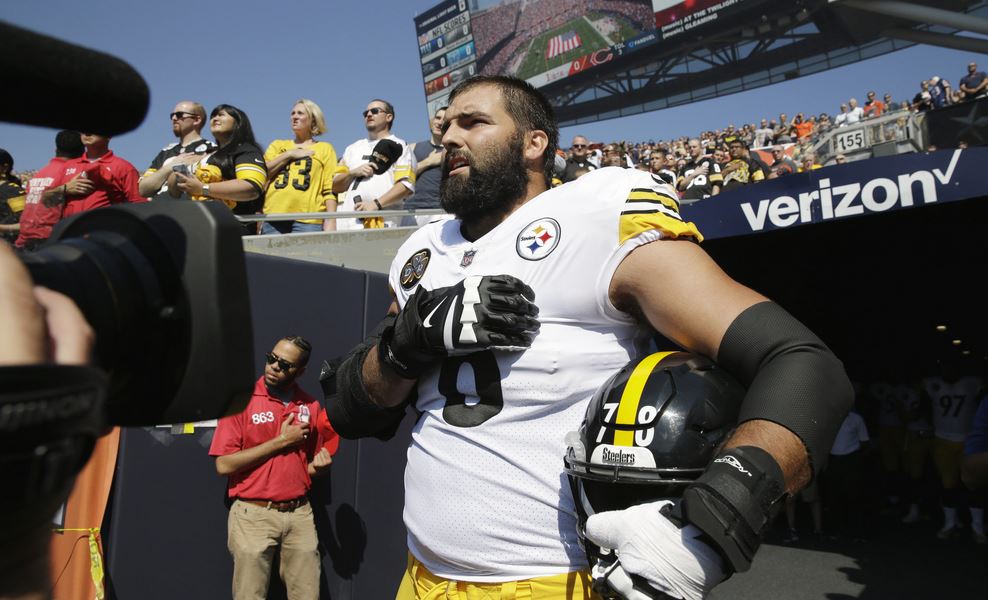 As of Monday morning, Alejandro Villanueva’s NFL Jersey was the hottest thing in pro football sportswear. The former U.S. Army Ranger broke with the rest of his team Sunday, came out of the tunnel, and participated in the National Anthem ceremony.

But while his owner, coach and team were apparently none too happy, Americans themselves were voting with their credit cards. Villanueva’s jersey is now the top seller at the online NFL Shop. Click on the site and see which jersey comes up first.

The NFL, through many of its coaches (mostly White) and most notably its (very White) Commissioner Roger Goodell, has doubled down on support of African-American player protests. That should come to Americans as no shock, since self-congratulation and moral preening are now the fashions of the hour, particularly among those in society (sports league presidents, people rich enough to own sports teams, and players many of who enjoy multi-million dollar contracts) who enjoy the most privilege.

One wonders what is the average salary of players taking the knee.

And in a league in which African Americans make up the majority of players and Latinos something less than 4 percent, why were the African-American players boycotting the pledge, and (if we can go by the name alone) the one single, solitary, only, sole, lonesome Latino on the team at the end of the tunnel putting his hand over his heart?

In fact, what the heck is a Latino doing on a pro football team at all? Something between 68 and 75 percent of NFL players are African-American, a level of racial inequality that, if it were enjoyed by any other racial group, would itself be a scandal? In a league in which Black players predominate, it was the one player in the extreme minority who was thankful for what he had.

“…most of America, to the extent it still watches, now sees Sunday afternoon pop demonstrations as increasingly a farce, played out among players who appear neither exploited nor as exemplary model sportsmen, but rather as overpaid and pampered.”

And not just that. Say’s Hansen:

“Nor do the protesting players come across as informed, brave social-justice warriors on the barricades of dissent, but as mostly unable to explain to their fans precisely why and how they are mistreated or why America is a flawed society that does not deserve momentary iconic respect each week. If players were concerned about violence and injustice, why not collect a voluntary 10 percent contribution from the league’s multimillionaire players and use it to fund programs that address systematic and lethal violence in inner-city communities such as Baltimore or Chicago? And if ethics and values are the players’ issues, why over the last decade has there been an increase in player off-field violence and arrests, often marked by well-publicized violence against women?”