Why are Children Learning to Adult from YouTube Stars? 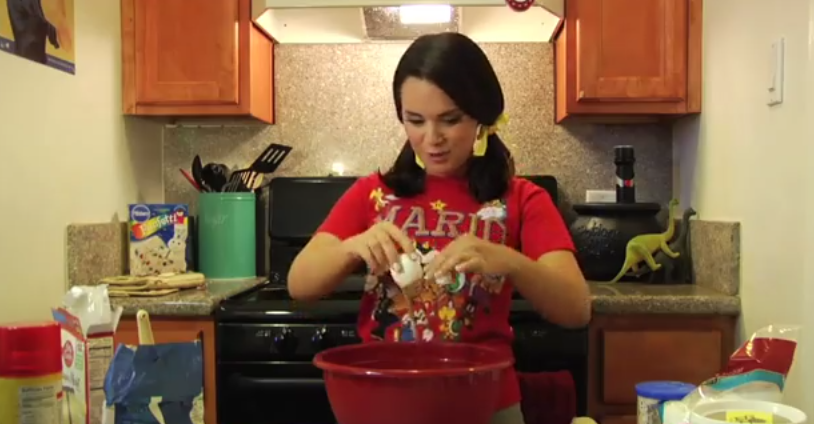 In a recent article for NPR, Neda Ulaby writes on the rise of YouTube cooking star Rosanna Pansino.

As NPR explains, Pansino is a young millennial who uses her YouTube channel, Nerdy Nummies, to teach viewers to make everything from individual potato cakes to treats based on video games or TV shows. In fact, what started as a simple way to get herself used to speaking in front of a camera (her first video is below) has now turned into a multi-million dollar business.

“‘My favorite episode is where she made a unicorn cake,’ says Sofia Roberts, 12, of Pasadena, Calif. Her best friend, Sofia Mathews, also 12, chimed in. ‘That one’s cool.’

The Sofias epitomize a certain kind of contemporary underage baker who loves Nerdy Nummies, Masterchef Junior and Tasty on BuzzFeed. They had just finished making four kinds of French macarons.”

NPR goes on to explain that even while YouTube doesn’t track children viewers, children like the aforementioned Sofia Mathews are lapping up Pansino’s cooking lessons:

“[Mathews] says YouTube’s do-it-yourself videos are perfect for kids figuring out how to make stuff. ‘You can tell if you’re doing it right because a person is actually doing it,’ she says.”

That testimony should give us pause. These children enjoy Pansino’s videos because she gives them a firsthand glimpse into her kitchen. They are not on their own, trying to figure out how to break an egg, or wondering how to grease a pan; instead, they have step by step guidance, almost as if a mother was looking over their shoulder and guiding them in the steps to becoming a decent cook.

Recent generations haven’t always had that personal cooking instruction, largely because both parents are pressured to enter the workforce. As a result, neither parent has much free time to hold down the home front and pass basic skills such as cooking on to their children.

Such a lifestyle, although thriving through the medium of convenience foods, seems to have resulted in some problems. According to a survey conducted several years ago in the U.K., a third of new high school graduates are clueless on how to boil an egg. The same study also found that one in five didn’t know how to make a simple food item such as toast. A different American survey from 2011 found that a full 28 percent of adults claimed they didn’t know how to cook.

It’s easy to complain these days about young people who don’t know how to act like adults. But we should ask ourselves if this predicament is arising because children haven’t had a lot of personal instruction with the adults in their lives. Can we really blame young adults for behaving like children if they’ve had few opportunities to be personally trained to cook or clean? And if children are not trained by their parents, will they increasingly turn to YouTube stars like Pansino to learn the information they need to succeed in life?