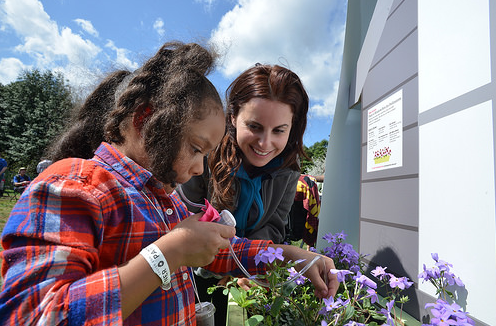 Like most children, I began my formal schooling at age five. At the same time, I also began learning in another, less formal school: the school of nature.

This less formal schooling commenced when my best friend gave me a small zucchini plant in a decorative tin mug. I planted it in a corner of my mom’s garden and watched it grow. In the years that followed, I learned many other things in that little school of nature known as a garden, including knowledge of plants and their individual care techniques and uses.

But while gardening teaches many practical skills about growing food, it also builds firsthand knowledge in the STEM or STEAM areas – Science, Technology, Engineering, Art, and Math.

So just how can a garden foster skills in the all-important STEAM subjects? Several instructors from Jackson Elementary School in Janesville, Wisconsin are trying it this summer and explain how:

“In the science category, students learn elements of basic botany and meteorology.

The technology aspect includes using laptops to record data and to create QR codes for the back of each plant marker. Cellphone users can scan a code to learn more about the variety of a certain plant and see some recipes.

Engineering involves problem-solving, such as figuring out how to keep the weed population under control. The answer: Use old newspapers as mulch.

Students create colorful signs for each row of plants—that counts as art.

For math, students calculate the perimeter of the field and perform other garden-related measurements.”

According to Jackson Elementary, the students love the opportunity to get outside and work with their hands. But while the learning is fun, it also is more natural to the child, and thus may help him retain what he learns much more easily. Turn of the 20th century British educator Charlotte Mason explains why:

“We older people, partly because of our maturer intellect, partly because of our defective education, get most of our knowledge through the medium of words. We set the child to learn in the same way, and find him dull and slow. Why? Because it is only with a few words in common use that he associates a definite meaning; all the rest are no more to him than the vocables of a foreign tongue. But set him face to face with a thing, and he is twenty times as quick as you are in knowledge about it; knowledge of things flies to the mind of a child as steel filings to magnet.”

In the more agrarian society of the past, it was commonplace for a child to be face to face with the things of nature even if he did spend a decent amount of time in a school classroom. Now, however, such an occurrence is almost non-existent. Is it possible that restoring such an experience would not only give children a boost in the STEAM arena, but would also reinvigorate the student thirst for knowledge and learning?