Does the Bern see his hypocrisy? 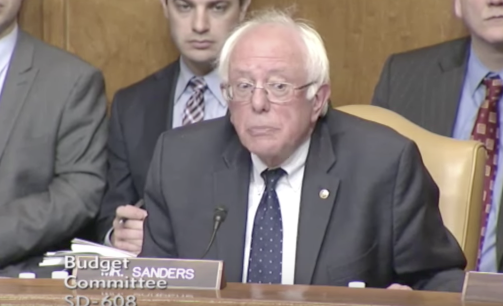 During a budget committee hearing for deputy director of the Office of Management and Budget nominee Russell Vought, Senator Bernie Sanders argued that a Christian’s beliefs are “not what this country is supposed to be about”. You can watch the back and forth between Vought and Sanders below.

Over at The Atlantic, Emma Green argues that Sen. Sanders came quite close to a religious test for holding office, something forbidden by the U.S. Constitution.

“Article VI of the U.S. Constitution states that ‘no religious test shall ever be required as a qualification to any office or public trust under the United States.’ On Wednesday, Senator Bernie Sanders flirted with the boundaries of this rule during a confirmation hearing for Russell Vought, President Trump’s nominee for deputy director of the Office of Management and Budget.”

As you saw in the video, Sen. Sanders took issue with an article written by Vought for Wheaton College in which he argued that Muslims stand condemned as they reject Jesus Christ as the Son of God. He is, presumably, a devout Christian and his position should surprise no one. When Vought wrote about condemnation, he is speaking about his beliefs about the hereafter, not in current life.

To our post-modern, relativistic sensibilities, condemning anyone because of their views seems quite harsh. There is a bit of irony, though, in secular relativism’s ability to condemn people for having firm beliefs. When Sen. Sanders concluded his remarks by stating “I would simply say, Mr. Chairman, that this nominee is really not someone who is what this country is supposed to be about. I will vote no.”, did he himself not condemn a man for his beliefs?

Emma Green picks up on this challenge for American society and politics, writing, “As the demands for tolerance become greater, the bounds of acceptance can also become tighter.” That is quite an insightful point if you dwell on it for a bit.

The recent cultural battles have been and will continue to be about differing worldviews contending for control of government. Unfortunately, it’s not that clear because we are operating under the false belief that ‘religion-free’ means ‘value-free’. If instead of focusing on the word religion, we focus on values (of citizens, government officials, and even corporations) we can have a much easier time understanding what is happening and, therefore, a better opportunity to pursue measures necessary to maintain a free and just society.

We often hear that an individual’s religious beliefs should stay out of government, some will go so far as to argue that an elected official voting based on his religious beliefs is a violation of the separation of church and state. But what if we swap out ‘religious beliefs’ and replace the phrase with the word ‘values’? If we demanded that no elected official act on his values, there would be no one in office or even capable of running. In fact, even our government wouldn’t exist as both the form of it (constitutional republic) and all its laws and actions are a reflection of values.

Simply put, there is no value-free or value-neutral government.

The very existence of government reflects the values (religious or not) held at the time it was established. We may not agree with the values behind a government or its laws, but that does not mean they do not exist. All elected officials make decisions based on their values, which they presumably expressed to the voters and the voters supported sufficiently to elect that person to office. Those who are agents of the government also carry their values into their work, though they are to understand that their job is to obey and execute the law. Judges, of course, are either elected or appointed. In either case, the judge makes decisions based on a mix of values and legal precedents.

In the case of Vought, Senator Sanders clearly carried his values with him as an elected official when he voted against a man who held contending values.

If we are to remain a truly tolerant country, we need to make peace with the reality that everyone carries their values, just like religious beliefs, into every sphere of their lives. We also need to seriously reconsider certain government policies.

In the name of tolerance and diversity, should a fitness place that practices yoga be forced to hire a Muslim who doesn’t believe in yoga? Of course not. Should a religious school be forced to hire individuals who subscribe to a different set of values than those of the school? No. Should a pro-gay marriage organization be forced to hire Muslims and Christians who fundamentally disagree with the mission? Absolutely not.

Even in the workplace the issue of values is coming to a head. If a company upholds tolerance as a value, even publicly supporting gay marriage, should it be free to hire only employees who agree with the company’s values? That’s happening already, the Wall Street giant Goldman Sachs is just one example. But what about the opposite happening? Should a company be free to align itself with Christian or Muslim values and only hire those who align with them? If you said yes to the first question, logically that means a yes for the latter.

In government we are going to have to work very hard to develop solutions for bringing together the increasingly diverse and contending values of Americans. We are also going to need to understand people’s values. Just because Vought’s faith is one in which a man is either saved or condemned, doesn’t mean that he won’t be able to do a good job of analyzing budgets and spending in the position of Deputy Director of the Office Management and Budget.

As stated above, government is a reflection of values. As such, the more government does, intruding into our lives whether at home, work, school, or place of worship, the more it creates tension and disharmony, particularly amongst minority groups. Government action is an imposition of certain values. We either will have to conform to the dominant values of the culture or find ways for government to reduce its various impositions. If we choose the latter, we are far more likely to maintain domestic harmony.

There is no way to avoid this situation. Over many decades the diversity of Americans has increased exponentially. With greater diversity of values, the harder it becomes to find unity in government. The exchange between Sen. Sanders and Russell Vought is just the beginning.