What’s So Wrong with Melania Trump Dressing Like a Lady? 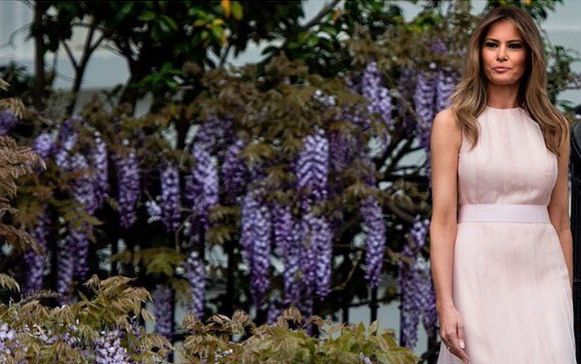 Earlier this week, the Trump administration hosted its first Easter Egg Roll at the White House. But while Melania Trump’s subtle reminder for the President to place his hand over his heart garnered most of the attention, the New York Times fashion writer appeared to be more interested in Melania’s wardrobe selection:

“A spun-sugar pink midcalf sleeveless layered organza confection by Hervé Pierre, the designer who created Mrs. Trump’s inaugural ball gown, it was made according to her instructions, Mr. Pierre said. And though it looked as classic as an Easter dress could be, it was actually something of a break with tradition, at least from recent administrations.

In what way? You might ask. It looked like a throwback to the days of ‘Easter Parade.’ Well, yes. In exactly that way.”

As columnist Vanessa Friedman goes on to explain, such a wardrobe choice bucks recent fashion choices by first ladies at the Easter Egg Roll:

“Since the Easter Egg Roll was revived under Betty Ford, most of the first ladies who have hosted the event wore suits, or at least jackets, suggesting it was a professional commitment. Hillary Clinton displayed her penchant for rainbow-colored pantsuits when she was host, resplendent one year in buttercup yellow, another in grass green. When the Obamas were in the White House, they significantly relaxed the rules, the president often going without a tie or jacket, and Michelle Obama most often in pants with a J. Crew T-shirt or cardigan and Converse (one Tracy Reese floral dress excepted). The message was one of a new, more relaxed, modern and active era.”

Friedman goes on to imply that Melania’s very feminine and ladylike outfit is a blast from the past. Judging from Friedman’s tone, those who seek to buck modern trends and pursue clothing that is both gender specific and formal are out of touch.

Such an attitude is similar to the one which erupted when President Trump suggested that females working in the White House “dress like women.” In a democratic culture which values equality above all else, the idea that clothing should delineate the differences between the sexes is anathema.

The fact is, women are free to wear anything they want these days. But I can’t help but wonder: Do many women deny themselves the respect they are craving by the way they dress? Is it possible that women who embrace their femininity and are unashamed to dress in a respectable, gender-specific way, such as Melania Trump exhibited the other day, are actually ahead of the pack when it comes to earning that respect?