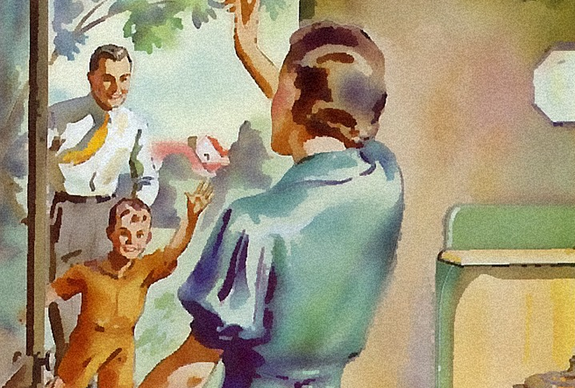 Several months ago, I went out on a limb and asked a question which is rather taboo in our gender egalitarian society: “Do Men Secretly Want Stay-at-Home Wives?”

To my surprise, many readers declared that such a supposition was completely right – only there was nothing secret about it.

As it turns out, the experiences and opinions of Intellectual Takeout readers were right on track, as a New York Times article by Stephanie Coontz confirmed over the weekend.

According to Coontz, the mid-nineties saw rising support for sending both spouses into the workplace. That support has cooled significantly in more recent years among men:

“In 1994, 83 percent of young men rejected the superiority of the male-breadwinner family. By 2014, that had fallen to 55 percent. Women’s disagreement fell far less, from 85 percent in 1994 to 72 percent in 2014. Since 1994, young women’s confidence that employed women are just as good mothers as stay-at-home moms has continued to inch up, but young men’s has fallen. In fact, by 2014, men aged 18 to 25 were more traditional than their elders.”

Coontz goes on to say:

“Are we facing a stall or even a turnaround in the movement toward gender equality? That’s a possibility…. But there is considerable evidence that the decline in support for ‘nontraditional’ domestic arrangements stems from young people witnessing the difficulties experienced by parents in two-earner families.”

As Coontz continues, it becomes clear that she is not a fan of this trend. She implies it needs to be countered by offering policies such as government-sponsored childcare and paid-family leave, as many European countries do. Only then, Coontz implies, will we be able to make progress in the area of gender equality and happier families.

But such implications recall to mind what C.S. Lewis once said about progress:

“We all want progress. But progress means getting nearer to the place where you want to be. And if you have taken a wrong turning, then to go forward does not get you any nearer. If you are on the wrong road, progress means doing an about-turn and walking back to the right road; and in that case the man who turns back soonest is the most progressive man. … There is nothing progressive about being pig-headed and refusing to admit a mistake.”

It’s easy to point fingers at the men who say they would like a stay-at-home wife as sexist, patriarchal individuals who want to oppress the female sex.

But is the opposite actually the truth? Have these men, who grew up in the unsettling environment where both parents were frazzled and maxed-out trying to balance work and family life, recognized that such an arrangement is not as beneficial as it was made out to be? Are men who seek stay-at-home wives the true progressives because they recognize past mistakes and are seeking to rectify them instead of charging forward in the name of gender equality?