Does Free Trade Lead to Freedom? 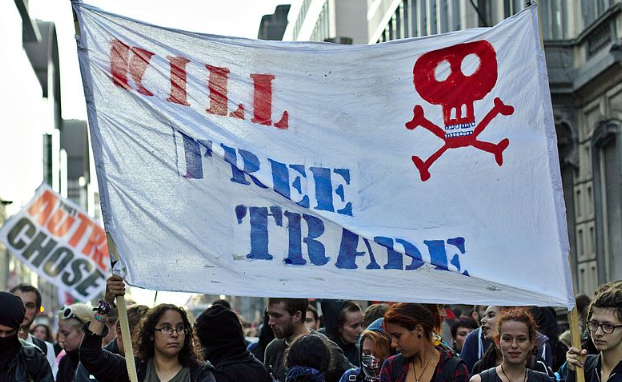 I recently received an e-mail from a student who was confused by the discussion in a history class of the expansion of trade in the wake of the Industrial Revolution. The class had discussed the colonial age and the emergence of mercantilism. Appropriately enough, the history professor had discussed The Wealth of Nations by Adam Smith.  The student concluded from the class discussion that globalization, in the sense of countries trading with each other, is “a good and normal thing”.

I agreed, of course, that trade between nations was “a good and normal thing” and that it was entirely appropriate that the class should have discussed Adam Smith’s Wealth of Nations, a hugely important book, which has been pivotal in shaping economic thought. The problem is that Smith was an economist and not a prophet. He did not and could not see the degree to which international trade would come to dominate the politics as well as the economics of the world.

The growth of trade accelerated in the wake of the Industrial Revolution. Britain, in which the revolution was born, had the advantage of a head start. The result was a burgeoning British Empire which, by the end of the nineteenth century, extended to almost a third of the land area of the world. The Empire arose from a combination of Mercantilism, e.g. the East India Company (possibly the first global corporation), and military muscle, e.g. the indomitable Royal Navy. Adam Smith was, therefore, naïve if he thought that “free trade” (which is never free because it’s always subject to realpolitik) would bring peace between nations. It merely allowed the strongest nations to become imperial powers, dominating smaller ones, the embryonic beginnings of the globalism that we see in place today.

None of the foregoing presupposes that trade between nations is bad. Of course it isn’t. Trade between nations is good, as trade between people is good. It is, however, not an absolute good in itself; it’s only good insofar as it serves the common good (solidarity) and doesn’t harm the health of the family as the fundamental unit of all healthy societies (subsidiarity). If these are harmed by what might be called the wrong sort of trade, the problems associated with harmful trade need to be addressed; hence contemporary criticism of economic globalization and the political globalism which it leads to.

And this brings us to one of the axiomatic issues at the heart of contemporary politics and economics, which is the inextricable connection between globalization and globalism. The former is the economic process of global economic integration and its cultural and political ramifications; the latter is the political philosophy that believes that such a process is a good thing. Globalists advocate and work towards ever increasing globalization and towards global political as well as economic integration. They are the imperialists of the twenty-first century, as the British were the imperialists of the nineteenth century.

Those who value small, local government over a future World Government and who want to see thriving local economies, rather than economies dominated by global corporations, cannot believe the lie that so-called “free” trade can ever lead to freedom.

Let’s end as we began with the words of G. K. Chesterton, who encapsulated the philosophical heart of a problem that Adam Smith never grasped:

I am certain that nothing solid can be built … upon the utterly unphilosophical philosophy of blind buying and selling; of bullying people into purchasing what they do not want; of making it badly so that they may break it and imagine they want it again; of keeping rubbish in rapid circulation like a dust-storm in a desert; and pretending that you are teaching men to hope, because you do not leave them one intelligent instant in which to despair.