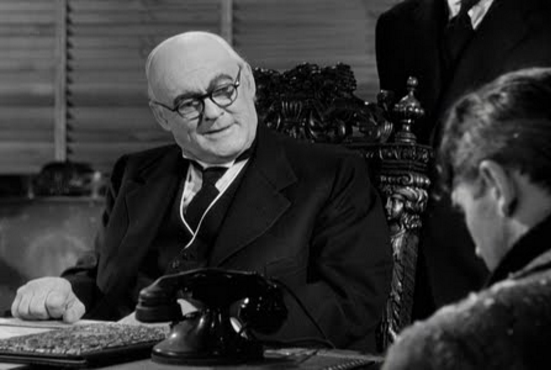 December is upon us and that means plentiful opportunities to watch the enduring classic, It’s a Wonderful Life. Unfortunately, the overwhelming majority of viewers completely misinterpret Frank Capra’s dystopian nightmare as a heartwarming Christmas tale.

The emotional appeal of angels getting their wings is undeniable. Crying out for correction, however, are the vicious slanders regarding the film’s real hero, Henry Potter.

We first hear of Potter from George Bailey’s father, Peter Bailey, who badmouths Potter with the usual falsehoods about businessmen. But during Bailey’s envious rant, we learn something important: Henry Potter is a board member of the building and loan. We later learn Potter is, in fact, a stockholder.

That puts a somewhat different light on his subsequent motion to liquidate the business upon Peter Bailey’s death. Yes, we hear George Bailey repeating the familiar socialist tropes his father did: that Potter only wants to close the building and loan because he “can’t get his hands on it” and considers the little people cattle, etc.

But Potter responds with some rather inconvenient facts: the building and loan has been making bad business decisions, providing what we’d now call subprime loans to people who can’t pay them back.

We don’t know how Potter became a stockholder, but the Bailey Building and Loan does not appear to be a publicly traded company. The most likely explanation is Peter Bailey asked Potter for capital, just as George Bailey does later in the film, in between rounds of disparaging Potter as a greedy capitalist. That would be perfectly consistent with today’s “progressives,” who rail against capitalists out of one side of their mouths while sucking up to them for money out of the other.

But regardless of how Potter became a stockholder, Peter Bailey has a fiduciary duty to him to run the business for maximum profit, providing Potter and the other stockholders a return on their investments, something George Bailey confirms they never intended to do. Instead, the Baileys squander their investors’ money on a do-gooder, subprime loan scheme to make everyone a homeowner. It worked out in fictional Bedford Falls about as well as it did in early 2000s America.

Meanwhile, the Baileys constantly slander Potter’s rental houses as “overpriced slums.” These are the same Baileys whose housing opportunities are more expensive than Potter’s.

Their accusations constantly beg the question: If Potter’s houses are so bad, why do so many people choose to live in them? It’s constantly implied Potter’s customers have no other choice, but what exactly does that mean? Why has no one else, including any of the businessmen on the board of the Bailey Building and Loan, developed rental properties that are higher in quality, lower in price, or both?

The inescapable truth is Potter is wealthy because he provides a product that most satisfies his customers’ preferences for quality and price. If there were an opportunity to provide a higher quality product at a lower price than Potter was charging, a competitor would do so and take market share away from Potter, until Potter either raised his quality, lowered his price, or both.

The Baileys burn with resentment that so many residents of Bedford Falls prudently choose to live in Potter’s less expensive housing than buy a house they can’t afford, financed by the Baileys’ Ponzi scheme. Thus, even after shirking their fiduciary duty to run the business properly, the Baileys spend decades assaulting Potter’s character in a transparent attempt to lure away his customers.

When the Depression hits and the Bailey Building and Loan is exposed for the fractional reserve fraud it is, Potter offers to come to the rescue with a generous offer to buy out its customers. It is noteworthy there is a run on the Bailey Building and Loan and the local bank, but Potter is financially secure enough to save them both, proving once again he is the only honorable businessman in the film.

But we must give the devil his due. George Bailey, the ultimate huckster, saves the building and loan without Potter’s help, convincing the yokel mob making a run on his business to keep their money tied up in his fundamentally insolvent confidence game.

That brings us to the one regrettable act Potter is guilty of, which is concealing the $8,000.00 the incompetent Billy Bailey inadvertently handed him while attempting to make a deposit. It’s true this was an underhanded act, although not unprovoked.

We don’t know how much Potter had invested in the Building and Loan to become a stockholder, but suspect it was a lot more than $8,000. One could make the case he was merely getting back some of the money the Baileys had previously defrauded him of, but there are courts for such matters and Potter should have sought their help if he had a case.

Nevertheless, two generations of Baileys had led a decades-long assault on Potter’s good name, resulting in most townspeople disliking him, even though he has quite literally saved their lives on numerous occasions. Without him, a large portion of Bedford Falls would be unemployed, have nowhere to live, or both. It is not an exaggeration to say that without Henry Potter, Bedford Falls would cease to exist. Yet, thanks to the Baileys, he is the most hated man in town.

Compare Potter’s vindictive reaction when George Bailey crawls to him for help after the $8,000.00 is lost to Potter’s reaction at the board meeting at the beginning of the movie. At the board meeting, Potter dismisses George’s unhinged attack upon him and redirects the discussion to the subject of the meeting: what is best for Bedford Falls. By the latter confrontation, Potter tries to have George arrested for embezzling.

Potter’s dastardly act is totally out of character with the Potter of the earlier scene or any other event we know of in Potter’s life. As far as we know, he has always been a hard-nosed, unsentimental businessman, but has never committed a crime or held a grudge, as he does now. Everything we know about Potter up to this point tells us his vindictive attempt to have George Bailey prosecuted is precisely the kind of emotional decision-making Potter has avoided for most of his life. That is why he is so wealthy at the beginning of the film.

Everyone has a breaking point. Potter had evidently reached his. Had he been prosecuted for keeping the $8,000.00, which may have been tricky from a legal standpoint, given that Billy Bailey had handed the money to him, he could easily have plead temporary insanity caused by years of psychological warfare waged against him by the Baileys.

We’ll never know, because before Potter has any opportunity to allow his passion to cool and clear up the misunderstanding, George Bailey sets off on his suicide melodrama, followed by a long, self-aggrandizing hallucination about angels and how Bedford Falls would be worse without him. By the time he concludes his childish escape from reality, the same yokels he previously conned during the Depression are now bailing him out once again, foreshadowing so many future bailouts of dishonest financiers whose assets should have been turned over to better management in bankruptcy court.

The Triumph of Evil

In one of the darkest moments of the film, George Bailey’s Christmas tree is jostled and one of the bells adorning it rings. George Bailey, now confident he and his fraudulent real estate scheme are safe, suggests the bell signifies an angel has earned his wings, as if his dishonest business dealings and ruthless defamation of legitimate competitors had divine sanction.

Nothing more is heard of Henry Potter, the man without whom Bedford Falls would not exist. He is left friendless and without the one thing he could cling to before George Bailey, the Devil incarnate, wrested it from his grasp: his honor. As the credits roll, evil has triumphed. The economic fallacies inherent in Baileyism become accepted truth, resulting in disaster after disaster, including the most recent in 2008.