Madonna and the Meaning of Democracy 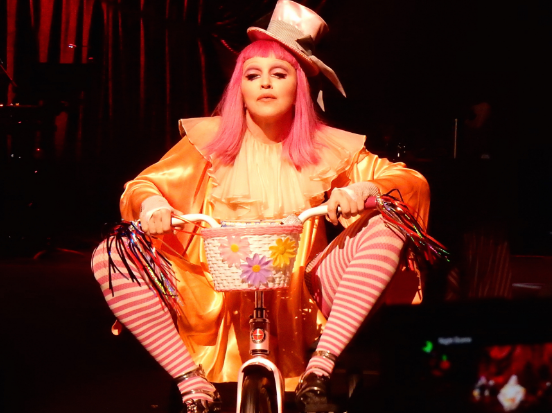 So what does Madonna have to do with the meaning of democracy? Well, apart from her feeling that she had been “betrayed” by the democratic process because “the percentage of women who voted for Trump was insanely high”, the answer is not much. Truth be told, she has nothing to contribute to the debate and nothing to add to the discussion, her banal pontifications notwithstanding.

In fact, and it’s confession time, the Madonna I had in mind was that other Madonna, whose motherhood is celebrated by Christians at this time of year along with the birth of her Son. But what does this Madonna, the Madonna, have to do with the meaning of democracy? This is a much more interesting question, rooted in the role of motherhood and the family in a true and healthy democracy. Truth be told, however, it was not this Madonna that I had in mind either. At least, not exactly. What I had in mind was a solitary statue of the Madonna in a small town in France.

In early December, the very same week in which Madonna had berated the women of America for not conforming to her own choice at the ballot box, the town of Publier in eastern France was ordered to take down its statue of the Virgin Mary to comply with a national ban on religious symbols in public spaces.

The image of the mother of Jesus was erected in 2011 on public land on the shores of Lake Geneva and had been the subject of local controversy because it was paid for with municipal funds. The court’s decision to order the local town council to remove the statue is rooted in French law which strictly enforces the separation of church and state. Whereas champions of France’s secularism support the legal enforcement of the statue’s removal, many others have criticized the decision on the basis that it represents a dangerous prohibition of the right to freedom of expression.

In response to the court’s decision, the town’s mayor announced that he would try to relocate the marble statue onto private land.

So what’s all the fuss about? Why not let the mayor remove the statue and put it on private land? What has this minor matter, this storm in a proverbial tea cup, to do with the meaning of democracy?

Well, shouldn’t we ask ourselves who should have the right to decide where the statue should be placed? If the people of Publier want the statue placed on public land and the local politicians are merely doing the will of those who elected them, what right does Paris have to impose its will on the local people? Shouldn’t the right to decide what happens in Publier be up to the people of Publier? Isn’t this what real democracy is all about?

This is but one example of numerous encroachments on the rights of small communities by oversized and burgeoning central governments. Take, for example, the decision of the European Union to decide the angle of curvature of the bananas that a local shopkeeper is allowed to sell, or the directive from the same European Union dictating the colour of uniforms to be used in small businesses throughout Europe. Or take the example of a stallholder on a street market in northern England who was fined for continuing to sell his produce in pounds and ounces, instead of the European mandated grams. And these examples are but the tip of a gargantuan iceberg.

The small statue in a small town in France has a great deal to do with the meaning of democracy because, in our present centralized political systems, democratic power continues to get further and further away from ordinary people and is being placed more and more into the hands of big governments that serve the interests of the rich and powerful at the expense of the ordinary man on the street. This is not democracy in any meaningful sense of the word. It is plutocracy, the rule of the rich and powerful. Modern plutocracy, whether it be in Europe or the United States, should not be allowed to continue wearing the label of “democracy”. The label is wrong. It doesn’t fit. In fact, it is several sizes too small for the obese thing which has usurped its name.