The Real Reason for the Anti-Trump Demonstrations 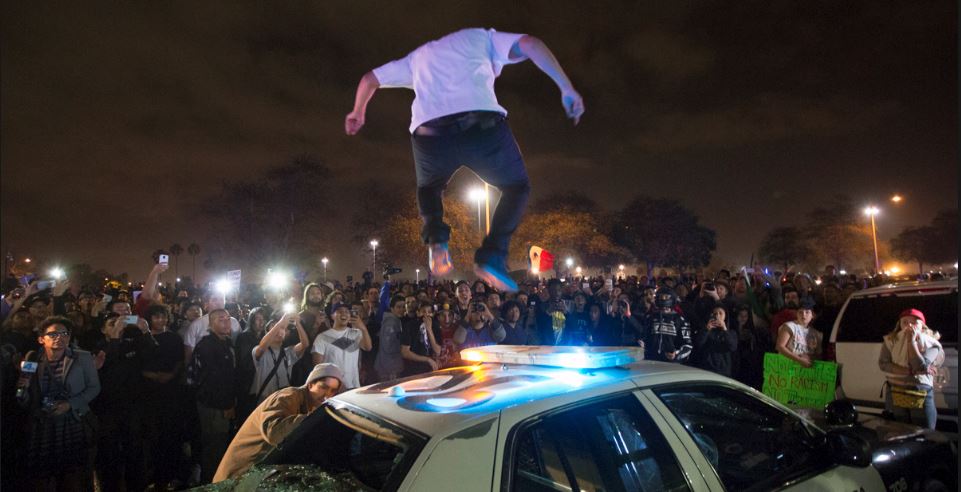 The anti-Trump demonstrations we now see in the streets are not just examples of the immaturity of many modern secular liberals, who seem to think that everyone else is somehow obligated to agree with them. They’re also a symptom of the distorted influence politics now exercises over our culture.

But in addition to being a symptom of our culture, the dominance of politics in every aspect of life is also a consequence of liberalism itself.

The tendency of liberalism has always been to politicize everything. Thanks to liberalism, we have a politicized media that has abandoned journalistic standards in a misguided attempt to engineer who gets elected; a politicized education system in which whole disciplines—English, history, and even science—have been enrolled in the service of ideological goals; and even a government that, in addition to the politics already inherent in it, has been made subservient to special-interest politics.

Russell Kirk, the father of modern conservatism, had a name for it: ideology. Although we often use the word in a generic sense to refer to someone’s specific political orientation, Kirk’s definition was more specific (and useful).

An ideology, as Kirk defines it, is a political religion.

Ideology takes politics from its more natural subordinate position in cultural life and exalts it to the highest position. It redefines truth as political manipulation, it turns ethics into political utility, and it re-imagines political success as earthly salvation—and political failure as apocalypse.

The political philosopher Eric Voegelin called it “immanentizing the Eschaton,” an exotic expression which, when properly parsed, just means viewing this world as all there is, and, therefore, the ultimate thing.

Liberals have always accused social conservatives of bringing religion into politics, but liberals have done something far worse, and far more radical: They have made politics their religion.

In this respect liberals have much in common with Muslims, who also conflate politics and religion. What they really want is liberal Sharia law, a secular theocracy.

The minimum wage, gender equality, nationalized health care, and global warming—whatever their practical virtues—are not just expedient policy prescriptions. They are essential aspects of the liberal fatwa. Feminism, deconstruction, and gender theory are not just academic abstractions up for discussion among liberal academics: They are articles of their religious creed. Question them and you are not just wrong—you are a heretic.

You wonder why the left is having a nervous breakdown in the wake of Trump’s election? It is because, for them, politics is the means to secular salvation. This means that, to them, political failure is not just a setback on the road to a more stable society—it is a blow to their very worldview. Opposition to their program is not just wrong-headed, but evil.

This is why all of the excesses of these demonstrations—death threats, looting, violence—can be excused by CNN and MSNBC: They are the necessary extreme measures, justified in light of the threat to their ideology.

The challenge for conservatives is to avoid the kind of radicalism seen on the left, and to articulate a politics that is truly secular; that is to say, that does not usurp the place of religious faith. What is needed is a politics that takes religion into account in the practical dealings of life, but that does not make politics an idol.

Conservatives need to be clear about what they are fighting against: A political ideology that threatens our politics by worshiping it.