The First Known Depiction of a Witch on a Broomstick 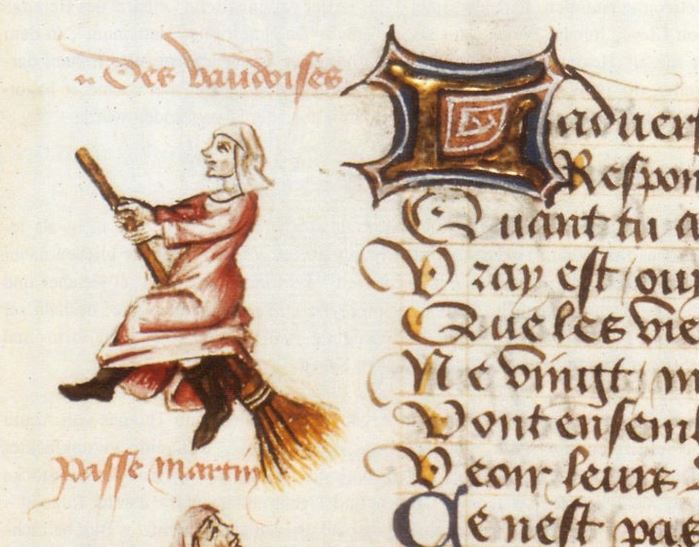 The visual of the witch on a broomstick is so ubiquitous as to be benign. Before the Wicked Witch of the West or Harry Potter took flight on the spindly cleaning tool, the image first appeared in the 15th century. Two women in marginal illustrations of the 1451 edition of French poet Martin Le Franc’s Le Champion des Dames (The Defender of Ladies), a manuscript now in the Bibliothèque nationale de France(BNF), are soaring, one on a stick, the other on a broom.

According to Witchcraft in Europe, 400-1700: A Documentary History, edited by University of Pennsylvania history professors Alan Charles Kors and Edward Peters, Le Champion des Dames has “the first such illustration in the pictorial history of witchcraft.” Le Franc’s long poem about virtuous women is interrupted by a discussion of witchcraft, and the covered heads of the two women marks them as Waldensians. This Christian movement emerged in the 12th-century. With its tenet that any member could be a priest, even a woman, and perform sacraments and preach, the bloody ire of the Catholic Church soon followed. That these heretics would also meddle with the supernatural was not a leap, but why the broomstick?

Dylan Thuras at Atlas Obscura wrote that the “broom was a symbol of female domesticity, yet the broom was also phallic, so riding on one was a symbol of female sexuality, thus femininity and domesticity gone wild.” The two women in Le Champion des Dames importantly don’t appear deformed or grotesque, they are ordinary; their corruption cannot be visually perceived. And pagan rituals before the 15th century had involved phallic forms, so the shape of the brooms . . .

Read the Article at Hyperallergic.com