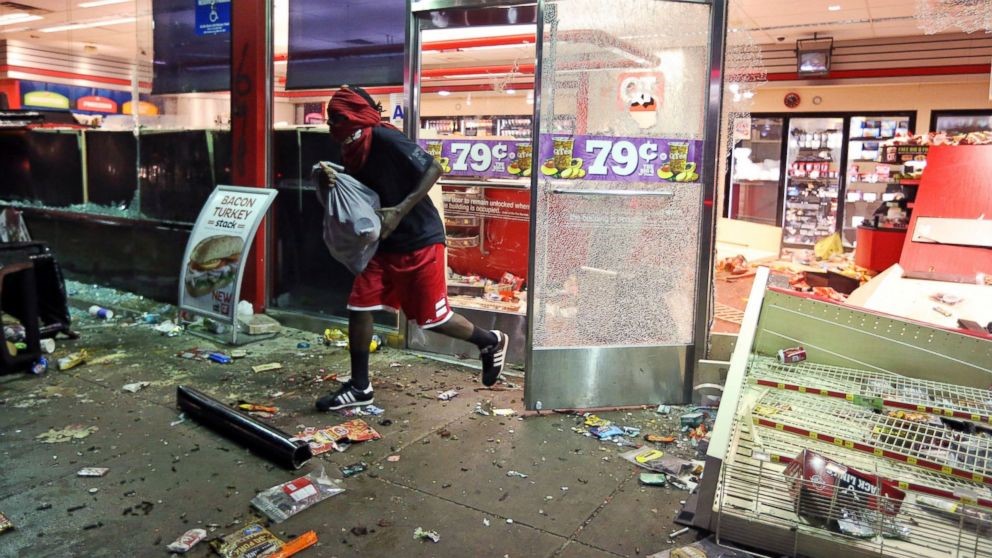 Is it reasonable to be angry at legitimate police brutality and to want justice? Absolutely. But let’s be honest about what we’ve seen play out too many times in America.

Building on the anger surrounding the 2012-2013 Trayvon Martin trial results, things really kicked off with Ferguson in 2014. Before any real details were known about the shooting of Michael Brown by a white police officer, Black Lives Matter was born and the city was burning to the chants of “hands up, don’t shoot”.

Even then, there was the question of how looting helps the cause of those concerned about police violence. It seemed to many Americans to be quite hypocritical, inspiring memes and cartoons such as the following:

The spark that ignited the riots is always the shooting of a black man. Never, though, do the rioters wait for all of the facts to come in. Instead, Black Lives Matter immediately starts a riot and the media dutifully calls it a “protest”. As the facts dribble in, we often learn that the initial story was quite wrong.

Knowing that, when we look again upon the smoldering wreckage of neighborhoods and stores that were looted and burned to protest police brutality by the very people who live and work in those neighborhoods, we no longer wonder about the legitimacy of the cause, we completely doubt it.

And that’s exactly what has happened in Charlotte. We’ve been treated to scenes of anarchy and looting, with a mob attempting to toss a photographer into a fire, a white man dragged and beaten by a group of black men, a rioter killed by another rioter, and, oddly enough, police attempting to save or protect wounded or killed rioters – the very people trying to harm them.

While the chaos ensued we learned a lot more about Keith Lamont Scott and his unfortunate demise. It turns out that he has a criminal record in three states, that, allegedly, there is police footage of him holding a gun, and that the police officer who shot him is black. A picture of a gun at the crime scene was also shared by Channel 9 in Charlotte.

The video Scott’s daughter made immediately following the shooting of her father and live-streamed to Facebook is also a mixed bag. It starts with her yelling, no doubt in shock, the following at the police at the crime scene:

The video continues in a similar manner until she learns that her father actually died at which point it is truly heartrending. Despite the vulgarity and apparent hate earlier in the video, one cannot help but be sympathetic to the girl.

That video no doubt stirred the emotions of many, but as the black police chief of Charlotte, Kerr Putney, stated:

It’s time for the voiceless majority to stand up and be heard…It’s time to change the narrative because I can tell you from the facts that the story’s a little bit different as to how it’s been portrayed so far, especially through social media.

Again, as heartrending as that video may be we must seek justice and, unfortunately, the wheel of justice grinds ever so slowly. These things take time to work out, it doesn’t happen like an episode of C.S.I. or Law & Order.

So far in these big cases, both independent investigators and the courts seem to have done their jobs in providing justice. Yet a large portion of the population simply does not trust the police or the courts. Furthermore, too many in the black community are refusing to look at the facts and simply want to blame all whites, even when it is black officers doing the shooting in cities that are entirely lead by black individuals (e.g., Baltimore).

Clearly, we have a problem.

Furthermore, when we learn of the actual statistics on shootings in various cities, we wonder too why there are protests only when the police do the shooting. What about the thousands of black men shot by other black men across the country? What about the black toddler or mother shot and killed by a stray bullet fired by a black man? Are they not worthy of a protest or a riot?

In Chicago, 75% of the people murdered are Black while 71% of those committing murder are also Black. Doesn’t that seem worthy of a protest? Or how about in Minneapolis… There, rioting broke out on July 9 to protest the shooting of Philando Castile by a Hispanic police officer on July 6. In between July 6 and July 9, do you know what happened? On July 8, a black toddler was wounded while another black toddler was killed (pictured below) in a drive-by shooting. People turned out to mourn the loss of the child, but there wasn’t a wave of outrage and anger through either the black community or the media that merited much local or national attention. No, Black Lives Matter and the media kept the focus on Philando Castile rather than switching gears to the death of this innocent child.

Yes, the argument has been made before but it must be made again. In Charlotte, people immediately rioted before hearing the facts. That smacks of people who seek not justice, but rather anarchy and the toppling of the current order.

Perhaps rioting and violence is easier than taking the time for introspection and personal change within a community that is in desperate need of a metamorphosis. What a shame.